Arts & Culture Apeksha Bhateja I Couldn't Travel, so I Read 100 Books Instead

From a pre-Angkorian temple in a cave that is being swallowed by stalagmites to a temple in the grip of the jungle, you’ll want to visit these ten temples in Cambodia.

With a rich history tracing back to the 5th century BC, Cambodia offers eons of history, culture, and tradition. Despite the emotional and physical damages done to the country in its recent past, the country is increasingly attracting international guests. Cambodia is experiencing record numbers of visitors, all eager to discover the famous Angkor Wat and Khmer cultures. While Angkor Wat no doubt deserves its acclaim, Cambodia also offers a wealth of other temples to be discovered. Beyond the well-known town of Siem Reap, the cities of Battambang, Sihanoukville, and Kampot, among others, are home to ancient temples and ruins, chock full of history, religious significance, and intrigue.

Due to the age, fragility, and cultural importance of Cambodia’s temples, guests should treat these ruins for what they are: national icons and delicate structures that need to be preserved for future generations. Tread with care and avoid touching ancient statues and stones as much as possible.

Arts & Culture Apeksha Bhateja I Couldn't Travel, so I Read 100 Books Instead 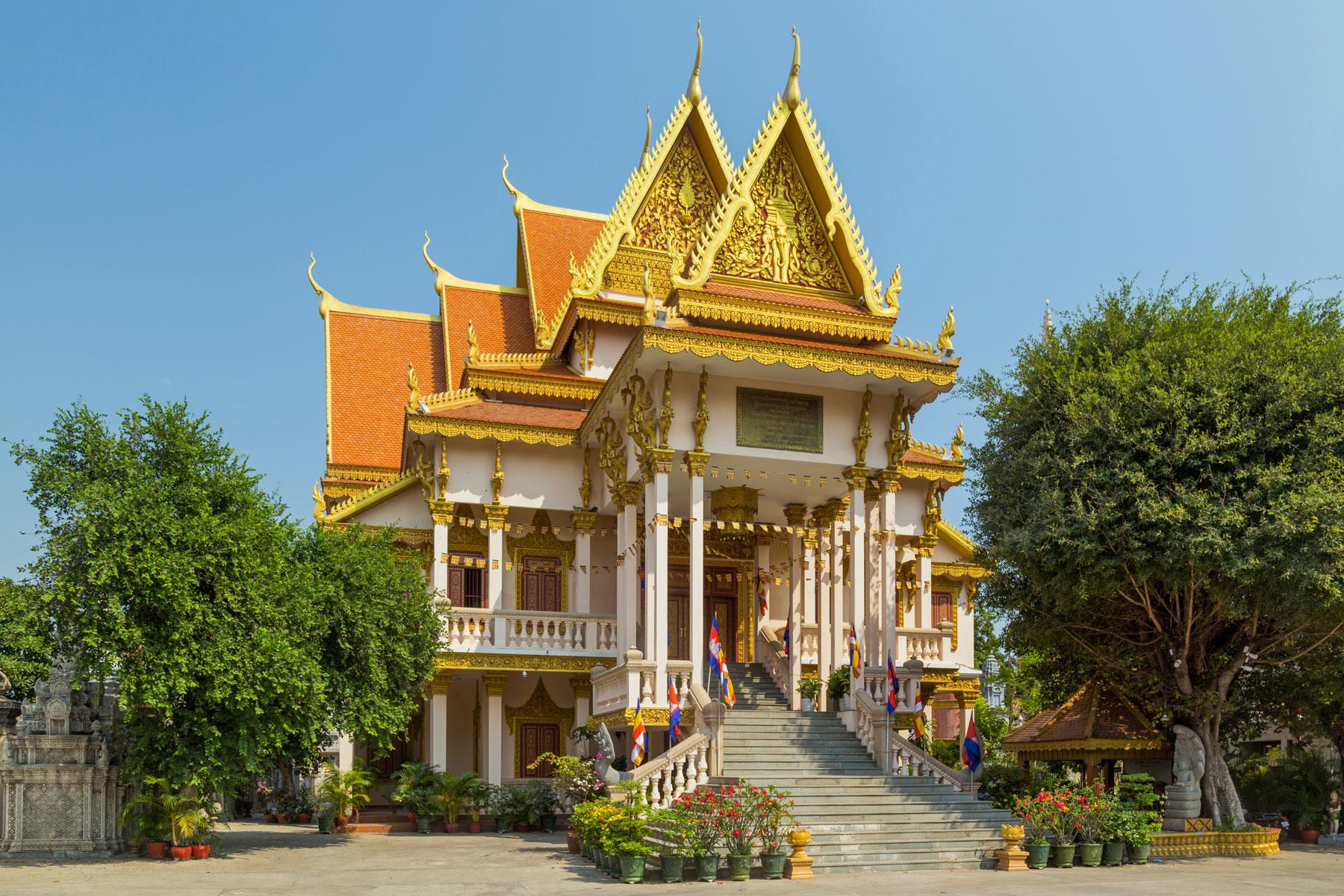 As one of the five original wats or monasteries, built in Phnom Penh in 1422, this colorful temple in the city center attracts tourists, monks, and those seeking a quiet respite from the temple’s lively —and sometimes overwhelming—urban surroundings. Thanks to its role as a storehouse during the reign of the Khmer Rouge in the late 1970s, Wat Langka was saved from the state-ordered destruction that befell many surrounding temples in the area. It remains in amazing condition, despite its age. Named in honor of the order of Sri Lankan monks who resided within, Wat Langka now houses religious writings and texts and is a place of national significance.

INSIDER TIPAt Wat Langka, as well as with most Hindu and Buddhist temples, modest dress is expected; women should plan to cover knees and shoulders. Vendors are often found outside major temples with sarongs for sale if you’re caught unprepared. 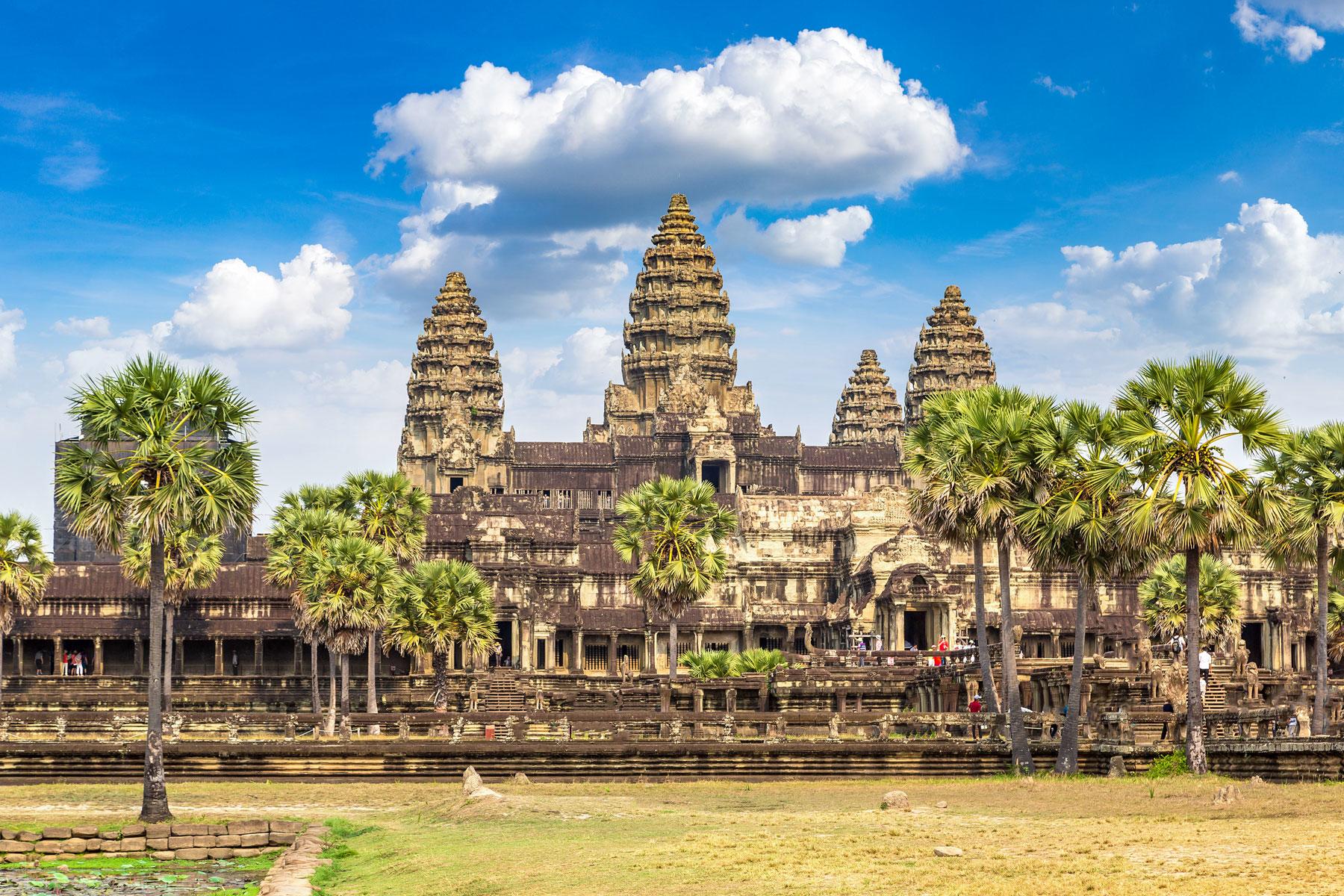 Arguably the most famous temple in Cambodia, if not all of Asia, Angkor Wat is only one of approximately 50 temples within the Angkor Archaeological Park, a UNESCO World Heritage Site—but it’s by far the most well-known.  Its breathtaking presence has impressed visitors for nearly 1,000 years, with construction dating from sometime between B.C. 1113 and 1150. Originally a Hindu temple dedicated to Vishnu, Angkor Wat was converted to a Buddhist temple in the 14th century and later served as the capital of the Khmer empire.

Visiting with a guide is the best way to fully understand the temple’s exquisite bas-reliefs, statues, and architecture. As Cambodia’s popularity with western tourists grows and the effects of erosion continue to impact Angkor, and all temples within the complex, be mindful of where you walk and touch as little as possible to prevent damage.

INSIDER TIPIf you plan a sunrise visit to capture Angkor’s famous golden morning light, be prepared for large crowds. The gates open at 5 a.m., so purchase your entry tickets the day before to save time. 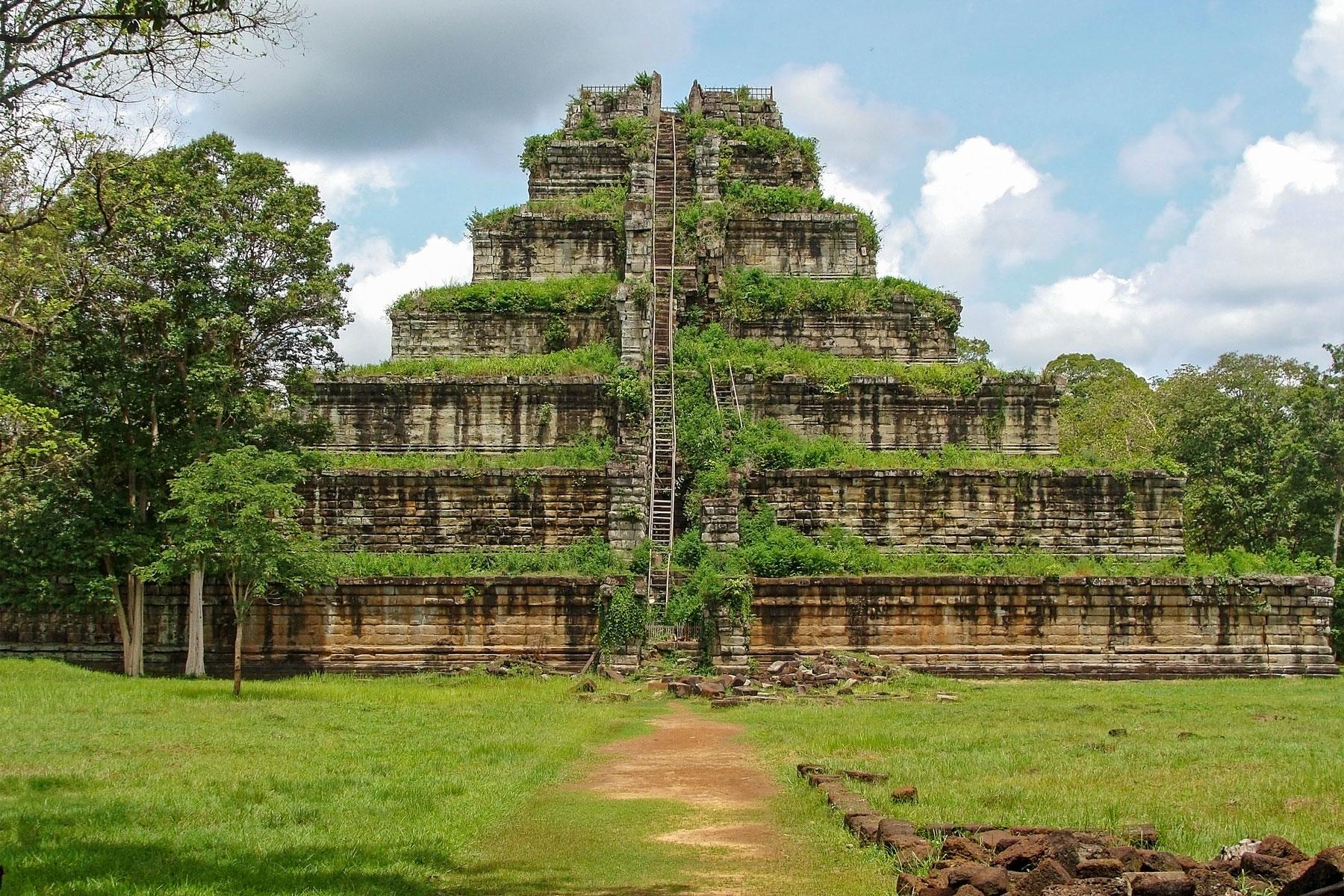 The recently discovered jungle town of Koh Ker, still an active excavation site, is set in a remote part of the country about three hours via bumpy roads from Siem Reap. For those with time to explore this relatively unknown part of Cambodia, Koh Ker offers over 180 temples—but only about 20 are safe for visitors due to ongoing landmine clearing. Some of the finest examples of Khmer architecture can be found at Prasat Banteay Peechean and in the Prasat Prang complex.

INSIDER TIPThere are no accommodation options in the temple area and camping is not allowed. Koh Ker (5 miles away) has limited accommodations, but more options can be found in Preah Vihear (about 45 miles away). 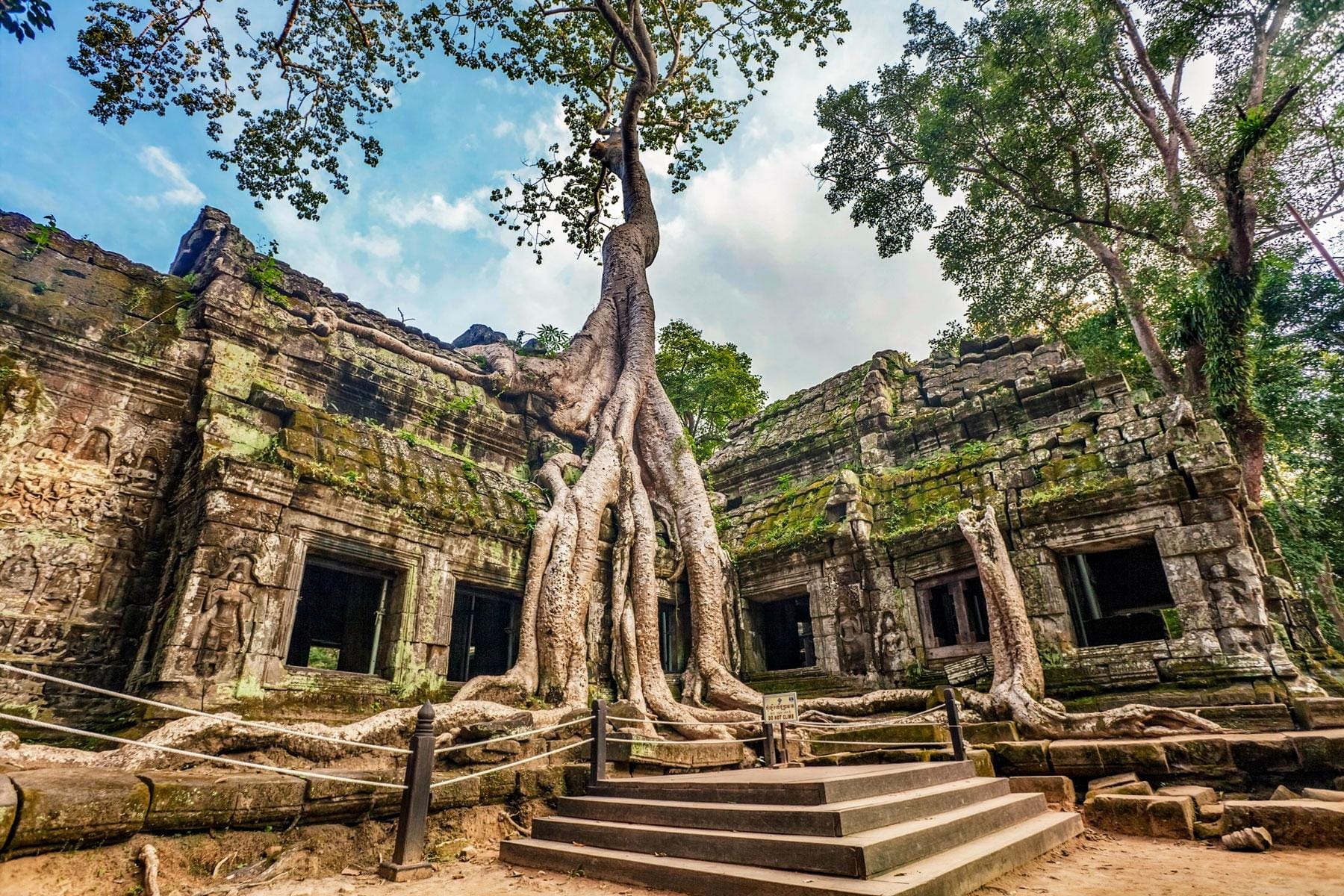 The maze-like corridors, crumbling stones, and monumental trees draw visitors to Ta Prohm, eager to explore its structures before they’re swallowed up by the ferocious surrounding jungle. Actually, Ta Prohm is maintained, as are all Angkor temples, but several large banyan, fig, and kapok trees have been left in place as they were found. Their roots appear to hold on the temple with a mighty grasp, a testament to the power of nature, creating a beautiful illusion of how Angkor would have appeared when first rediscovered by French explorers in 1860. As the jungle continues to grab hold, wooden walkways and support structures have been installed around the temple, with all guests asked to remain on the paths.

This expansive Buddhist temple was first built around the mid-12th century. In its heyday, it took 79,365 people to run the temple, including 18 great priests, 2,740 officials, and 615 dancers, all documented in the Sanskrit inscriptions still legible in the stones.

Forget about the temple’s modern Tomb Raider fame (it was used as a location in the film) and try to imagine it as it once was: a bustling metropolis of activity, wealth, and culture.

INSIDER TIPMost day visitors will arrive in the Archaeological Park and head straight for Angkor Wat. Bypass it and visit Ta Prohm first for smaller crowds and beautiful morning light. 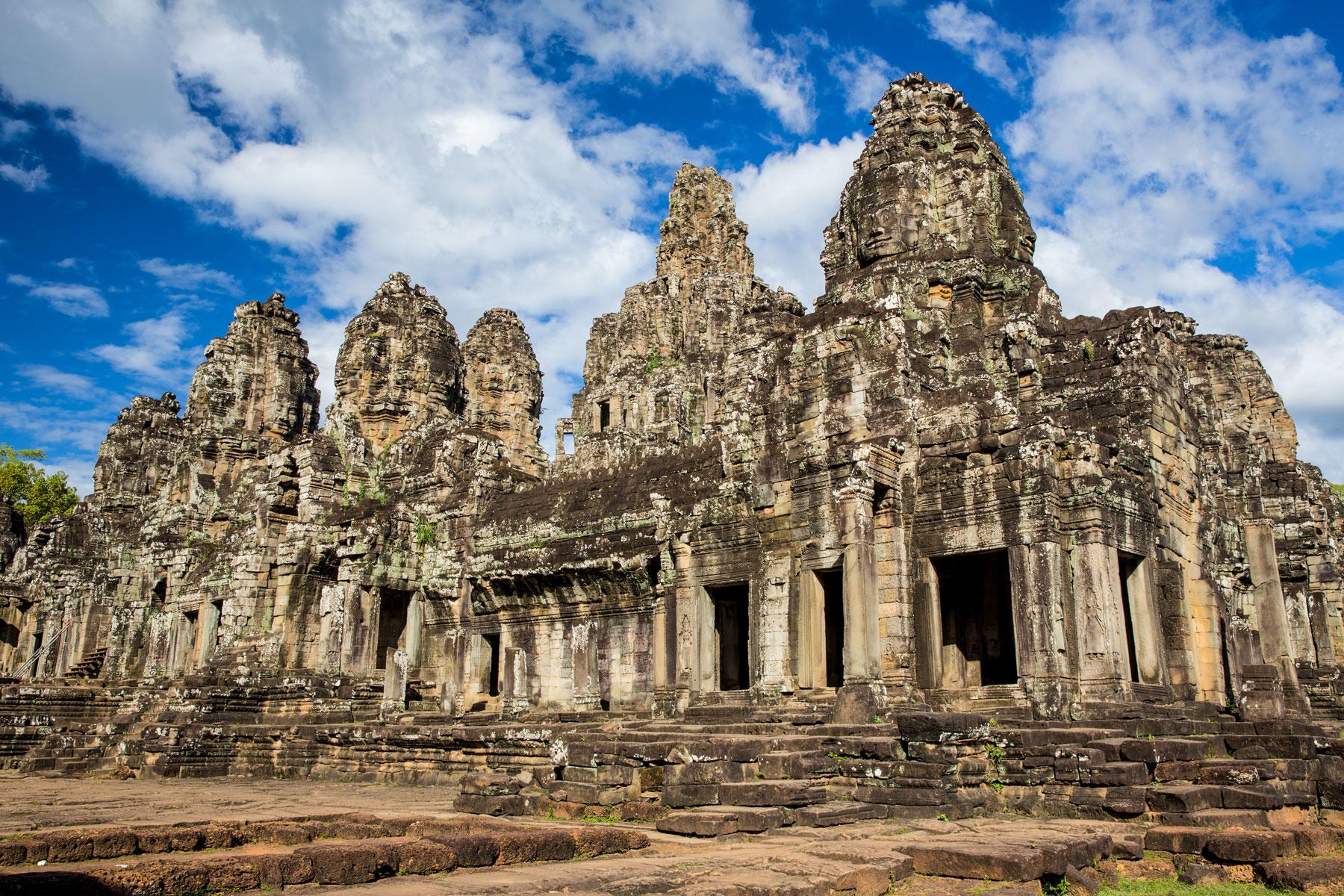 It’s okay to feel a little uneasy at Bayon; with over 200 smiling stone faces staring back at you, this Buddhist shrine is unlike anywhere else. Scholars believe the faces are all representations of Jayavarman VII, a powerful Khmer king of the late 12th century, and perhaps are a testament to the power of ego. After the reign of Jayavarman VII and his son, the temple was later converted to a Hindu place of worship, resulting in statues and art from both religions throughout the complex.  Many well-preserved mythological scenes are still visible in the temple’s bas-reliefs. Hire a guide for context and deeper understanding.

INSIDER TIPBe prepared for the fact that you are likely to be inundated by children, aggressively selling trinkets, cold drinks, or snacks at popular temple sites. While kids are so difficult to resist, NGOs universally advise not to give money to children selling on the streets as you are supporting a labor market for young children who should not be working. Working on the streets prevents these kids from getting an education and exposes them to predators. If you want to help Cambodia’s kids, support a literacy organization like Room to Read. 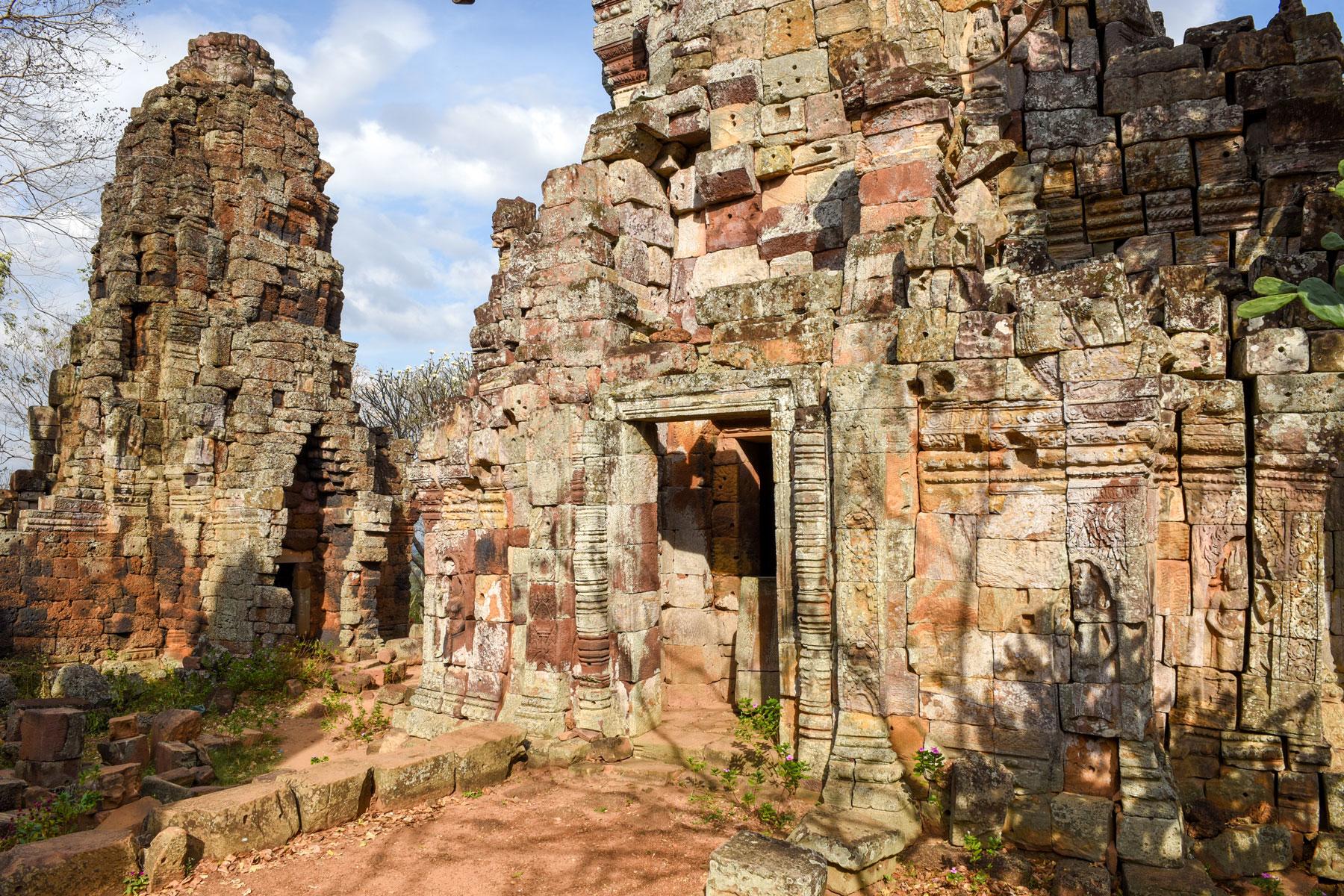 This Angkor-era mountaintop temple has sadly been a victim of looting over the years but it still merits a visit for its stunning views and intricate carvings. From the top of the temple, gaze out over lush rice fields, traditional villages, and dramatic mountains. Notable architectural features here include carved lintels above doorways, and the five distinctive towers of the temple, a key architectural element of Khmer temple design and all of which are still intact. Despite the years of neglect and pillaging, it is still one of the best-preserved Khmer temples in the Battambang area, and is a great opportunity to explore a temple very similar to Angkor Wat, without the hordes of tourists.

INSIDER TIPAlways stay on the marked pathways, as there may be undiscovered landmines in the area, a constant and dangerous reminder of the Cambodian Civil War. 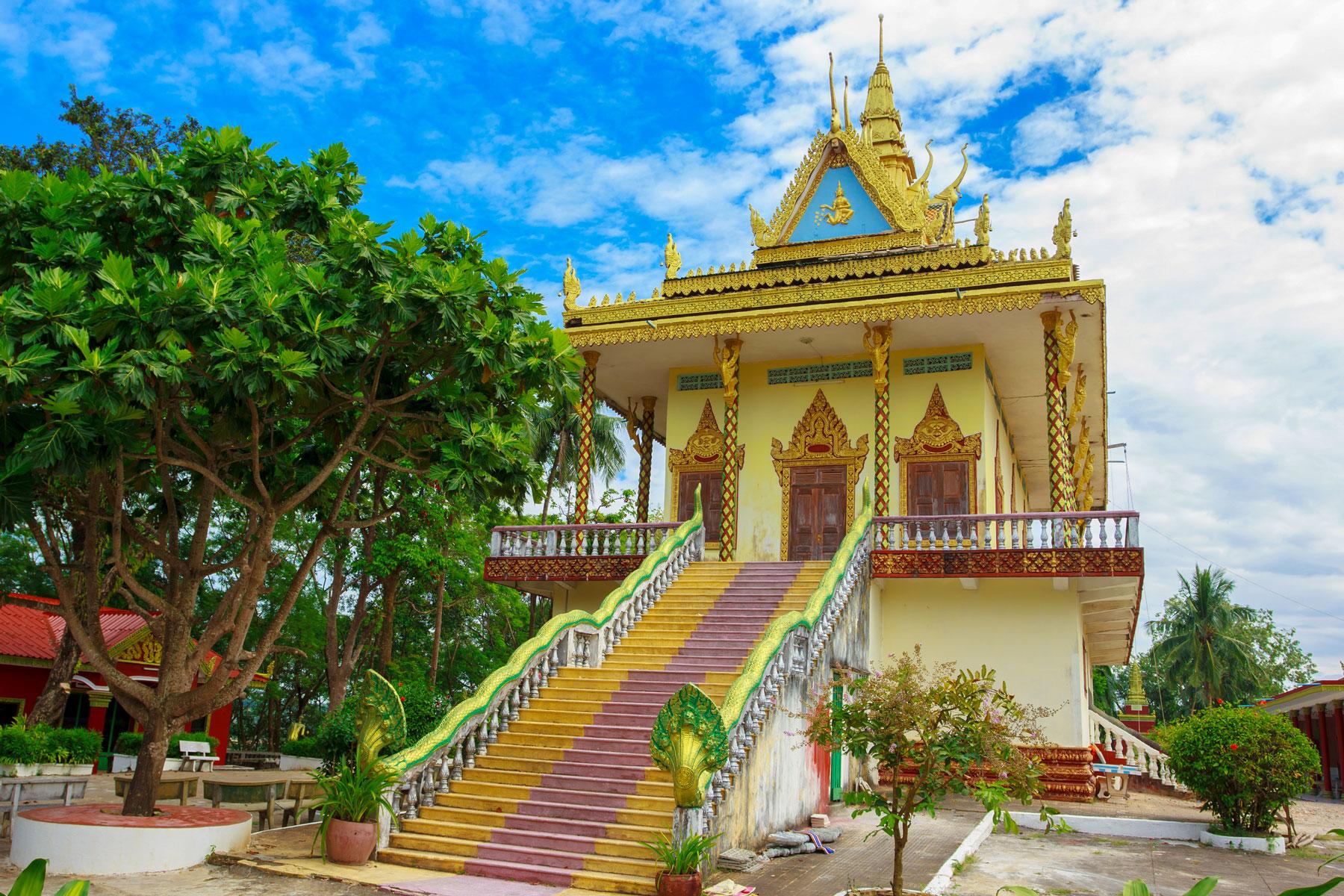 Although Sihanoukville is known more for its beaches and laid-back party atmosphere than its temples, it’s also home to five major Buddhist temples, or wats. If you can tear yourself from the sun and surf, Wat Leu is both culturally and architecturally significant, and worth a visit. Look for the three-headed white elephant carved into a stone wall, and enjoy the city views from the glistening golden pagoda, perched on a peaceful mountaintop above the town below. Atop the delicately carved elephant heads, three images of Buddha can be seen, their hands in prayer.

INSIDER TIPOn your way down, pay a visit to Wat Kraom, also known as “Lower Wat,” along Independence Beach at the foot of Sihanoukville Mountain. 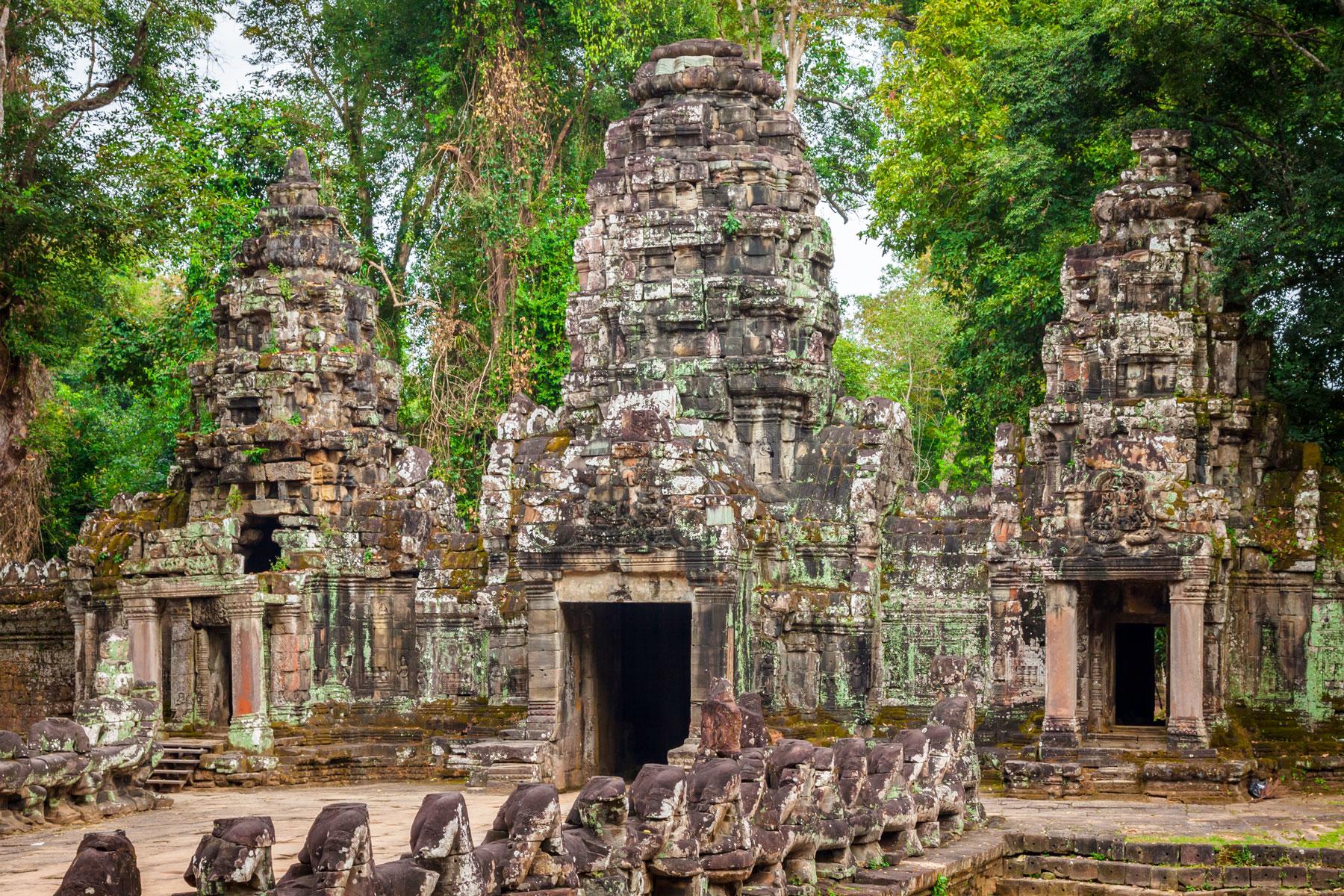 Part of the Angkor complex, Preah Khan is a somewhat overwhelming puzzle of corridors and statues and is one of the largest temples in Angkor. It’s also one of the best maintained, thanks to ongoing efforts by the World Monuments Fund, an international organization dedicated to preserving cultural sites. Its unique history means it’s a mixture of both Mahayana Buddhism and Hinduism, with separate shrines for the gods Shiva, Vishnu, and Brahma. Allocate at least two hours to make the most of Preah Khan, taking in the reliefs and carvings, including the Churning of the Ocean of Milk bas-relief, a pivotal story in Hindu teachings. As you explore, look out for the seemingly out-of-place structure on the temple grounds resembling a Grecian temple; its origins are unknown and historians can’t explain it.

INSIDER TIPPreah Khan was a place for both worship and education. Angkor Conservation in Siem Reap houses inscribed stones from the temple that tell stories of the temple’s past. 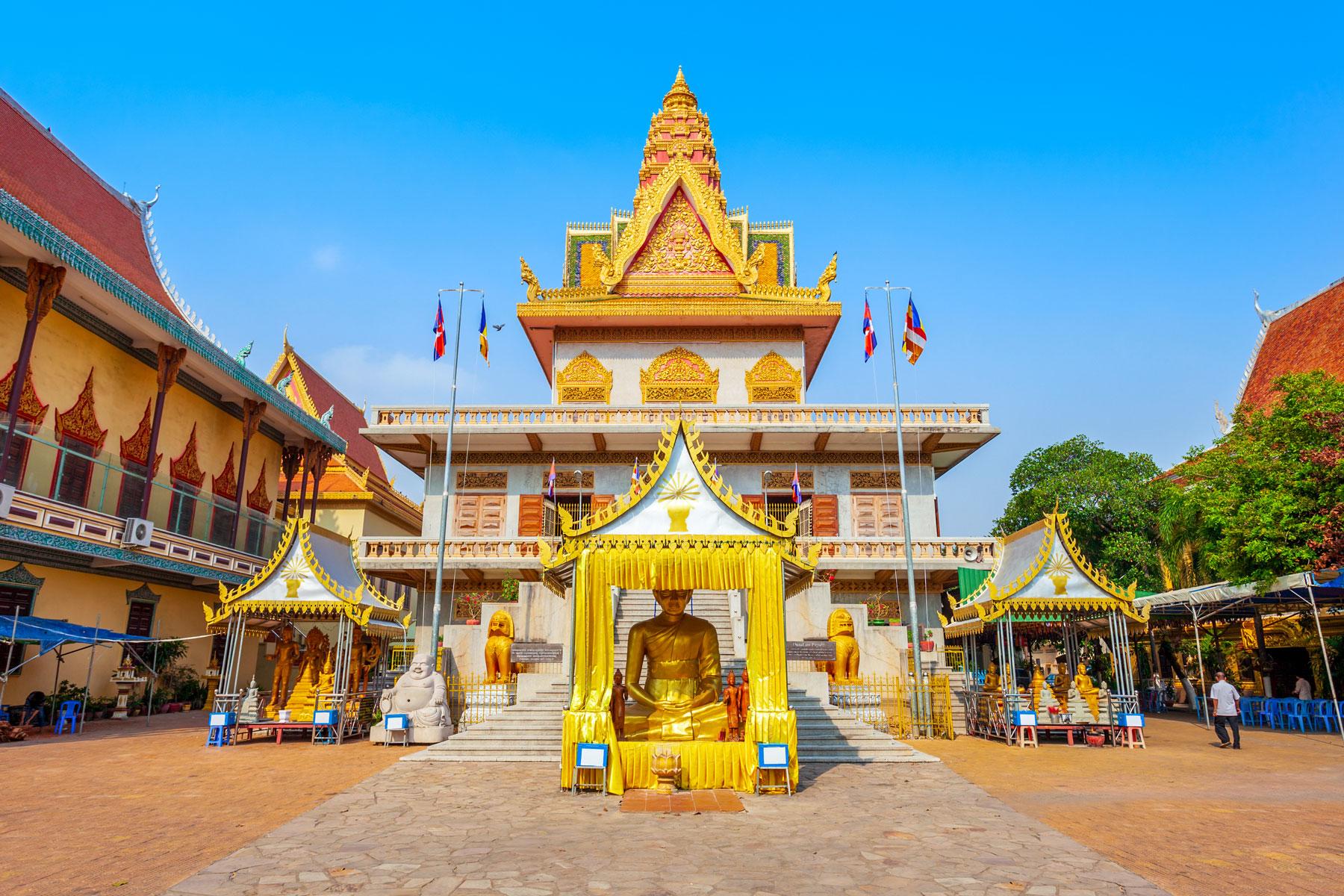 This 15th-century temple is admired for its beauty and prominence within the city but it also a functional place of learning and worship and is respected as the center for Cambodian Buddhism. The highlight here is a Chetdai dating to Angkorian times and said to contain hair from one of the Buddha’s eyebrows. Join the resident monks in daily guided meditation sessions to find a moment in peace in the country’s capital. The resident monks are patient and helpful. 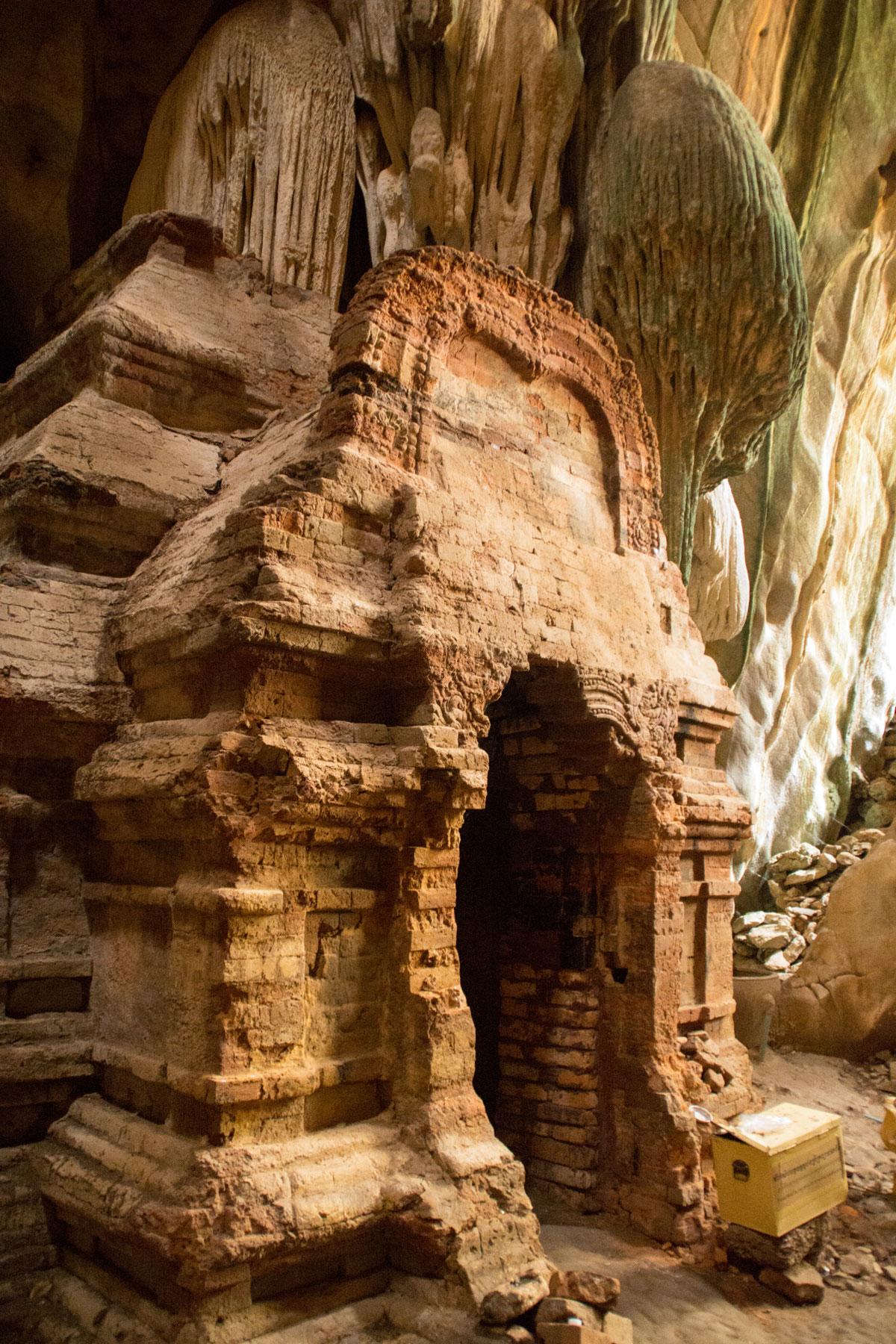 To visit Phnom Chhnork, Cambodia’s only cave temple, descend stone steps into an elaborate system of limestone caves, which are some of the largest in the region. Built during the 7th-century Funan Kingdom, this small but unique Hindu temple is a purpose-built brick shrine in dedication of Shiva. Stalactite and stalagmite formations are gradually growing over the ruin: look for the limestone formation in the shape of an elephant, a significant figure in Hinduism. Adventurers armed with flashlights can continue into the cave’s secondary chamber, where a second small shrine can be found, though most visitors find it less impressive than the first.