A mighty Moroccan dynasty was spreading its power across Africa when a pandemic triggered its downfall.

After the hectic, labyrinthine medina of Rabat disappeared behind me, another Moroccan walled city soon came into view. The sandy ramparts of Chellah stretch alongside a quiet hillside in the east of the busy Moroccan capital. They surround the remains of a grand necropolis—imperial tombs, a mosque, an Islamic college, and a stele tower.

This is one of the oldest sites of settlement in Morocco. The Phoenicians lived here for more than 2,000 years and were replaced not long after by the Romans, who transformed Chellah into a thriving city on the banks of the Bou Regreg River.

Yet it was a Moroccan dynasty, which arrived here many generations after the Romans, that left the most tangible imprint on Chellah. The giant walls before me were erected by the Marinid Dynasty to protect the huge necropolis it built here.

While they offered fine protection against human foes, these fortifications were powerless to halt one particular invader. An invisible assassin snuck into Chellah and Rabat in the mid-1300s and decimated this area. The Black Death had arrived. It would derail the Marinid Dynasty. 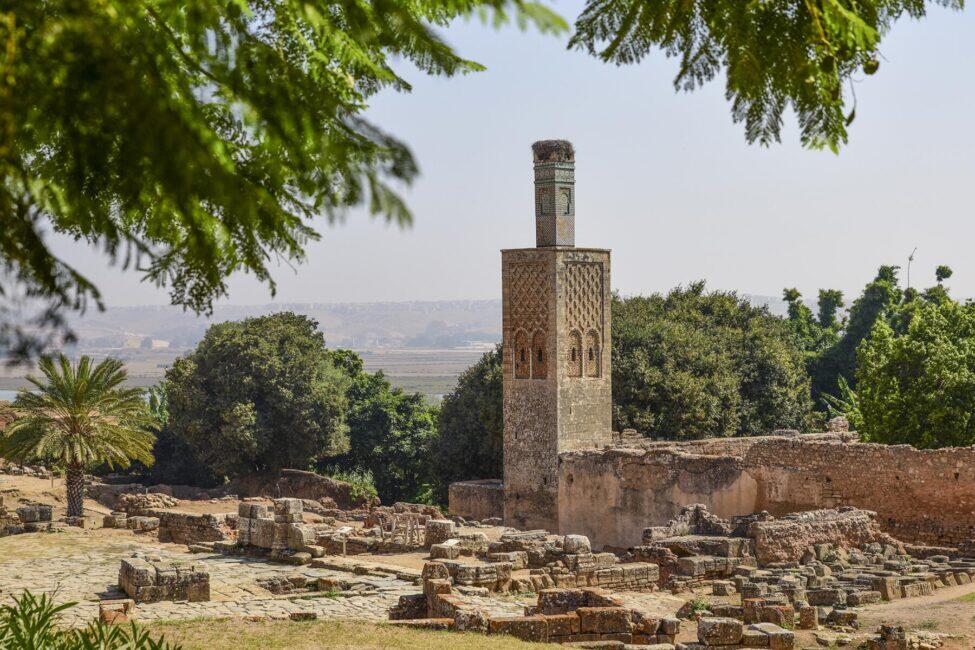 Morocco had been afforded time to prepare its response to this bubonic plague pandemic. This infectious disease, which ended up killing more than 25 million people worldwide in just five years, had been rampant in Europe for many months before it leaped the Strait of Gibraltar and crashed into Morocco.

The eerie way the Black Death emerged and its horrifying effects on the human body make COVID-19 pale by comparison. It exploded across Europe due to a squadron of so-called “death ships.” In October of 1347, the southern Italian seaside city of Messina welcomed 12 vessels from Central Asia. Italian port workers boarded these ships to find a scene seemingly transplanted from a nightmare. Each boat was littered with disease-ridden corpses. The surviving sailors resembled zombies, their malnourished bodies laden with enormous, bloody boils.

There was no precedent for such a situation. The Italian authorities had no idea what they were dealing with. Although they did not allow the plague-infected bodies to be removed from the ships, which they sent back out to sea, the contact between the port workers and the diseased victims was sufficient for the Black Death to spread. It surged across Italy and then Europe, laying to waste town after town, city after city, nation after nation.

As this catastrophe grew, the Marinid Dynasty flourished. The sultan who drove its expansion is buried in Chellah. In searing midday heat, I wandered through the dusty remains of this necropolis until I found the large stone tomb of Abu al-Hasan. An earthquake in 1755 caused extensive damage to Chellah but al-Hasan’s mausoleum is still standing, albeit in a degraded state. 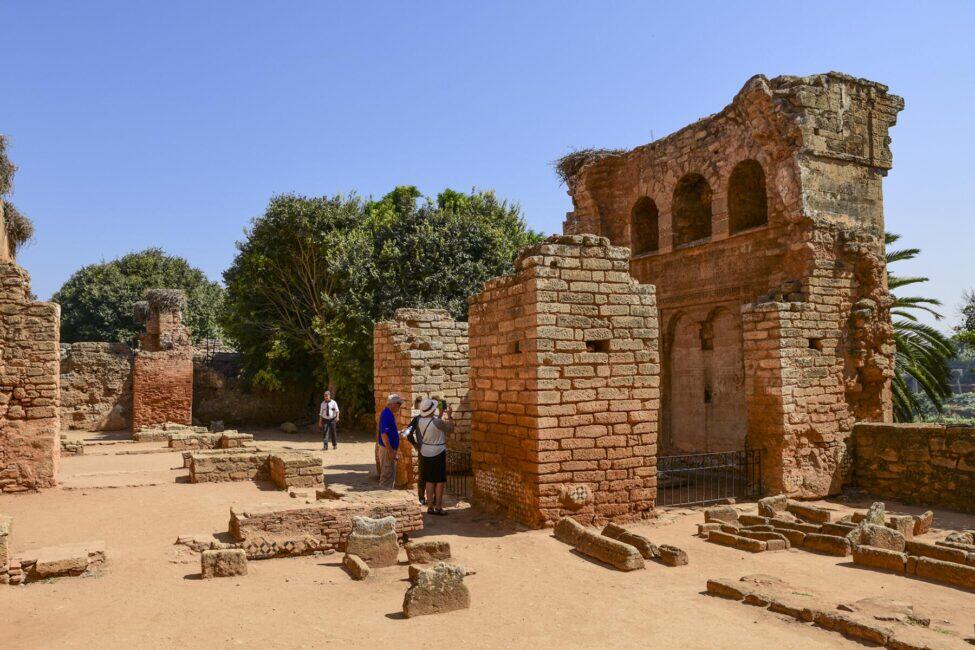 The Marinid Dynasty had ruled Morocco for more than 80 years when al-Hasan took command of it. Their reign began in 1248 when they seized the Moroccan city of Fez, which became the Marinid capital. This extraordinary city is now one of the most popular tourist destinations in Africa due, in part, to several magnificent buildings left behind by the Marinids. Amid the thousands of winding streets of Fez’s walled city is a Marinid creation which is one of the most striking Islamic structures on the planet.

Some buildings shock you with their size, others impress you with their modernity. But it was the sheer depth of creativity and craftsmanship that entranced me as I stood in the splendid courtyard of Fez’s 14th century Bou Inania Madrasas. No space within this Islamic college was left without decoration. Yet this intense weave of design works perfectly.

The Islamic religion was the foundation of the Marinid Dynasty and so, all across Morocco, they constructed Islamic colleges like this. Bou Inania’s intricate floor tiles complement its stunning wall mosaics, Islamic calligraphy inscriptions, delicate wood carvings, and masterful stucco work. The palette of colors on display ranges from cream through to brown, gold, mint, sky blue, aqua, and black. 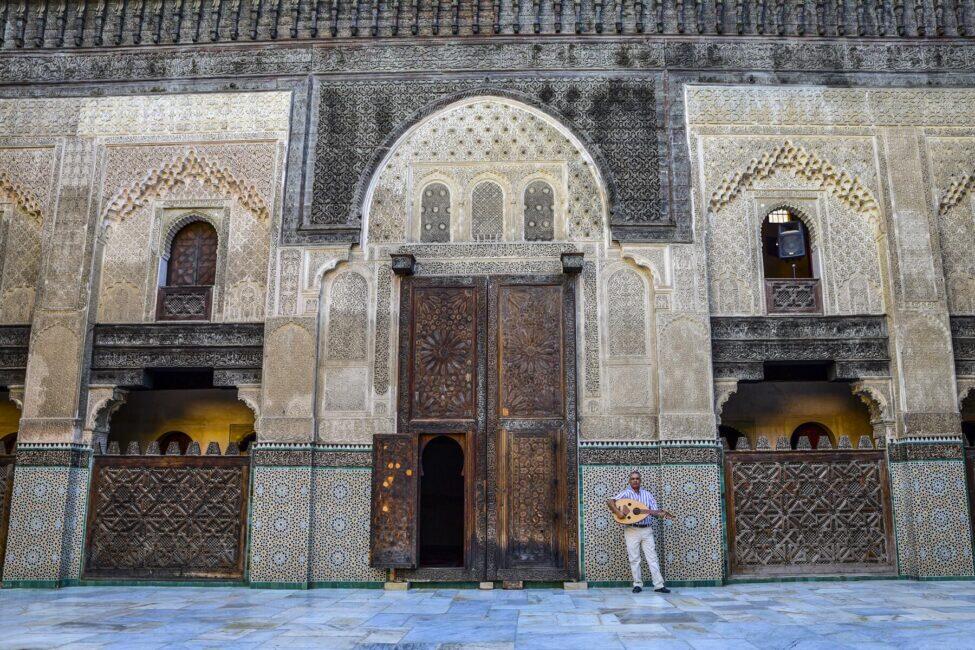 Bou Inania was intended to be a grand symbol of the wealth and success of the Marinids. During the 1340s this dynasty had reached its zenith, spreading its influence more than 600 miles east of present-day Morocco to the nations of Algeria and Tunisia. At this point, Fez was one of the world’s largest cities and a revered center of intellectual and cultural brilliance.

Yet by the time Bou Inania was completed in 1356, the Marinids were in decline due, in part, to the invasion of the Black Death. In 1348, the year after the plague ambushed Europe, it took root in Morocco with devastating effect. It is estimated that, in the following four years, the Black Death killed up to half of the Moroccan people. Incredibly, it was nearly 200 years until this country’s population returned to its previous amount.

As the plague caused corpses to pile up across Morocco in 1348, its society descended into chaos. The Moroccan people panicked, and terrified, lost confidence in their sultan Abu al-Hasan. This same year, al-Hasan lost a battle in Tunisia and was forced to flee by sea. Soon after, as he attempted to return to Fez, his son Abu Inan betrayed him, declaring himself the new Marinid sultan.

Wounded and with little military support left, al-Hasan eventually surrendered to his son and then perished from an infection in 1351. Along with him was buried the glory era of the Marinid Dynasty. Although it continued to wield considerable power in Morocco for more than a century thereafter, this sultanate was slowly expiring. It had been placed on this path of decay by the Black Death. A once fearsome Moroccan empire diminished and eventually dissolved in the wake of the world’s worst-ever pandemic.