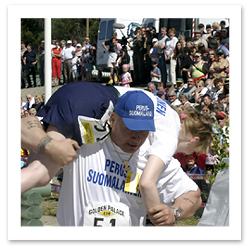 The world is full of festivals, contests, and competitions. Some are earnest, others completely wacky. Here are 12 that register high on our Outlandish Meter.

Wife-Carrying World Championships
When: July 7
Where: Sonkajärvi, in eastern Finland
As travel editors we encounter a fair amount of crazy stuff, but a contest to determine the best wife-carrier? For the record, this “discipline” dates back to the 19th century. Local legend has it that village villain Herkko Ronkainen used to swing his favorite girl onto his shoulders. This act has been duplicated by couples since 1992 — 47 couples have already signed up to compete in the 2007 games. Can’t go to Finland? There are similar events in Australia, Estonia, New Zealand, and North America. www.sonkajarvi.fi (photo, right)

International Cherry Pit Spitting Contest
When: July 7
Where: Eau Claire, in Southwest Michigan
How many times did your mother tell you not to play with your food? Well now you can show her who’s boss when you bring home the trophy for the 34th annual Cherry Pit Spitting Contest. Qualifying Rounds start at 10 a.m. and the championships start at 1 p.m. If you’re not into spitting, you can pick cherries, eat cherries, and celebrate all things cherry. www.treemendus-fruit.com/int.htm

World Mountain-Bike Bog Snorkeling Championships
When: July 7
Where: Llanwrtyd Wells, Wales
Using specially outfitted bikes, competitors wearing snorkels (you’re underwater after all) cycle two lengths of a 60-yard trench that’s been cut into the bog. You must bring your own snorkels, and wetsuits are advised. Fastest through the bog takes home the trophy. If you want to make it a weekend event, there’s a bog triathlon on Sunday. http://llanwrtyd-wells.powys.org.uk/

Milk Carton Derby
When: July 7
Where: Southwest Corner of Seattle’s Green Lake
More than 100 sea-faring vessels constructed of 50 half-gallon cartons take to the lake for this annual event. If you can’t get your sea legs, there are numerous activities on shore to entertain. There’s also the Canine Fashion Show. www.seafair.com

Talkeetna Moose Dropping Festival
When: July 14–15
Where: Talkeetna, Alaska
There are lots of events in this annual fundraiser, although no animals are dropped, despite the name. The festival does call for the handling, however, of some unpleasant animal byproducts. For instance, there’s the Moose Drop Dropping Raffle and the Moose Poop Toss Game. There’s also the Mountain Mother Contest on Sunday that highlights the strength and endurance of Alaskan Moms, who must compete in a variety of activities with a “baby” strapped to their backs. www.talkeetnahistoricalsociety.org/

World Toe-Wrestling Championships
When: July 22
Where: Derbyshire, England
Toe-puns abound at this annual event, which is held at the Bentley Bridge Inn. The search for the strongest and most dexterous toe started in 1976, but had to take a hiatus just a year later when a Canadian’s toes ruled the day. The festivities started back up in 1990 and have been going toe-to-toe ever since. Bad wrestling outfits are encouraged.

Central Maine Egg Festival
When: July 23–28
Where: Pittsfield, Maine
For 35 years this New England town has been celebrating the incredible, edible egg — brown eggs to be exact. This year’s theme is “Staying Egg-Alive.” There’s an early-bird breakfast, which uses the world’s largest frying pan, the “Egglympics,” a chicken barbecue, and a whole lot more egg-tastic fun. http://eggfest.craftah.com/

Great Texas Mosquito Festival
When: July 26–28
Where: Clute Municipal Park, Clute, Texas
In addition to the world’s largest mosquito — a 26 ft. Texas mosquito complete with a cowboy hat, boots, gigantic wings and a big stinger — there’s a mosquito-calling contest, a dodge-ball sting tournament, and a contest for the best-looking Mosquito legs. Who will be crowned this year’s Mr. or Ms. Mosquito Legs? You’ll just have to buzz on by to find out. Don’t forget your bug spray. http://mosquitofestival.com

Tug Fest
When: August 9–11
Where: LeClaire, Iowa and Port Byron, Illinois
For 20 years, the town of LeClaire has taken on its rival across the river, Port Byron, in the annual Tug Fest. A 2,400-foot rope weighing 680 pounds is stretched across the Mississippi River and teams on either side of the river tug away for bragging rights. This year the tug takes place on Saturday, August 11 at 1 p.m.. The contest also includes live music, rides, and foods. As it stands, the score is Iowa 10, Illinois 9. Who will rule the river this year? www.tugfest.com; www.tugfest.org

La Regate des Baignoires (International Regatta of Bathtubs)
When: Mid-August
Where: Dinant, Belgium
This one’s as wacky as they come. Participants build floats that must contain at least one bathtub in its construction. Last year the local butcher sponsored a float that had its riders wielding meat cleavers. Water fights usually ensue between the competitors and the spectators — consider yourself warned. 082/222–129.

Mobile-Phone Throwing World Championships
When: August 25
Where: Savonlinna, in eastern Finland
Official phones are provided for the contest, which has two categories: traditional style throwing, where phones are thrown over the shoulder (farthest distance gets the most points); and freestyle throwing, where contestants get points for creativity. The highest score wins. There will be no doping tests and old phones are recycled and the batteries properly disposed. Good to know. http://www.savonlinnafestivals.com/en_index.htm

La Tomatina (tomato throwing)
When: Every year on the last Wednesday of August
Where: Bunol, a tiny town outside Valencia, Spain
This extravaganza might just be the best stress relief you can get without a prescription. Though the festival’s origins are unknown (some say it mushroomed from a tomato thrown at a pedestrian), more than 20,000 visiting tomato-chuckers descend upon this modest town annually to literally paint it red with hundreds of thousands of thrown tomatoes. It’s the tomato version of a snowball fight, in all its bloody glory. www.latomatina.org