The World’s Most Romantic Hotels

Ask someone to name the most romantic hotels in the world and you’ll most likely get a list of the world’s most expensive ones — the George V in Paris, the Portobello in London, etc. It’s true that places like these know how to put on the Ritz, but being the most expensive hotel doesn’t mean you’re the most romantic. Indeed, romance is about more than Michelin-star chefs and remote-control shutters, as we learned when a group of Fodor’s editors and writers weighed in on this very subject. Read on. 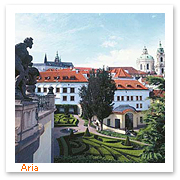 Prague is so romantic you could spend a night at the city’s YMCA and be pleased as punch. But for a true love fest, nothing beats the Aria, a music-themed boutique hotel in the Mala Strana district. It gives new meaning to the term “understated elegance.” The hotel’s €690 Valentine’s Day Package includes a two-night stay in a deluxe room, buffet breakfasts, dinner downstairs at the Coda restaurant, plus sparkling wine and strawberries upon arrival. —Susan MacCallum-Whitcomb

Gaspard de Besse, the French Robin Hood, came down from his stronghold in the Esterel hills above the Cote d’Azur for romantic trysts in Les Adrets de L’Esterel. L’ Auberge des Adrets, a 17th-century coaching inn, was probably the place he and his lover hid. Rooms are extravagant and eccentric — one even has a piano! —Ferne Arfin 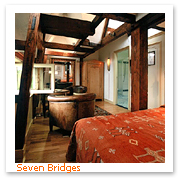 The Seven Bridges, in Amsterdam, is an historic house that has been converted into a lovely bed and breakfast (albeit with unbelievably steep stairs). The longtime inn-keepers, Gunther and Pierre, have learned to tread a fine line between hospitality and privacy, but you can count on them to fill the entryway with sweet-smelling fresh-cut flowers and to provide an enormous Dutch breakfast in your room overlooking one of Amsterdam’s most charming canals. —Will Shank

Perched 1,500 feet above the Bay of Salerno, in Ravello, the cloud-cushioned Villa Cimbrone has long been considered one of the world’s most romantic places. Built in the 1910s by Lord Grimthorpe, the Villa Cimbrone is now one of Italy’s dreamiest hotels. Countless wedding banquets are held in the achingly lovely gardens, which hang off a cliff over the bluest bay in the world. After the sun goes down — a spectacle as radiant as any Spielbergian special effect — you’ll find little nightlife to speak of, except moon-gazing. —Robert Fisher

A truly romantic place is Paraiso de la Bonito Resort & Spa, on the Caribbean Coast, just south of Cancun. Everything about it screams “couples,” from the sunken bathtubs, hammocks, daybeds, and plunge pools in the suites to the double-wide chaises by the pool. If you were alone at Paraiso, you’d miss your significant other acutely. —Laura Kidder 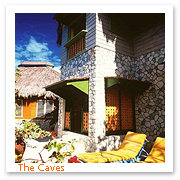 For a romantic getaway you really can’t beat The Caves in Negril, where the villas hang out over the cliffs and staffers fill one of several intimate caves on the property with candles and a dinner table for two. Add to the scene the blue water, the sultry Jamaican climate, and the thrill of jumping off the cliff into water and you’ve got a helluva sensory-heightening stay. —Elaine Glusac

If you’re looking for something really romantic, try Windmills Plantation, Salt Cay, Turks & Caicos Islands. Far from the madding crowds — Salt Cay has only about 100 full-time residents — you can enjoy the hospitality of experienced hoteliers and exquisite but unfussy meals with few other distractions except each other. If lounging or walking along a pristine beach hand-in-hand is your idea of a vacation, this is the ideal place to do it. —Doug Stallings 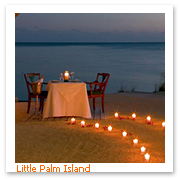 It’s hard to believe you’re in the L.A. Basin at the Hotel Bel-Air. Tucked into a wooded canyon, it’s surrounded by incredibly lush gardens complete with a lake. The hotel has private, quiet bungalows, some with wood-burning fireplaces, and there’s always a lovely tea basket waiting for you on arrival. You can arrange for special in-room massages, or nibble chilled fruit by the pool. But it’s the sense of being hidden away — wandering along the pathways, with vines and flowers everywhere — that I thought was the most romantic aspect. —Jennifer Paull

Torn between the fantasy of dragging your sweetie off to a deserted tropical island and a craving for creature comforts? You can have it all at Little Palm Island, a luxury resort in Florida’s Lower Keys. A spectacular white sand beach curves around a deep blue lagoon on this private island. Your oceanfront thatched-roof bungalow boasts the world’s most comfortable king-size bed and an outdoor shower and verandah with spectacular views. The ever-obliging staff light will candles, draw a mango-scented bath, and scamper away before you return from dinner. —Michelle Delio

There are few places more beautiful than La Mansion del Rio in San Antonio. Overlooking a quiet stretch of the River Walk, it just glows, inside and out. It’s hard to leave the rooms, which have Spanish tile floors, brick walls, and exposed-beam ceilings, but a nighttime dip in the secluded courtyard pool is a good motivator, as is the upscale regional cuisine at Las Canarias (where you can dine by candlelight alongside the River Walk). —Mike Nalepa 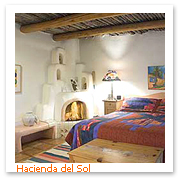 Hacienda del Sol, in Taos, gets my vote for most romantic. Most of the rooms have kiva fireplaces, Southwestern handcrafted furniture, and original art work. Best of all, the “backyards” of the rooms and the secluded outdoor hot tub have a view of Taos Mountain that is so idyllic it can evoke tears of joy from even the most cynical of travelers. —Paul Eisenberg

See these stories for other hotel recommendations for the romantic traveler:

Wish to wisk your special sweetie away for the weekend?
Our Forums posters know there’s nothing more romantic than a well-planned surprise trip: