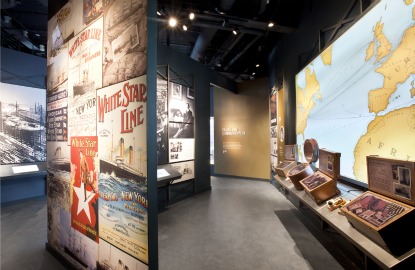 On March 31—one hundred years to the day on which construction of the RMS Titanic was completed in Belfast, in Northern Ireland—doors opened to the world’s largest Titanic exhibit, the "Titanic Belfast." The six-floor, nine-gallery museum showcases four hull-like structures standing as tall as the unsinkable ship herself, and takes visitors through the legendary liner’s history, from its launch through its tragic sinking, which ultimately led to the loss of some 1,500 lives.

Featuring high-tech audio and video equipment, high-definition projectors, live feeds to research centers, and even a simulated ride through Belfast’s turn-of-the-century shipyard, the exhibits immerse visitors in the lives of those who built, operated, and sailed upon the Titanic’s first and last voyage.

The galleries, designed by Event Communications (known for their work on the Victoria and Albert Museum, among other projects), begin with a look at the town of Belfast at the start of the 20th century, and then move through the Titanic’s construction and departure from Belfast to Southampton. From there, visitors step into an "avatar cave," a virtual 3-D environment where they can examine the ship’s various structural and luxury elements.

Visitors continue their voyage through to the ship’s departure from Southampton to New York City, to the collision with the iceberg, and to the ultimate sinking of the Titanic. The galleries conclude with the aftermath following the tragedy and a look into the discovery of the Titanic’s remains on the ocean floor.

For special events, the 1,000-person banquet hall features decor inspired by the elegant rooms of the original ship.

Tickets are $21 for adults, $11 for children, and are already sold out through April 16, 2012. For more information and to purchase advance tickets, visit www.titanicbelfast.com.

Thinking of a trip to Northern Ireland?

For up-to-the-minute hotel and restaurant recommendations, plus the best planning advice, check out our Northern Ireland Travel Guide.