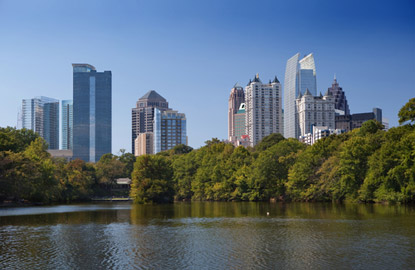 The 1.2 million square foot terminal, known as Concourse F, will house 12 gates (which, when connected to Concourse E, will provide 40 international gates for passengers) and separate floors for arrivals and departures, making for easier maneuvering inside the airport. Aesthetically, the terminal is designed to breathe—glass walls, curved ceilings, and large open spaces help mitigate the claustrophobia of long international flights.

With international passenger traffic up almost eight percent in 2011 over the previous year, and an FAA estimate that puts over 13 million annual international travelers passing through ATL by 2015, the city seems poised for a leap forward in tourism.

New restaurants like Gu’s Bistro (located in Doraville outside Atlanta), Heirloom Market BBQ, and One Eared Stag have made waves in the city’s food community, snagging Best Of awards in 2011 by Atlanta Magazine. Well-known food blogger Steve Plotnicki named two of Atlanta’s restaurants—Restaurant Eugene and Quinones Room at Bacchanalia—the best in America in his 2012 Opinionated About Dining survey.

Hotels are upgrading in the city as well. Mandarin Oriental recently took over and rebranded the Mansion Hotel, opening the Mandarin Oriental, Atlanta on that site earlier in May. Starwood Hotels will be operating a newly renovated Le Meridien (the ninth in the U.S.) in the next year and a half.

With a thriving range of cultural activities–from a new performance space in an old cotton gin factory to Atlanta’s very own bocce league to trendy nightclubs like Michael Gidewon’s Reign and Vanquish and restaurant/tequila bar Escorpion–some of those 10 or 13 million international travelers may be spending more than just a layover in A-town.

Thinking of a trip to Atlanta?

For up-to-the-minute hotel and restaurant recommendations, as well as the best planning advice, check out our Atlanta Travel Guide.