Most of the world’s major cities hold some sort of flea market, usually on weekends—if you happen to be in town for one, spending at least part of a nice day perusing flea market fare can be an altogether rewarding experience. After all, you’ll spend the day rubbing shoulders with local shoppers and vendors, and you can usually find truly unique souvenirs to bring home—which, more often than not, are a bargain, even if you haven’t quite mastered the art of haggling in a foreign language. Best of all, they’re typically free (or cheap) to get into. Herewith a rundown of our favorite flea markets around the globe. 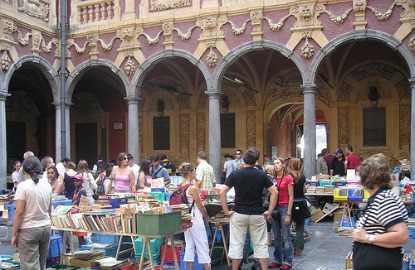 Chances are you’ve heard of Paris’s Marché aux Puces, but Lille’s annual Braderie de Lille is considerably more expansive. Each year during the first weekend in September (September 1–2 in 2012), the festive market stretches for more than 60 miles in this northern French town near the Belgian border, and receives between one and two million visitors, making it the largest flea market in Europe. Lille is easily reached by train from major European cities—catch the Eurostar from London or a TGV from Paris—and although the flea-inspired festival ends quite late on a Sunday evening, it can serve as a fun and easy day trip from either capital. 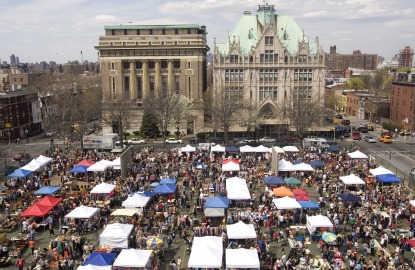 New York City’s hippest borough, Brooklyn has emerged in the world spotlight as a thriving hub for food, music, and art—all of which come together at the Brooklyn Flea, a thriving year-round market. During the winter, the Flea is held in a grand-old former bank, One Hanson, in Fort Greene. Next weekend (April 6–7), however, marks its return to the great outdoors, moving to large open-air spaces in Fort Greene on Saturdays and Williamsburg on Sundays, two tastemaker neighborhoods that are easily accessible from Manhattan. And although the Flea has great food (don’t miss the dips at K’ors D’oeuvres), the city’s most fervent foodies flock to its sister culinary market, Smorgasburg, which is held on Saturdays at the Williamsburg location. 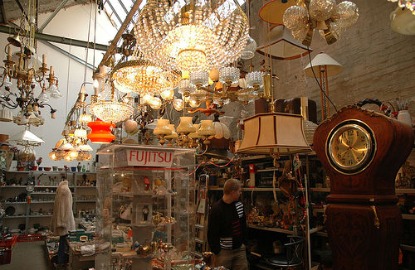 On any given weekend, Berlin is a flea-lover’s paradise, with a large handful of open-air markets unfolding throughout the city, including a couple near to what was formerly the Berlin Wall. Like the city itself, the selection at many of these markets is a quirky mix of old and new, with artifacts from the Cold War era on display next to trendier jewelry and designer wear. And, like most things in Berlin, prices are typically less expensive than you’d find in a city like Paris or London. If you’ve only got time for one market in the city, head to the Strasse des 17. Juni for its mix of bric-a-brac, funky mementos, and objets d’art. 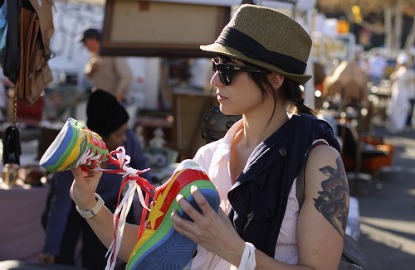 Hunt for California Style in a Trio of L.A. Fleas

Hot spot L.A. has a rotating schedule of Sunday flea markets, each with its own character and clientele. The biggest and most comprehensive is the Rose Bowl Flea, held on the second Sunday of every month. With some 2,500 vendors, it’s a great source for mid-century furniture and smaller home decor items. Or, try the smaller Santa Monica Airport Outdoor Antique and Collectible Market, held on the first and fourth Sunday of the month, another standout; its proximity to LAX makes it a perfect pit stop if you’re heading home on a Sunday flight. There’s also a weekly Sunday flea market in the parking lot of Fairfax High School (at the corner of Fairfax and Melrose) that’s a fun post-brunch stop (although it has its own food area) for eyeing jewelry, posters, and even the occasional celebrity. 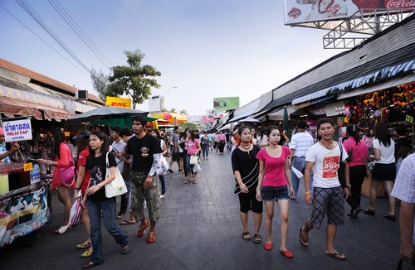 The weekend flea markets in Bangkok are boisterous and sweaty, but are filled with such extra-rich local flavor that it’s well worth the long plane ride to get there. The city’s most famous market is Chatuchak, which has plenty of typical Thai souvenirs, but also plenty of tourists. Though still fun to visit, for a bit more authenticity and some really unique finds, we recommend heading to the nearby Rot Fai Market on a Saturday or Sunday night. It’s the place to find kitschy goodies from the ’50s, ’60s, and ’70s—maybe not the first thing you’d expect to find in Bangkok, but gems like collectible vintage jeans make it lots of fun to peruse.