News Apeksha Bhateja India Is Experiencing a Brutal Heatwave. Here's Why It Matters to You
Home  >  News   >   Winter Destinations: Nevis 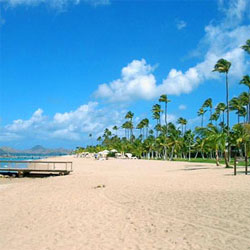 Its name means “The Snows,” thanks to Christopher Columbus, who must have been very tired when he decided that this tropical paradise near the top of the Lesser Antilles should be named after the island’s snow-capped peak. The constant cloud cover that confused Columbus still circles around Mt. Nevis, but just underneath the 3,232-foot volcano are blue skies, blazing white beaches, and outrageously blue water that stays warm year round. You can expect temperatures in the low 80s during January and February.

Day One: Charlestown
Head into Charlestown, the main town on the island. Meander along Main Street and check out the tiny Museum of Nevis History by the waterfront. The collection here documents the time when Nevis’ sugar trade made the island rich. The museum is housed in a Georgian-style abode that is famous for being the birthplace of Alexander Hamilton, who was born here in 1757. Next, stop by the Cotton Ginnery Complex, also near the water’s edge, where you can purchase local crafts and artwork (make sure to get a bottle of local hot pepper sauce and a jar of Nevis honey). Later, visit the Nevis Philatelic Bureau, at the Post Office on Market Street, and ogle their catalogue of stamps. You’ll be amazed at these miniature works of art.

Have lunch in the Ginnery’s restaurant (behind the town pier, in the Ginnery Mall) and relax by the waterfall in the cool, green garden. The menu includes sandwiches, conch fritters, and homemade pies. Then spend the afternoon on Pinney’s Beach (photo above), in front of the Four Seasons. Around sunset, face the ocean, turn to your left and take a short walk over to Sunshine’s, a picturesque wreck of a beach bar that is home to friendly dogs, nice people, and the shockingly potent, rum-drenched “Killer Bee” beverage.

Day Two: Tour the Island
Tour the island. If you’re comfortable driving on the left side of the road, rent a car ($15-$20 per day). Or arrange for a taxi cab tour, which will cost about $70 for three hours. On the 36-mile round trip you’ll see ruins of old forts and sugar mills, quiet neighborhoods with grazing sheep and goats (if they want to cross the road, they have the right of way), perhaps even a monkey or two. While on the eastern side of Nevis, have lunch local style at PEMO’S (near Nesbit). If you rent a car, be advised that you must obtain a permit from the traffic department, which costs EC $62 (US $23) and is valid for a year. Car-rental companies will handle this for you.

In the afternoon, head back to the beach or visit the Botanical Gardens, seven acres of beautifully landscaped gardens with great collections of palms, orchids, vines, and cacti. There’s even a totally incongruous (but nifty) miniature Mayan temple. Wrap up the afternoon at the garden’s West Indian Tea House. 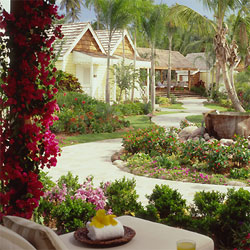 Day Three: Off to St. Kitts
Take the ferry to Nevis’ sister island, St. Kitts. Basseterre, the capital city, may look a little worse for wear, but many of the buildings house unique shops and art galleries. A good place to start is the Circus, right in the center of town and modeled after London’s Piccadilly Circus. Duty-free shops and crafts galleries crowd the streets and courtyards surrounding the Circus.

Pause to admire the gardens that grace the site of the former slave market at Independence Square (off Bank St.). A few blocks west of the Post Office, along the Bay Road and near the ferry dock on the waterfront, is the Public Market, where locals sell fresh food and crafts. Do sample the local beverage, Ting, a bracing grapefruit soda. Later, throw back a Royal Estra Stout, or a glass of mauby, a potent brew made from tree bark. There are lots of good restaurants around the Circus, among them the Ballahoo and the Grill.

Where to Eat: Miss June Mestier entertains 15 to 20 people in her home two or three times a week for dinner. Guests sip aperitifs in the living room and then move on to the dining room to sample traditional dishes from Trinidad, New Orleans, India, and whatever else happened to catch Miss June’s fancy that day (she’ll explain what she cooked in detail over dinner). Reservations are a must — the sooner the better. (The all-inclusive price of $65 includes drinks.)

Where to Stay: The Four Seasons Resort Nevis has a prime location right on Pinney’s Beach. The resort has just completed a $10 million renovation project and now boasts a new beachfront restaurant and pool. Rooms have an outdoor patio or veranda. Standard rates are scary — $1,825 – $925 per night — but there are excellent seasonal specials.