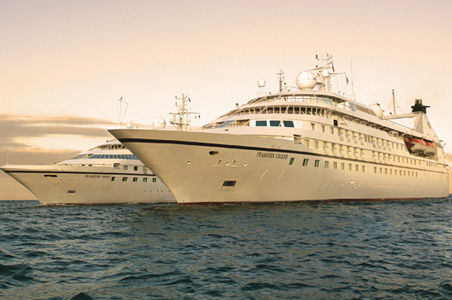 This has been an important month for Windstar Cruises, a leader in small ship cruising. First they announced their return to French Polynesia in 2014 and now even bigger news is released. Windstar is doubling the size of its fleet with the purchase of three Seabourn yachts.

The February 15 purchase includes a trio of 208-passenger, all-suite yachts: Seabourn Pride, Seabourn Legend, and Seabourn Spirit. The “sisters” were always favorites of Seabourn loyalists and Windstar fans are expected to embrace the intimate vessels even though they are more accustomed to Windstar’s Spirit, Star, and Surf, which are masted sailing ships.

Seabourn will transfer Seabourn Pride to Windstar in the Mediterranean in April 2014. The ship will under go a renovation and rebranding before setting sail under a new name in May. Voyages for this ship will go on sale in May of 2013. Windstar will take possession of Seabourn Legend in April 2015 and Seabourn Spirit in May 2015, both of which are scheduled to start cruising under Windstar’s name in May 2015 following their own dry-dock refurbishments.

Windstar’s chief executive officer, Hans Birkholz, said at the time of the acquisition that, “Windstar is proud of its heritage in sailing, but what our guests are most enthusiastic about is our intimate, yacht style of cruising. This style is the core of our brand experience and the new ships are a perfect fit to build on that foundation.”

The new ships open up new itineraries around the world for Windstar, including Asia and South America. The cruise line will continue to focus on visiting small harbors and secluded coves around the globe.

For Seabourn’s part, the sale of its smallest ships presents a new opportunity and the line will now focus on augmenting its fleet of larger vessels that currently includes the 450-passenger Seabourn Odyssey, Seabourn Sojourn, and Seabourn Quest. According to Richard Meadows, president of the cruise line, “Seabourn is already in discussion with shipbuilders and an order is likely to be announced within the current fiscal year. The new ship will allow Seabourn to maintain much of its current guest capacity.” The fourth ship will be similar in design and capacity to Odyssey, Sojourn, and Quest.

Seabourn is assuring passengers currently booked on Pride, Spirit, and Legend before the transition that the company is still fully committed to delivering the highest level of service. The cruise experience aboard the sisters will remain the same throughout Seabourn’s management of the trio.

The growth of Windstar’s fleet and Seabourn’s new ship build are both win-win for travelers whoâ€™ll have expanded small-ship cruise options come spring 2014.