News Tina Charisma 'Regenerative Travel' Is the New Buzz Phrase, but What Does It Mean?
Home  >  News   >   Windstar Cruises to Sail Southeast Asian and Middle East 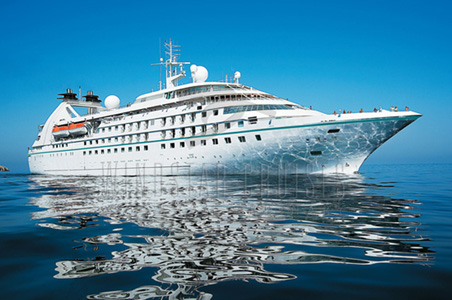 Fans of small ship voyages, look out for Southeast Asia and the Middle East on your travel horizon. In 2014 and 2015, Windstar Cruises will expand its fleet from three motor-sail ships to include three 212-passenger yachts. The line is buying the yachts from Seabourn in order to execute this expansion. Star Pride (formerly Seabourn Pride) joins Windstar in May 2014, while Seabourn Legend and Spirit will begin sailing under Windstar’s flag in May 2015. This expansion gives Windstar the ability to finally forge new paths around the globe: starting in Southeast Asia and Arabia.

This is fantastic news for travelers who wish to sail aboard an elegant all-suite vessel without the formality of other cruise lines as there are no formal nights for Windstar. Windstar passengers tend to be younger than the industry average and are more active. For those looking to experience a destination in-depth and enjoy their days at sea, Windstar might be the perfect fit. The new Star Pride will sail four unique Southeast Asia & Middle East itineraries starting October 30, 2014.

This 10-night round-trip itinerary from Singapore is perfect for professionals who can’t take more than two weeks off at a time. You’ll explore some of the most fascinating ports in the region, including Penang, Langkawi, Pulau Pangkor, Kuala Lumpur, and Malacca in Malaysia and Thailand’s islands of Phuket and Ko Yao Noi. Departures: December 2 and 12, 2014 and March 20 and 30, 2015. Per passenger cruise fares start at $3,999.

This new 14-night journey from Singapore to Hong Kong focuses on Vietnam in-depth and includes five sea days. Travelers will overnight in Ho Chi Minh City, head to Nha Trang and Qui Nhon before the next overnight port of call at Da Nang. Hanoi and famed Halong Bay follow, before arriving in Hong Kong. UNESCO World Heritage sites are the highlight of this tour. Departures: December 22, 2014 and March 6, 2015. Per passenger cruise fares start at $5,199.

Pearls of the Indian Ocean

The islands sprinkled across the Andaman Sea are some of the most beautiful places on earth, and Star Pride will take you to this region on the 15-night Dubai to Singapore voyage. Nine sea days are punctuated with vibrant ports of call like Mumbai, Mangalore, and Cochin in India; Phuket, Thailand; and Penang, Malaysia. Departures: November 17, 2014 and April 9, 2015. Per passenger cruise fares start at $4,599.

If you’re looking for a longer cruise vacation, the 18-night Wonders of Arabia itinerary may fit the bill. Star Pride embarks from Athens and ends up in Dubai after transiting the Suez Canal and visiting Aqaba, Jordan; Hurghada, Sharm El Sheikh, and Luxor (an overnight) in Egypt as well as Oman’s Salalah and Khasab. Departures: October 30, 2014 and April 24, 2015. Per passenger cruise fares start at $5,799.

While Star Pride may be new to the Windstar fleet, she’ll soon feel familiar to returning Windstar guests. Star Pride will host the line’s famous Sail Away party, have the barbecue gala on deck, and will offer an Open Bridge policy just like her sailing ship cousins, Wind Surf, Wind Star, and Wind Spirit.