Pan Am Brings Travel Glamour Back to Prime Time

These days, with cancelled flights, long layovers, and stripping down for security, the reality of airline travel is far from dazzling. It’s hard to believe there was a time that dressing up to fly was de rigueur. And becoming a flight attendant was a glamorous choice for adventurous women looking to see the world. That very premise is behind ABC’s new Pan Am series, starring Christina Ricci, premiering Sunday. 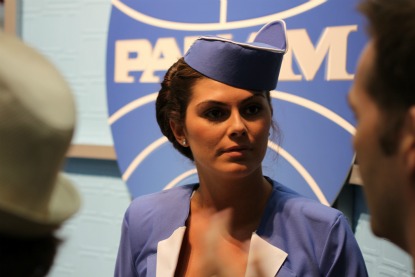 But even in the real world, airlines such as JetBlue are using fashion-forward dress and smartly designed extras as a marketing tool, reasoning that those in-flight details can make a difference on their bottom line. Other have followed suit, including Virgin, United, and Delta.

Just as the fashion industry has taken to the skies, airports have wizened up to the value of having high end retailers. Duty free has become a shopper’s dream, and gone are the days when all you might grab is a pricey bottle of Scotch. Now, a quick pass through the departure hall can transform your look from tired traveler to pre-flight fashionista, with a smattering of luxury brand boutiques to choose from, such as Burberry at Heathrow and DKNY at JFK. And airports spas like XpresSpa and d_parture spa have become as ubiquitous as bars and newsstands, ready to massage tired shoulders and repair broken nails from toting luggage.

Even experiences once reserved for the elite have been made available to those accustomed to economy. American Airlines recently expanded its $200 per couple V.I.P treatment to 11 airports, United has several perks and upgrades for less than $100, and Priority Pass, a company that sells membership for unlimited first and business class lounge access worldwide, can be yours for about $400 a year. And chartering a private jet—a luxury only celebs and the super wealthy could enjoy—is more within reach than ever. One Sky realized there was money to be made on pilots’ empty return trips, and began offering them at a discount of up to 50 percent.

With glamour continuing her ascent, here’s to hoping she takes flight for good.