Will and Kate Tour Asia Pacific 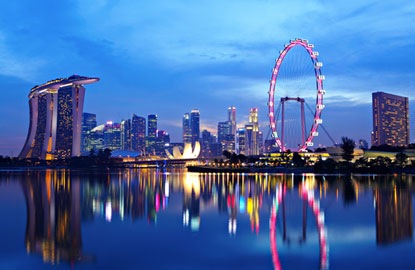 How do you celebrate your grandmother’s sixtieth year as the figurehead of the United Kingdom (and Canada)? You go to island hopping, of course! The Duke and Duchess of Cambridge (that’s Will and Kate to those of us who know them well), arrived in Singapore yesterday for the start of a nine day tour of Asia Pacific for the Queen’s Diamond Jubilee. After Singapore, trips to Malaysia, the Solomon Islands, and Tuvalu are on the itinerary before they return on the 19th to the utter anonymity they so enjoy in London.

On Tuesday, the royals visited the Singapore Botanic Gardens, where an orchid has been named after them. They also viewed an orchid named after William’s late mother, Princess Diana. That night it was time to rub elbows with the president of Singapore and other officials, and a speech was delivered on behalf of the lady of the hour.

Yesterday the couple toured two gardens, planted a tree, unveiled an aircraft engine at the Rolls Royce factory, attended a cultural demonstration, met with local residents, and stopped by a school for children with special needs, and that was all before dinner.

It’s not all glittering ballrooms and charmed I’m-sure‘s, though. Over the course of the week, Their Royal Highnesses will be high-tailing it from one cultural or social event to another across the islands as part of a packed itinerary, including a visit to a hospice in downtown Kuala Lumpur, a jungle research facility in Malaysia’s Danum Valley, and other important sites. At Honiara in the Solomon Islands, William will appear at a leadership conference for young people, followed by a visit to a World War II memorial. On Tuvalu it will be a stop at a school and a reproduction of a traditional village. Many a speech, or "short remarks," will be given and many a hand shook. Apparently the "royal treatment" translates to a lot of driving, endless luncheons, and very few naps.