News Larry Bleiberg You Can Finally Look Inside This Stunning D.C. Landmark. But Only for Another 25 Days
Home  >  News   >   Where to Spend Thanksgiving This Year

Where to Spend Thanksgiving This Year

Thanksgiving is the official start to the holiday season. It brings families together for various traditions from watching the Macy’s Thanksgiving Day Parade bright and early to post-turkey-feast coma-style-napping. But late November is also one of the best times of year to visit somewhere new—to experience the fall foliage in Philly’s Fairmount Park, eat truly farm-to-table meals at Tennessee’s Blackberry Farm, watch the Thanksgiving Day Parade live and close up in NYC, and create new traditions as you go. Here are our top picks for where to go for Thanksgiving this year. 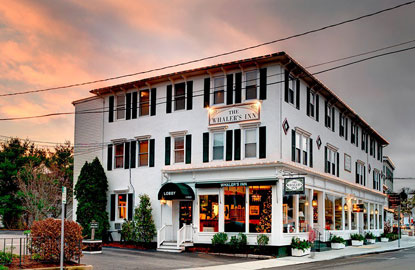 Charming Mystic, a pearl on the Connecticut coast near the Rhode Island border, might be best known for pizza, but cider is its real homegrown industry. The town is home to B.F. Clyde’s, the oldest steam-powered mill in the country. Open to the public from September through December, the mill produces hard (and soft) ciders, wines, jellies, jams, baked goods, and other comestibles.

Where to Stay: Just across the Bascule Drawbridge from downtown Mystic, the picturesque Whaler’s Inn offers tasteful rooms in a collection of renovated buildings. The best are in the sage-green Hoxie House, where the rooms boast whirlpool tubs, fireplaces, and views of the Mystic River.

Where to Eat: Butternut bisque, candied carrots, brown sugar-glazed ham, and (of course) turkey appear on the Thanksgiving Day buffet at Latitudes 41, a stylish water-view restaurant in Mystic Seaport.

Insider Tip: Schedule visits to B.F. Clyde’s on Saturdays and Sundays; the family’s sixth generation hosts cider-making demonstrations at 11 am and 1 pm. 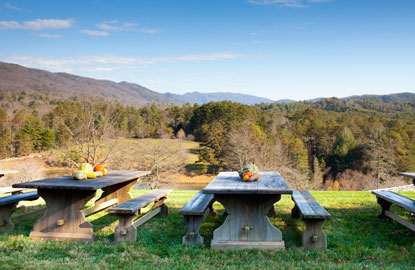 Framed by the misty Great Smoky Mountains, it’s hard to paint a more idyllic picture than Walland, Tennessee, a small town on the eastern side of the state whose claim to fame is the luxurious American resort, Blackberry Farm. Situated on 4200 softly rolling acres, the hotel, spa, and working farm makes an easy, ideal Thanksgiving escape.

Where to Stay: If renting one of the “cottages” on Blackberry’s grounds is out of the budget, consider the Estate Rooms. Furnished with four-posted beds and fireplaces, these quarters are just as handsome. Think of the savings as more to spend on Blackberry’s plethora of activities, everything from fly fishing in the estate’s ponds and streams to a tour of the onsite brewery.

Where to Eat: It doesn’t get more local than the cooking at The Barn, where chef Joseph Lenn serves up sophisticated “Foothills Cuisine” (scallops with pumpkin butter and preserved collards, for example) inspired by the bounty of the Farm and the Tennessee region. 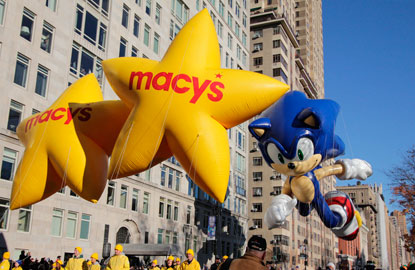 This year marks the 86th for the Macy’s Thanksgiving Day Parade, an event as iconic New York as the New Year’s Eve ball drop. The procession of Snoopy, Kermit, and company rides a new route in 2012, from 77th and Central Park West and down Sixth Avenue to Macy’s Herald Square.

Where to Stay: The cloud-piercing Hilton is right in the heart of the parade route at 54th and Sixth. Ask for a float-facing room between the seventh and 17th floors—and expect to pay for the fantastic, unobstructed views.

Where to Eat: The bird’s the word at the NoMad, the buzzy restaurant in the hotel of the same name, but it’s not turkey New Yorker’s are talking about, but chicken. The secret? Chef Daniel Humm, of the tony Eleven Madison Park, pipes a blend of foie gras, black truffles, and brioche breadcrumbs beneath the skin of his Amish bird.

Insider Tip: Consider one of the Thanksgiving Day Parade packages on NYCVP; the “VIP View” includes access to a private outdoor viewing area on Sixth Avenue. 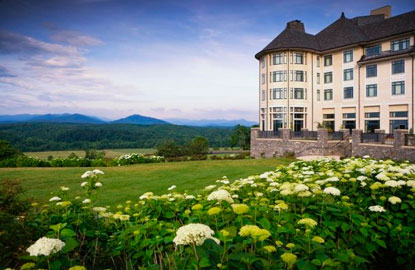 The holidays come early in Asheville, a festive tone set by the Vanderbilt family’s famed Biltmore Estate. Nestled in North Caroline’s Blue Ridge Mountains (stunningly amber and apple-red this time of year), the 250-room chateau decks the halls on the ninth of November, the first of the Candlelight Christmas Evenings that run through season.

Where to Stay: Though the vibe is more Christmas Wonderland than Thanksgiving, the historic luxury of Inn at Biltmore Estate is hard to resist. For something a little quirkier, the Grand Bohemian takes its design cues from a European hunting lodge with giant fireplaces and stag antler chandelier.

Where to Eat: For non-Thanksgiving eats, the Admiral in West Asheville is the place on food pilgrims’ lips. Chef Elliott Moss’s daily changing menu might include buttermilk-braised smoked short ribs one night, vadouvan-scented sweet potato bisque another.

Insider Tip: In need of a proper Thanksgiving repast while in Asheville? Just outside town, the quaint Waverly Inn throws in a complimentary turkey feast with all the trimmings for guests staying three consecutive nights over the holiday. 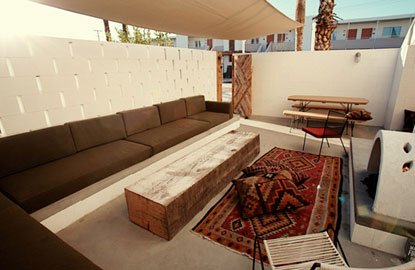 Where to Stay: You don’t have to be a guest of the Ace to partake in the Black Sheep events, but it certainly helps when it’s time to stumble home. Of the ten room styles in this smartly renovated midcentury-modern motel, the king chambers with fireplace patio will definitely land you some extra pie.

Where to Eat: Burgers at Tyler’s are de rigueur among Palm Springs foodies. The 16-year-old cafe is younger than its digs, the town’s old Greyhound bus depot which was built in 1936, but the cheeseburgers are no less iconic. 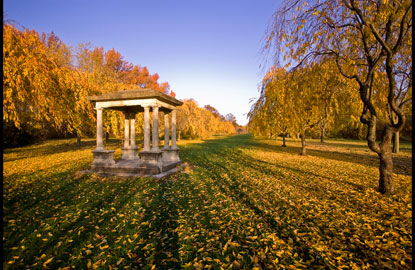 In Philly, foliage hounds get a real bang for their leaf-loving buck without having to venture far from the city. Fairmount Park, the largest landscaped city park in the world, boasts 4,100 acres of crimson, green, and gold crisscrossed by streams, gorges, and waterfalls.

Where to Stay: For exploring the City of Brotherly Love’s enormous green-space, there’s no more convenient—or luxurious—base camp than the Four Seasons. The sophisticated hotel sits on the Benjamin Franklin Parkway (also home to the newly relocated Barnes Foundation), which is modeled on Paris’s Champs Elysees and connects right to the base of Fairmount Park.

Where to Eat: With its citrus-stuffed dourade for two, scrambled eggs with urchin, and toasts with toppings like Maryland crab and charred spinach and leeks grilled over Japanese charcoal, Vernick Food & Drink, from Jean-Georges veteran Gregory Vernick, is Philly’s best new eatery.

Insider Tip: Don’t let the ominous name scare you away. Forbidden Drive, which hugs the Wissahickon Creek, is one of Fairmount Park’s loveliest trails. 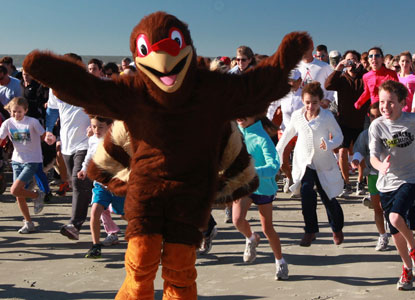 Picturesque, exclusive, and hemmed by miles of wild beach, Kiawah Island is to the Carolina Lowcountry what Newport is to New England. But on this narrow island just 40 minutes from Charleston, the old-money vibe is tempered by genuine Southern charm, both of which are in full regalia during the Kiawah Golf Resort’s annual Thanksgiving weekend.

Where to Stay: Don’t own a mansion on island? Don’t expect to get past the gated entry, unless you booked one of the handsomely appointed (four-poster beds, powder rooms) sea green-and-cream suites at the Sanctuary, the Kiawah Island Golf Resort’s genteel hotel. Events run all through Thanksgiving week, from a classic Lowcountry oyster roast to Native American lectures to the “Turkey Trot” on the beach on Thanksgiving morning. 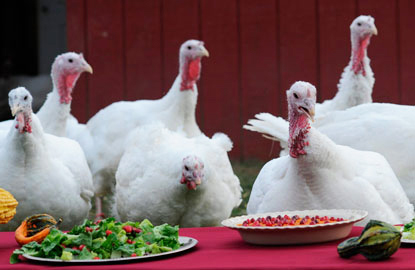 People are usually trying to get out of LA rather than into it during Thanksgiving, but Farm Sanctuary’s Animal Acres, a pastoral, 26-acre shelter for over 100 blissful beasts 45 minutes from Hollywood, offers a compelling reason for Angelenos (especially vegan and vegetarian ones) to stay in town. Two weeks before the actual holiday, the retreat’s Celebration for the Turkeys, in which the birds are the guests rather than the dinner. Presentations, tours, and a vegan Thanksgiving feast is all included in the $75 ticket.

Where to Stay: Cool, tranquil tones of concrete, amber, and brown envelop guests at the Andaz West Hollywood, a necessary measure to combat the hotel’s see-and-be-seen scene, in full force on the stunning sundeck tucked in the Hollywood Hills.

Where to Eat: Baco Mercat, one of 2012’s best new restaurants in the country according to Bon Appetit, specializes in bäcos, a pita/flatbread hybrid invented by chef/owner Josef Centeno and stuffed with chicken escabeche, oxtail hash, or for vegetarians, fava fritters with feta and Poblano.

Insider Tip: Really want to show turkeys some love? Farm Sanctuary gives you the option to sponsor one for $15 a month.