Where to Drink Wine at National Parks

Not to knock a flask of chilled water, but what’s really refreshing to some after a long hike is a glass of wine. Perhaps Domaine de la Romanée-Conti—or a New World Sauvignon Blanc or Chenin Blanc? Some national parks across North America offer just that, from Washington State’s forested peninsula to Colorado’s Rocky Mountains. Just be prepared to peruse the offerings: choosing between Chardonnay and Tempranillo may be as weighty a decision as what trailhead to take. 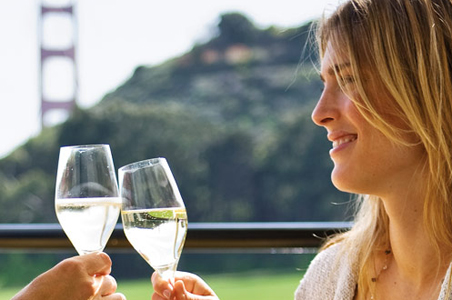 What: Cavallo Point: The Lodge at the Golden Gate

Details: As one of the country’s best example of an urban national park, Cavallo Point—a 74-room luxury lodge tucked into Golden Gate National Recreation Area since 2008—also has the advantage of being within an hour’s drive of wine country. To pair with locally caught and sourced seafood, meats, and vegetables at Murray Circle Restaurant, the 133-page wine list features 2,000 selections, including 30 wines by the glass, to help you design a flight. Lesser-known but exquisite California producers (like Chateau Boswell and Bink Wines) mingle with big-name wines from around the globe (like Moet & Chandon) on the by-the-glass list. Several dozen selections from France’s Domaine de la Romanée-Conti are among the well-heeled offerings.

Insider’s Tip: Time your visit around the Summer Barbecue Series: the next events are Aug. 18 and Sept. 2 where, from noon to 6 p.m., Lonesome Locomotive performs on the Callippe Terrace and house wines are paired with made-to-order BBQ. 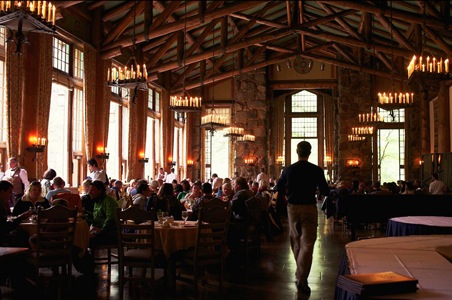 Details: Not only is the décor at Ahwahnee Dining Room breathtaking, with floor-to-ceiling windows and sugar-pine trestles, so is the wine list. After a day exploring the park this is where you come to be pampered, with china set on the table and chandeliers overhead. Executive chef Percy Whatley draws on mostly organic, California-grown produce, meats, fish, and other ingredients. A small-plates menu includes grilled petite lamb chops with lavender fleur de sol and pomegranate molasses, while a seasonal vegetable terrine and free-range rotisserie chicken round out the entrees. Twenty-seven wines—all but two are from California—are poured by the glass. Also on the 15-page wine list are six varieties of French Champagne and literally hundreds of celebrated California wines, including ones from Stag’s Leap Wine Cellars, Joseph Phelps, Merry Edwards, Zaca Mesa, Chateau Montelena, and Dutton-Goldfield.

Insider’s Tip: Seasoned park visitors know that the Sunday brunch is worth getting out of bed early for. Just make sure you change out of your hiking shorts and sandals. And order a glass of sparkling wine. 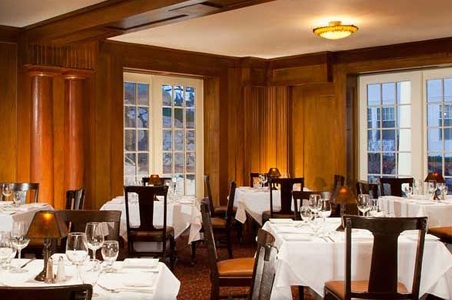 Details: Tucked into the century-old Stanley Hotel—just outside of the park, also in Estes Park—you can easily pair locally derived dishes with wine. (For example, Colorado striped bass; a board of local charcuterie and Jumpin’ Goat Good goat cheese; or Colorado meatloaf with organic elk, buffalo, and Kurobuta pork.) Twenty-six wines are poured by the glass, from a crisp Spanish Albarino to a luscious Petite Verdot hailing from a Colorado winery (Infinite Monkey Theorum). Bubbles post-hike aren’t a problem thanks to 26 selections, including Tattinger and Veuve Clicquot (both from France). Wines on the 10-page wine list are sorted by varietal but also sommelier-designed categories, such as "Intriguing Reds."

Insider’s Tip: You don’t have to wait for this restaurant to open for dinner. Cascades Restaurant & Lounge is open for lunch too. If you’re passing through en route to the park, why not drop by for a light, energy-filled lunch (such as kale salad with locatelli cheese, hazelnuts, golden raisins, and lemon vinaigrette) to help power your first day of hiking, paired with a glass of wine? 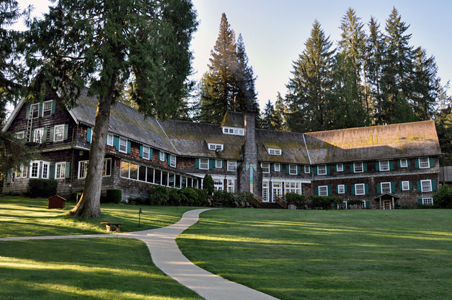 Details: Inside this lodge dating back to the 1920s is Roosevelt Dining Room. Its name arrived after former President Franklin D. Roosevelt ate lunch in this space back in 1937. Many locally derived small plates are on the menu, such as the local cheese tray (includes Cedarbrook lavender honeycomb) and Olympia Grown wild-mushroom ragout, plus Lake Quinault.

Naturally, most of the wines on the several-dozen-strong list hail from Washington State wine regions like Woodinville, Walla Walla, Columbia Valley and Yakima Valley although there are a few from Oregon’s Willamette Valley and Northern California.

Insider’s Tip: This year, the park celebrates its 75th anniversary. As part of a series of events there is a murder-mystery wine-pairing dinner package (starting at $299 per couple including accommodations, dinner, breakfast and wines) on Oct. 25 and Oct. 26.