News Robin Catalano Horses Run Wild on This Puerto Rican Island⁠—but for How Much Longer?
NewsWhere to See Wild Animals in Vegas

Where to See Wild Animals in Vegas 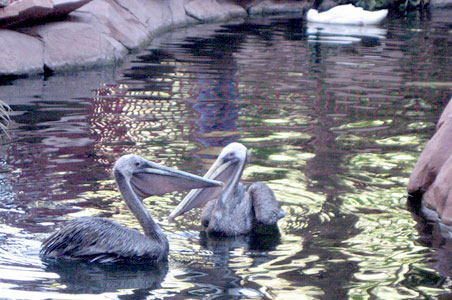 Bugsy and Virginia made their comeback at the Flamingo Las Vegas recently. Now the duo, an homage to the resort’s original owner Benjamin "Bugsy" Siegel and his girlfriend Virginia Hill, live in the Wildlife Habitat.

The recently rehabilitated brown pelicans were rescued by the Pacific Wildlife Project and the Flamingo adopted the birds, one male and one female. The pair was rendered flightless after injuries sustained from being entangled by fishing lines. To make room for the pair, the Wildlife Habitat spiffed up the place, repainting the island and installing a dock where they can perch.

This free attraction is open 24 hours a day with two presentations daily at 8:30 am and 2 pm. 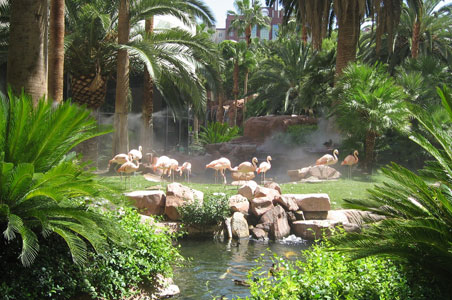 More Wild Animals on the Strip

Head over to the V Theater at the Miracle Mile Shops at Planet Hollywood Resort for the Popovich Comedy Pet Theater. Here, 15 cats, 10 dogs, a swan, duck, and parrots perform for audiences Thursday through Tuesday at 4 pm. Dogs jump ropes, cats push strollers, and all get involved in skits and stunts such as a doggie fire brigade rescuing cats.

At Siegfried & Roy’s Secret Garden and Dolphin Habitat at the Mirage, guests can see pools with bottle nose dolphins complete with an underwater viewing area. Just past the dolphins find the Secret Garden enclosure, where you will see Royal White Tigers, white lions, panthers, and leopards. The secret garden and habitat is open daily from 10 am to 6:30 pm.

Watch out. Mandalay Bay’s animals can scare the heck out of you. The Shark Reef aquarium features aquatic animals and fish from the world’s tropical waters. See sharks of all kinds, along with sawfish, giant rays, endangered green sea turtles, piranha, jellies, and the rare golden crocodile. In all, there are more than 2,000 animals in 1.6 million gallons of water. The aquarium is open daily from 10 am to 10 pm. Those who don’t want to pay for admittance can see turtles and small sharks on display in a smaller free aquarium by Mandalay Bays’s check in desk.

Mermaids swim with stingrays and sharks, as well as 4,000 tropical fish in the 117,000-gallon reef aquarium at the Silverton, just four miles south of the Strip. Feeding shows are run daily at daily at 1:30 pm and 4:30 pm. A marine biologist inside the tank will answer questions posed by visitors. Mermaid swims are scheduled Thursday from 2:15 to 8:45 pm, Friday and Saturday from 2:15 to 9:45 pm, and Sunday from 11:30 am to 6:45 pm. Also at the Silvern, the Bass Pro Shop features an 18,000-gallon water feature simulating Red Rock Canyon’s rock formations is filled with live Koi. Smaller fresh water tanks inside feature trout, channel catfish, carp, and bass and include a flowing canyon river featuring ducks, turtles, bluegills, and sturgeon.