News Apeksha Bhateja What Are the Chances You'll Get Monkeypox at a Hotel?
NewsBeyond Marrakech: Perfect Morocco Itinerary

When you think of Morocco, you probably think of Marrakech—the chaotic yet exhilarating souks; the snake-charmers and tempting foods at the Djemaa El Fna square; the riad hotels in 18th- or 19th-century houses with their lovely inner courtyards and calm from Marrakech’s frenetic pace. But outside the admittedly fascinating (and sometimes overwhelming) urban areas, Morocco has a varied landscape that ranges from windswept beaches to unspoiled desert to craggy mountain ranges and impressive gorges—and it’s possible to get a taste of all of these areas in one go, with just a little advance planning. You’ll need at least 10 days to complete the itinerary—and ideally longer if you want a more relaxed pace. Summers are high season in Morocco, with ideal weather on the coasts and in the Atlas Mountains, but be prepared for the cities and desert to be excruciatingly hot during the day. 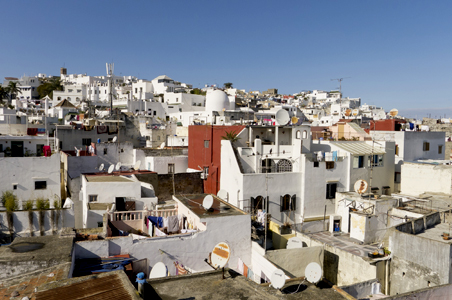 Start in the north of Morocco, alongside the Atlantic Coast, in the somewhat-gritty port city of Tangier. The one-time home of American expat authors Paul Bowles and William Burroughs, Tangier was long known for decadent behavior. Though it’s calmed a bit since then, it’s a heady mix of crumbling art deco buildings and scruffy coastline. Try a Moroccan mint tea at Café Baba before strolling along the waterfront and soaking up the atmosphere—you’ll either love it or hate it, but it certainly won’t be boring.

On the Side: Rent a car or take a bus an hour and a half southeast to the town of Chefchaouen, whose surreal blue-tinged buildings have captivated many photographers. 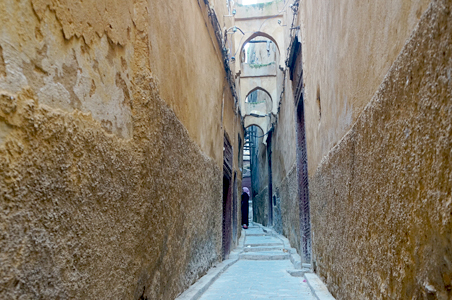 One of the best-preserved medieval cities in the world, Fez‘s old town is a labyrinth of streets lined with markets selling everything from dried fruit to handmade shoes to silver teapots. Practice your bargaining skills before you go. But the coolest thing about Fez may be that hidden amongst its ancient streets you’ll find modern eateries like Restaurant Numero 7, where the French-trained staff will treat you to such delights as pigeon consommé and foie gras. Spend the night in their adjoining hotel, Riad Numero 9, for even more modern touches. Ryad Alya is another lovely choice for an intimate, charming hotel in the middle of the medina. Make sure the hotel sends someone to pick you up upon arrival or you could get lost.

Getting There: Take the easy five hour train ride from Tangier to Fes (where, if you’re lucky, you’ll be offered fresh fruit by a friendly Moroccan cabin mate).

On the Side: The ancient Roman settlement of Volubilis boasts well-preserved arches, baths, and mosaics from the 2nd and 3rd century AD in the middle of the countryside; rent a car or hire a driver for a day to get there. It’s worth splurging on a guide at the entrance to learn more about this fascinating UNESCO World Heritage Site—what’s thought to be the most remote outpost of the Roman Empire. 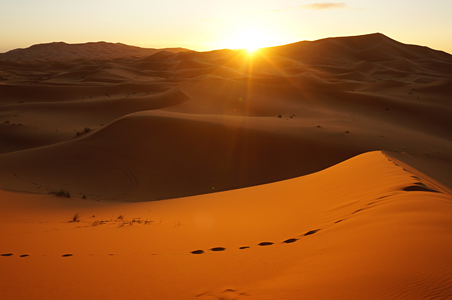 On the edge of the Sahara desert, Merzouga is a town of kasbahs, or mud-walled houses, many of which have been converted into charming places to spend the night; we recommend Maison Merzouga, an affordable option with simple, traditional guestrooms. (Much of the original town was wiped out in the floods of 2006, so many of the current structures are reproductions, but they’re atmospheric nonetheless). There aren’t a lot of restaurants in town, so be prepared to take your meals (likely the Moroccan standards of tagine and couscous) at your hotel. You won’t want to miss the ultimate Sahara experience—riding a camel in the dunes, either at sunrise or sunset. Or let your hotel arrange an overnight trek, where you’ll camp out in the desert in a tent; you’ll never forget the serenity of the dunes when the crowds have left.

Getting There: Merzouga is an eight hour drive from Fez; though it passes through mountains, the drive itself is not very difficult if you choose to rent a car. Hiring a driver does give you more time to enjoy the scenery. 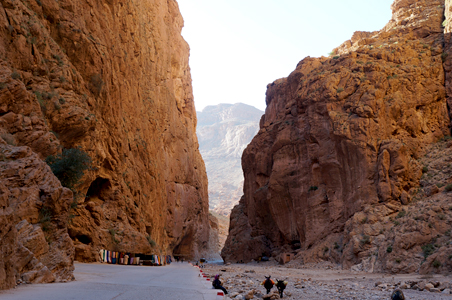 If you come at any time except mid-winter, when it may be too chilly, you can spend a happy day or two hiking around the Todra Gorge, an awe-inspiring canyon surrounded by cliffs and waterfalls. Though there’s nowhere that fancy to stay near the gorge, spend the night at Kasbah Les Roches to be surrounded by stunning scenery.

Getting There: It’s about a three-hour drive from Merzouga to reach the gorge. You’ll pass through the High Atlas mountains, with magnificent views at every turn.

On the Side: Spend a few hours climbing the hills of Ait Ben Haddou, the fortified town where Gladiator was filmed. Gaze at the 17th-century kasbahs perched alongside it, along with the ubiquitous Moroccan stores selling trinkets. 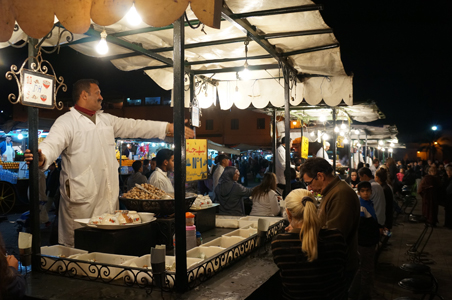 Yes, Marrakech can be as crazy and chaotic—but also exhilarating. Take a deep breath and plunge in to do all the touristy things. Bargain (hard) in the souks; sample all sorts of foods from snails to sheep’s head in the night market; take a horsedrawn carriage, called a calèche, to Yves Saint Laurent’s Majorelle Garden. But make sure you choose your riad wisely, as it will be an escape from all the bustle; we’re partial to cozy La Maison Arabe or, if you want to splurge, the iconic La Mamounia. For even more quiet, stay outside the old town in one of the more modern hotels, like the new Delano Marrakech and soak in the panoramic views from the rooftop. The last must-do is to dine at one of Marrakech’s fantastic restaurants. Try Le Tobsil, set in a restored palace, where you’ll be served a scrumptious and traditional Moroccan meal, by candlelight, or Al Fassia, where you’ll swoon over the renowned slow-cooked lamb.

Getting There: Traveling from Todra Gorge to Marrakech will take about five hours. You can drive yourself, but you may want a driver for this leg, as he or she can drop you in the right spot within the medina. 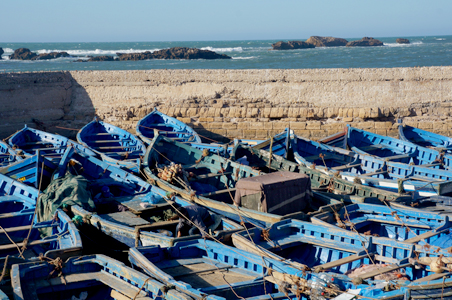 While this could be a side trip from Marrakech, we recommend staying for two days (or more) in white-washed Essaouira. This seaside town with a slightly hippie air is home to many artists, and you’ll find their galleries and boutiques all over town. But the best deal of all are the seafood stands, where you can eat as much fresh grilled seafood as you want—crab, shrimp, calamari, sardines, sea urchin, fish, and more—for a song. (We went back for dinner, lunch, and a snack.) Sleep it all off at Riad Malaika; tucked away down a narrow Essaouria alley, it offers cool, modern rooms with a designer’s touch.

Getting There: Just a three-hour Supratours bus ride from Marrakech; try to buy your return ticket when you buy your original ticket to avoid getting stuck, or ask your hotel to buy tickets for you in advance.

Photo Credits: Tangier via Shutterstock/emei; All other photos courtesy of Liz Humphreys