You’ve heard of Lake Como, home to over-the-top palazzos, super-sleek yachts, and George Clooney’s exploits. But did you know that about halfway between Milan and Venice you’ll find the largest lake in Italy, beloved by Italians and other Europeans (particularly Germans and Swiss), but virtually unknown in North America? Lake Garda’s varied landscape of beaches, mountains, ancient towns, natural hot springs, and, for history buffs, Mussolini lore (more on that later) make it an ideal getaway from early spring till late fall—though be sure to book ahead in the high summer season, when in-the-know Europeans crowd the lake’s resorts in search of outdoorsy R&R. So take a few days to explore… You can thank us later. 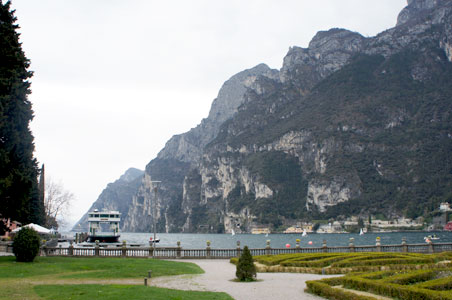 At the lake’s northernmost tip, encircled by mountains, you’ll find the striking mini-resort town of Riva del Garda. Though best known for its prime windsurfing, you can certainly enjoy less active pursuits like shopping the town’s many boutiques or taking a stroll on the quiet path alongside the lake. Just a 15-minute drive north of Riva, spend an hour hiking up to the ruins of 12th-century Castello di Arco—worth it just to gaze down at the lovely scenery in the valley below.

Where to Stay: Lido Palace is the chicest option in town, with fully modernized rooms inside a 19th-century palace, plus a high-end spa.

Where to Eat: Il Re Della Busa, inside Lido Palace, offers magnificent lakeside views, an extensive wine list including interesting local choices, and well-presented dishes, like char fish direct from the lake. 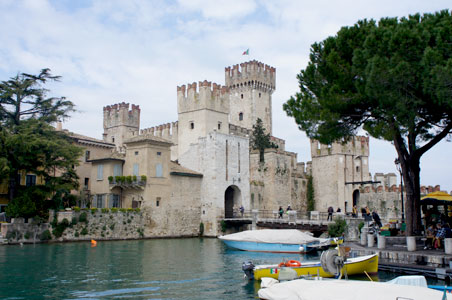 The most touristy of Lake Garda’s towns—for a reason. In this charming town on the lake’s southern shore, you’ll find quaint cobblestoned streets lined with gelato shops and pizzerias; the best-preserved Roman private residence in Northern Italy, Grotte di Catullo; and an outdoor natural hot springs. Though you can see everything in one day, you will likely be seduced by Sirmione‘s charms and decide to spend the night.

Where to Stay: Villa Cortine Palace Hotel, surrounded by a lush secluded park but only a short walk into town, features 54 elegant rooms in a converted 19th-century villa.

Where to Eat: For innovative takes on classic Italian dishes, dine at La Rucola, where you can choose from tasting menus of fish or meat (or both), paired with wines if you choose. 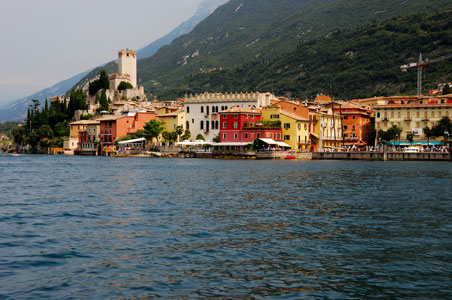 Where to Stay: For a change from the hotels within villas (though, frankly, they’re difficult to tire of!), try the ultra-modern Ambient Hotel Prima Luna, opposite a small beach. 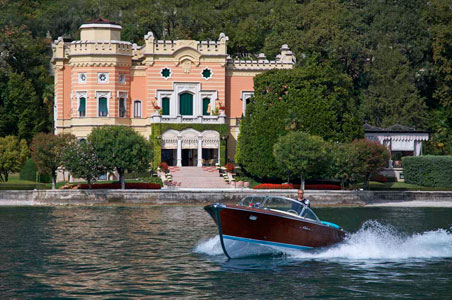 Gabriele d’Annunzio was an early 20th-century poet and soldier whose ideas helped influence Italian fascism. Stroll through the grounds of his quirky palace, Il Vittoriale, complete with mausoleum and battleship in the garden. Italian history buffs will find more to explore in Salo, just south of Gardone, where Mussolini had his headquarters from 1943 to 1945; today it’s a delightful little town of crumbling villas.

Where to Stay: Fancy sleeping in a historic palace? Mussolini and his family lived for two years at Villa Feltrinelli, a magnificent 21-room villa converted into a hotel in 2001, 10 miles north of Gardone near the village of Gargnano. For something closer to town, the Grand Hotel Gardone Riviera was the first hotel to open on the lake, in 1884, and since then has hosted such luminaries as Winston Churchill and Vladimir Nabokov. Today you can relax by the outdoor pool or stroll along the lovely lakeside promenade.

Where to Eat: Villa Fiordaliso, an elegant lakeside Relais & Chateaux property (which boasted both d’Annunzio and Mussolini’s mistresses as short-term residents), houses a lovely one Michelin-starred eatery where it’s easy to while away an afternoon.