Where to Eat in Vegas Now (and Soon)

Forget "Glitter Gulch" or "Sin City," Vegas needs a new nickname—one that takes into account all the award-winning food lining the Strip (and we’re not talking about the buffets). It’s been a well-documented renaissance with everyone from Masa Takayama (of NYC’s astronomical Masa) to Jean Georges Vongerichten opening up in the city’s enormous, air-conditioned resorts. And there’s no end in sight to the desert’s foodie craze.

Where else in the world can you bite into chef Estiatoria Milos’ famed deep-fried and paper-thin zucchini, Mesa Grill’s lobster and octopus ceviche and Payard Patisserie’s macarons all within a short (albeit sweltering) walk? Add Gordon Ramsay’s just-opened steakhouse and Nobu Matsuhisa’s upcoming Nobu Restaurant & Lounge, and you’ve got a foodie haven befitting a new handle. "Gourmet gateway?" (We’re working on it.) 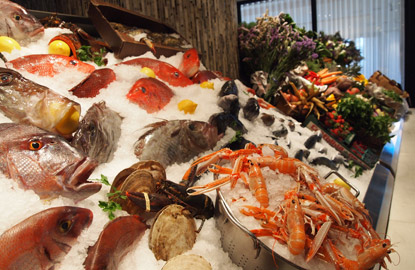 Chef Costas Spiliadis, of Estiatoria Milos in New York, Montreal, and Athens has most recently added an outpost at The Cosmopolitan Las Vegas to his trio of chic Greek restaurants. The Greek Isles transplant brings a bit of the island life’s fish-to-table cuisine into the Nevada desert. Chef Spiliadis prides himself on simple cooking techniques and market-fresh products, following the ancient Greek saying "If you think bigger than the tomato (you’re cooking), you’ve sinned."

Insider Tip: As a fish aficionado, Spiliadis recommends these steps for selecting the freshest fish to cook at home: look at the eyes for clarity, take a whiff to ensure its aroma isn’t fishy, and forge a close relationship with your fish vendor. 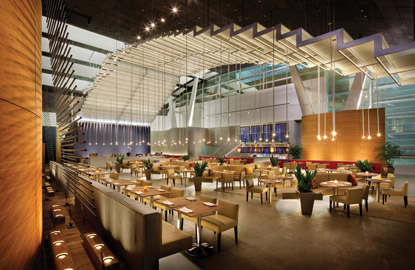 Both a sketch artist and a chef, Masa Takayama started in the family business as fish delivery boy and after a stint as dishwasher in Japan, took to the kitchen to combine his love for art and cuisine. Conquering and delighting foodies from LA to NYC, Chef Takayama’s cultured and multi-award-winning techniques are now display in BARMASA at the Aria Las Vegas. Lauded by Sin City food critic John Curtas as "drop-your-chopsticks delicious," Chef Takayama is firmly planted in Vegas’s food revolution with his unique sushi artistry.

Insider Tip: Before you arrive, decide if you want a casual or intimate modern Japanese dining experience. Chef Takayama has crafted two separate spaces. BARMASA is open, airy, and a la carte, while Tetsu, the chef’s newest venture is a teppan Japanese grilling restaurant-within-a-restaurant, set to open in August. 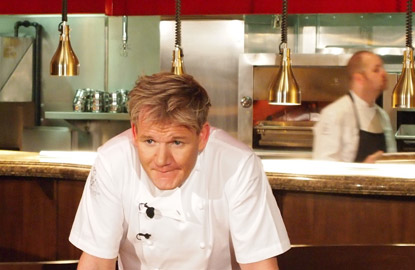 After two years of planning, Gordon Ramsay just introduced his first steakhouse in North America, self-titled Gordon Ramsay Steak, at the Paris Las Vegas. "I felt scrutinized for years because I didn’t have a restaurant in Vegas" said Chef Ramsay at the May 11th opening. Now the pressure’s on, and in his words "The deeper the pressure, the better the perfection", which is a win-win for steak savants.

Sparing no expense, iPads replace menus, a steak trolley swings by every table to assist in selecting the perfect cut, and the entry mimics the Chunnel transporting you from Paris to London. And since we’re talking about Vegas, cocktail servers sport skin-tight black sequined dresses cinched with a thin red belt.

Insider Tip: Book in advance to carve into the restaurant’s beef, dry-aged for 28 days in a Himalayan salt room. Pair it with a red from the restaurant’s list of 400 wines, or order Gordon’s favorite beer, Innocent Gun, to whet your palate. 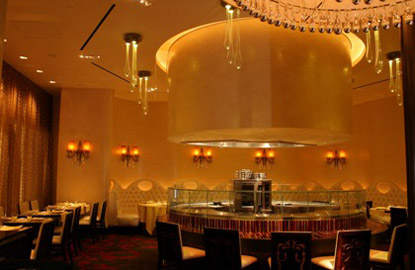 What would a gastro-indulgent soiree be without a sweet ending? As long as your waistband has a little give, what happens in Vegas stays in Vegas at Francois Payard’s decadent Patisserie & Bistro at Caesars Palace. There’s always room left for a made-to-order crepe, or a joie raspberry mousse with champagne ganache, non? The wafting scent alone will send your senses into a French frenzy.

And the New Nobu

Last but not least, Nobu Matsuhisa’s biggest project yet is a restaurant, lounge, and hotel in partnership with Caesars Palace. Set to open in the fall, it will be the Michelin-awarded chef’s first restaurant on the Strip (he has another just off the Strip in the Hard Rock Hotel)—a far cry from his inaugural restaurant in Alaska that burned down within 50 days of its opening.

With a plate full of almost 30 restaurants worldwide, the 327-seat Nobu Restaurant at Caesars will be a staggering 11,200 square feet complete with teppan-yaki tables, a sushi bar, private dining area, and lounge-bar. Not one to let his age or early misfortunes stop him, at 63 years old, Nobu is showing no sign of slowing, with an empire that posts year-over-year growth spurts.

Insider Tip: Nobu Restaurant & Lounge is expected to open in October, and his first hotel one month later in November, 2012.

If Gordon Ramsay remarks that the restaurant competition in Vegas is "fierce," then its official, Vegas’s insane culinary scene just got foodier. Dig in to the "gourmet gateway" and enjoy the show. (It kind of works, right?)