News Apeksha Bhateja What Are the Chances You'll Get Monkeypox at a Hotel?
NewsWhere to Eat in Las Vegas Now

Where to Eat in Las Vegas Now

Blink and you might miss all that’s new in Las Vegas. The restaurant scene changes by the week with newcomers vying for visitors’ attention with the newest and latest ideas. Recently, Sin City has seen a new concept dubbed "vibe dining," a burger joint decked out in museum-quality graffiti art from some of the world’s best, a new nightclub and female-oriented steakhouse from Eva Longoria, and not one but two new restaurants from Hell’s Kitchen and Master Chef host Gordon Ramsay. Here’s a look at what visitors can expect from each. 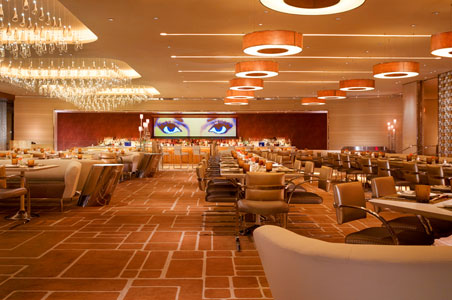 The nightclub-meets-restaurant Andrea’s, Encore Las Vegas’ newest restaurant, takes the place of Switch and dubs itself a "vibe dining" scene. Inside the restaurant named for Andrea Hissom, Steve Wynn’s wife, you’ll find a feminine decor that reminds guests of something out of 2001: A Space Odyssey. Creams, cognacs, pearls, and golds all find a home here in the 6,194-square-foot room with private dining pods and velvet sofas. The entire dining room is lit with 1,000 champagne tinted Venetian glass teardrops. Outside, a 2,100-square-foot terrace overlooks Surrender Nightclub’s outdoor space.

Within the exhibition kitchen, Asian fare finds a home with Joseph Elevado manning the food. The chef who worked under Nobu Matsuhisa at the first Nobu Restaurant in New York City and later Nobu at the Hard Rock Hotel serves up family-style dishes such as crispy crab and scallop, truffled ponzu rock shrimp tempura, and Wagyu sliders, perfect before a night out clubbing. For guests who want more standard fare, look for shellfish on ice, dim sum pot stickers, dumplings, rolls, and scallion pancakes that can be paired with salads, noodles, and variations on fried rice. Like every other restaurant in the Wynn and Encore portfolio, Andrea’s even has a vegetarian and vegan menu.

Most interestingly, the restaurant has a musical chef, one Steve Angello of Swedish House Mafia fame. He leads the music program here that includes top resident DJs who spin sets after 11 pm as the lounge fully transitions into Surrender Nightclub. 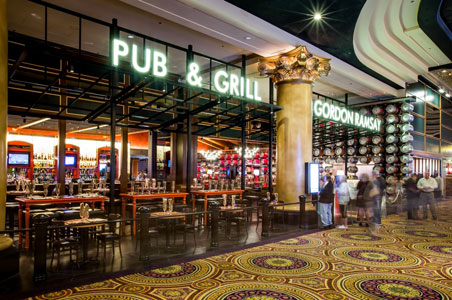 Scottish chef Gordon Ramsay did the unthinkable when he followed up Gordon Ramsay Steak at Paris Las Vegas by opening two restaurants within five days in December. First to open, Gordon Ramsay Pub & Grill, is the chef’s take on an English pub experience at Caesars Palace.

The restaurant is a two-in-one, with different menus and even uniforms on the pub and grills sides. On the grill side find Scottish salmon, lamb T-bone, Irish beef cheek stew with spotted dog, and potted triple chocolate trifle for dessert. The pub features classic Brit pub fare with 24 beers served on tap and 63 bottled beers including a selection of large format varieties. Look for Scotch eggs, pork and duck rillettes, and pub spots—a British version of a slider—as well as a fried egg sandwich and Yorkshire Ale batter fish and chips.

The restaurant itself is laid out like a collection of rooms, each with its own design and seating format. Guests are greeted by a wall of 175 kegs deck out in Carnaby Street stripes as they enter. Artwork replicating the Tower of London, St. Paul’s, and Big Ben adorns the walls. Britain’s red telephone booths stand out behind the bar. And the uniforms are of note, too—inspired by the English punk scene, they’re designed by Glee and Mad Men assistant costume designer Allison Leach. 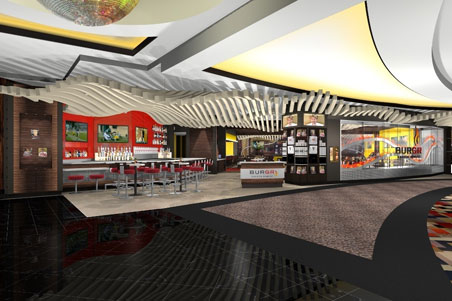 Here Ramsay’s take on the traditional burger, fries, and milkshake goes to extreme heights. For example, the sweet potato fries come with vanilla powdered sugar while the shakes include pudding for added sweetness. All the burgers are cooked over an open flame fueled by hard woods. Look for the Hell’s Kitchen burger with asadero cheese, roasted jalapeño peppers, avocado, and oven-roasted tomato and the Chanterelle burger with chanterelle mushrooms, arugula, and figgy-onion jam.

Ramsay even delves into hot dog territory with Devil Dawgs simmered in hot sauce. BurGR fries are hand-cut and cooked three times to make them extra crispy. Curry ketchup and chipotle ketchup also come on the side. Other dishes include fried chicken sliders, hand-made jalapeño poppers and sticky toffee pudding in a push-pop. And more than 30 beers can be found behind the bar as well.

The 200-seat room features an undulated ceiling, steel and concrete floor, keg display and open kitchen and a fiery wall of art with Gordon himself seemingly on fire. 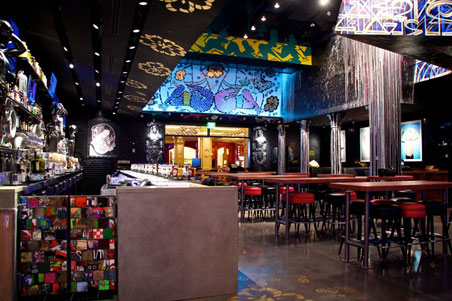 Inside the Italian-themed Venetian, a pocket of Manhattan’s East Village serves up contemporary burger bar designs with a healthy side of pickle passion. From chef Sam DeMarco, whose First Food & Bar is located next door at the Palazzo, Rattlecan resembles a contemporary street artist museum with every surface covered in graffiti artwork and urban design from the mind of HGTV’s Antonio Ballatore.

Their signature burger is topped off with cheese, bacon, caramelized onions, pickle, and special sauce. More adventurous choices include the Roller Gruyere with caramelized onions, crouton, and our cream onion spread. Thanksgiving lovers can opt for the Bomber, a turkey burger with stuffing, cranberry, sweet potato schmear, and naturally, gravy dip. Or they can dare to try the Burner that’ll heats up your night with roasted green chiles, jalapeños, pepper jack, and spicy sauce. 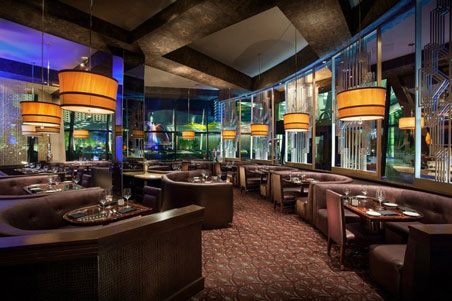 SHe by Morton’s in Crystals is a female-focused steakhouse layered with a theatrical veneer, co-created by actress Eva Longoria. When the restaurant closes for the night, the experience move upstairs to SHe’s nightclub, where every 45 minutes a new act takes the stage.

In the steakhouse, dancers perform on a central catwalk, DJs spin tunes, and unusual variety performers like stilt walkers move among guests while they dine or sip a cocktail at the bar. With a focus on steaks, SHe’s selection comes in three sizes: She cuts, He Cuts, and We cuts, ranging from 6-ounce center-cut filets to a 40-ounce porterhouse for two. Chef Todd Mark Miller, who created the menu, features dishes that are new twists on classic steakhouse fare and newer favorites like spiced Ahi tuna and blackened scallops.

A focus on sharing dishes led to options such as like crab cake minis and sea bass bites. Lobster and Alaskan King crab legs head the seafood selections. And while choosing between tiramisu cups or SHÄ“scake, diners can check their makeup in the mirror built into the dessert menu.

Upstairs, the nightclub has a revolving roster of interactive theatrical performances that rotates every 45 minutes. Tiered seating ensures all guests can witness the intriguing and surprising spectacle.