Where to Eat in Toronto Now

Canada’s largest city boasts a sizable cultural variety, with 200 ethnic origins speaking 130 languages and dialects in neighborhoods that include five Chinatowns, two Little Italys, a Greektown, a Little India, and a Koreatown. Such a societal mash-up makes Toronto a terrific food destination, with over 9,000 restaurants to choose from. Here’s our guide to the newest, hottest, and most delicious, from Yorkville to Ossington Avenue. 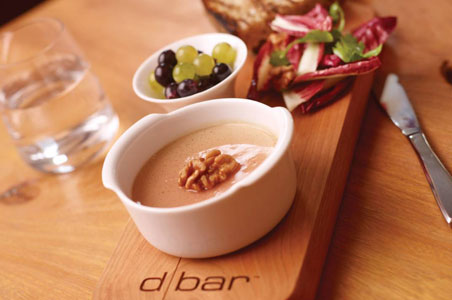 Who says you have to go to Quebec for poutine? Daniel Boulud’s chic and casual Yorkville spot, Dbar, inside the new Four Seasons Toronto serves some of the best outside the non-French reaches of Canada. Despite the dish’s Quebecois roots, you can’t find Boulud’s "Firehouse" poutine– a piquant pile of frites, spicy pulled pork, jalapenos, brown gravy, and cheese curds—in his Montreal restaurant. The rest of the comfort-driven menu reads like a greatest hits from the chef’s renowned casual spots: there’s rustic charcuterie, house-made sausages and gourmet burgers along with locally-inspired cocktails, such as the Yorkville, a blend of rye, Amaro, kirsch cherries and anise bitters named for the surrounding neighborhood.

Craving Boulud’s more upscale cuisine? Then head upstairs to the Toronto outpost of the chef’s popular New York City and Palm Beach restaurant, Café Boulud, where the menu is divided into "La Tradition," with classic French dishes like steak au poivre; "Le Potager," with picks from the vegetable garden; the market-inspired "La Saison;" and "Le Voyage," which celebrates flavors of the world in dishes like octopus a la plancha with Marcona almonds and Jerez vinegar. 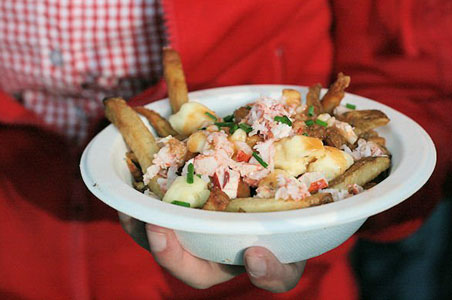 The original pop-up restaurant of the same name was so popular that its cultish customers clamored for a permanent location. And their wish was granted at the end of 2012. As the name hints, this spot on Toronto’s happening Ossington Avenue strip celebrates crustaceans, most notably those from Nova Scotia, in a menu featuring lobster "cappuccino" (bisque), lobster poutine, lobster roll, lobster mac and cheese, and a whole lobster dinner. Even cocktails get in on the theme; order a lobster "Caesar," a spin on a bloody Mary with a generous tail as garnish. 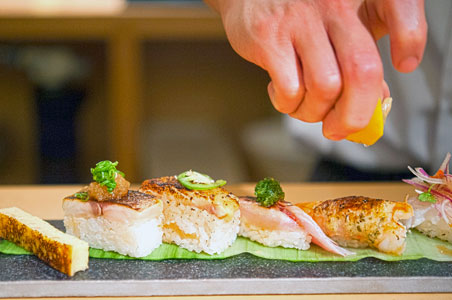 This spinoff from popular Japanese izakaya restaurant Guu stands apart for its focus on aburi (blow-torched sushi) and oshizushi (sushi pressed in a wooden mold). Opened in November 2012 in Toronto’s Entertainment District, it quickly won a following for its high-quality fish and bistro dishes, like smoked duck breast; its popular "demi-katsu" (pork cutlet sandwich slathered with demi-glace) is the go-to dish on the lunch menu. Die-hards pine for the last Sunday of each month, when chef Koji Tashiro serves his "Fisherman’s Platter," a five-course feast for groups of six. 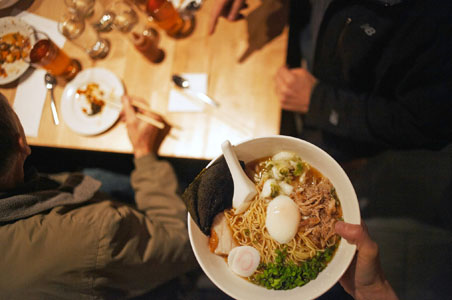 Four concepts from celebrated chef David Chang under one roof almost seemed too good to be true. But it became a reality in September 2012, within a three-story glass cube next to the new Shangri-La Toronto, on the border of Downtown and the Entertainment District. The first level holds Noodle Bar, a spinoff of the New York original, with all of its bun-and-ramen glory. On the second level, Nikai is the indispensible cocktail lounge, where the crowds wait to get into the no-reservation Noodle Bar and Daisho, the largest offering of the bunch, driven by family-style servings of fried chicken and short ribs and mini kegs. Tucked behind Daisho, is Shoto, which the Globe and Mail’s food critic hailed as Toronto’s best restaurant when he graced it with a four-star review in November 2012. With its 22 counter seats, online-only reservation policy, and exciting dishes like veal cheeks with green chile and yuzu sauce, Shoto is currently the hottest seat in town.