News Tina Charisma 'Regenerative Travel' Is the New Buzz Phrase, but What Does It Mean?
Home  >  News   >   Where to Eat In Baltimore

Where to Eat In Baltimore

Baltimore’s dining scene may get overshadowed by all the culinary goings-on in nearby Washington, D.C., but make no mistake: there’s a foodie renaissance underfoot in Charm City. Chefs are embracing the farm-to-table movement, working with growers from across Maryland and Virginia to incorporate locally grown ingredients on their menus, and opening eclectic restaurants in both Baltimore‘s established neighborhoods like Fell’s Point, as well as in up-and-coming ones like Harbor East. Here are six culinary hot spots to check out on your next Baltimore visit. 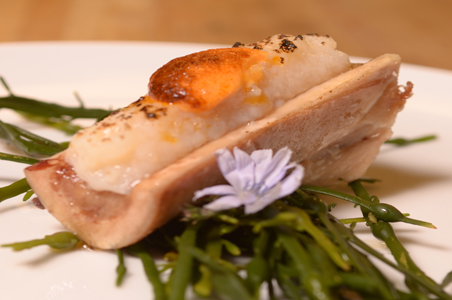 Fork & Wrench, in the hip waterfront nabe of Canton, is a multi-room gastropub fashioned from two adjoining properties, with reclaimed surfaces and a vintage-boho decor. The locally sourced menu, overseen by Cyrus Keefer (formerly of Baltimore’s popular Birroteca), includes dishes like beef short rib tortelli with white corn and pine nuts, and BBQ quail in a green bean relish. Next year, the owners also expect to open a restaurant/market in the luxury Union Wharf building in Fell’s Point. 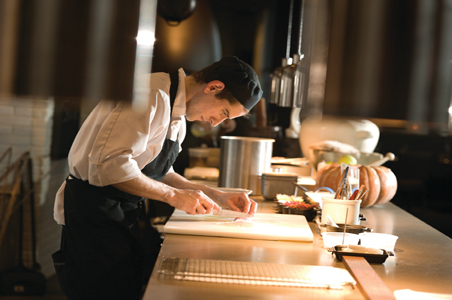 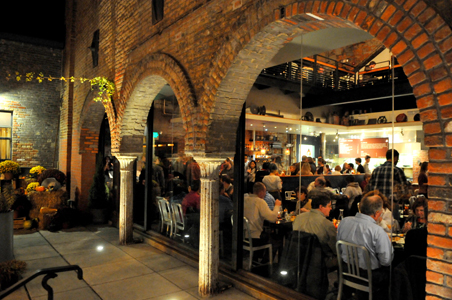 Spike and Amy Gjerde’s Woodberry Kitchen, housed in a former mill, is one of the pioneers of Baltimore’s farm-to-table movement and should be on every visitor’s hit list (folks from D.C. regularly make the drive to dine here). The menu relies on the bounty of the Chesapeake region and neighboring farms, touting entrées like Heritage Acres smoked turkey leg with wilted chard, and Tilghman Island crab cake with wood-roasted zucchini. Also, check out the Gjerdes’ newest spot, Shoo-fly, a farmhouse diner set in Belvedere Square.

Located in Harbor East, Ouzo Bay is a stylish newcomer serving Greek cuisine with an emphasis on fresh seafood. Amid mosaic tiles and cherry wood tables, a glamour crowd appreciates the authentic dishes, including appetizers like grilled calamari in a caper-and-feta vinaigrette, and mains like grilled lobster trail with drizzled olive oil and lemon, or the house specialty, charcoal-grilled whole fish. And be sure to sample some of the anise-flavored liqueur the restaurant is named for—just remember to say opa!

Fleet Street Kitchen is part of the Bagby Restaurant Group, which owns the casual-but-cool Bagby Pizza Co. and Ten Ten bistro in Harbor East. The restaurant’s modern American cuisine, courtesy of executive chef Chris Amendola, is very much rooted in farm-to-fork philosophy—in fact, ingredients, including vegetables, eggs, and herbs, are grown at the company’s nearby Cunningham Farms. Menu items might include Springfield Farm pork in a gingerbread puree or braised beef short ribs with red currants.

Though only a few years old, Waterfront Kitchen in Fell’s Point, with its spectacular harbor views (and touting a large patio, open in summer), has become a go-to spot for gastronomic goodness. The kitchen turns out seasonal dishes such as Maryland crab soup, eggplant-and-goat cheese terrine, pecan-stuffed local quail, and Chesapeake Bay blue catfish with a green curry. Next year, look for sister restaurant Farmstead Grill, opening at Canton Crossing.