News Michelle Spinei Uh Oh, the Travel Influencers Are Back. This Is What I'd Like to Tell Them.
Home  >  News   >   Where to Drink Wine at Walt Disney World

Where to Drink Wine at Walt Disney World

Soft drinks and juices are expected fare at Walt Disney World but it turns out this epic amusement park in Orlando is home to some of the country’s best wine stash. 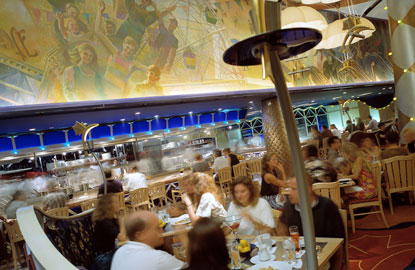 News Michelle Spinei Uh Oh, the Travel Influencers Are Back. This Is What I'd Like to Tell Them.
Continue Reading Article After Our Video

At Flying Fish Cafe inside BoardWalk Inn, a resort inspired by the Atlantic City Boardwalk, you get the royal treatment with a five-course Chef’s Tasting Wine Dinner ($149 per person) for up to six guests. Sommelier-created wine pairings accompany each course, which might include native pepperberry and wattleseed-crusted entrecote of Angus beef paired with 2005 Cyan Cinta de Toro, Zamora do Torom, Spain; or organic Scottish smoked salmon three ways paired with Graham Beck Bliss Demi-Sec, South Africa. From your seat at the chef’s counter (granite countertop in front of the open-air kitchen), you get to watch the meal being prepared. There are two seatings nightly: at 5:45 pm and at 8:15 pm. Included in the experience is a picture taken with the chef (Tim Keating, chef de cuisine, has received four James Beard nominations for Best Chef Award) as well as a souvenir copy of the menu. Even if you don’t splurge for the wine dinner, there are 22 flights on the menu, including two focused on Napa Cabernet Sauvignon, along with 50 wines by the glass and many half-bottle carafe. 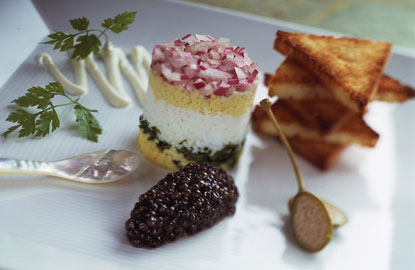 Start making plans now to eat at Victoria & Albert’s inside Grand Floridian Resort & Spa (and the park’s highest credentialed dining experience, hosting one of two master sommeliers), because there are only 14 tables (with two nightly seatings) in the dining room. The menu changes daily based on seasonal ingredients. Wine aficionados may want to spring for the Chef’s Table ($210 per person, with an additional $105 for wine pairings), which is available for reservations at 5 pm nightly for up to 10 people. You are seated within a few feet of the kitchen where chef de cuisine Scott Hunnel (this year he was a James Beard Award semi-finalist for Best Chef-South) prepares a 10-course dinner that’s skillfully paired with wines. One stunning example is 2009 Mollydooker The Maitre ‘D Cabernet Sauvignon, South Australia, with Colorado bison and garlic-potato puree. (Or, ponder this beauty: Peruvian chocolate cylinder with elderflower sauce, chocolate and Navan bubble.) The wine list features 700 selections, from the pricey and well-regarded 1961 Chateau Margaux and various vintages of Domaine de la Romanée-Conti to many quality bottles under $75 (like the 2001 Caymus Conundrum, California, for $57). 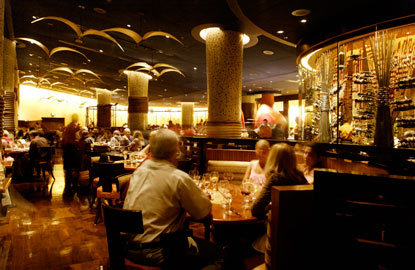 Located inside the Animal Kingdom, the focus at Jiko is, fittingly, on South African wines but what you might not expect is that each member of the wait staff has received extensive training in all things vino. So if you have a query about a tricky food pairing (like traditional "bunny chow" or a white to drink with West African braised beef short ribs with roasted peanuts and spicy tomato demi-glace), don’t fret. Jiko hosts one of the largest selections of South African wines outside of South Africa, allowing you to try bottles that have catapulted this country into recent acclaim, like Pinotage and Chenin Blanc. Fifty-some wines are available by the glass and the most expensive bottle is $105. There are two experiences just for wine lovers: Wednesday wine tastings paired with artisan cheeses, and a wine-dinner series held four times a year with South African winemakers as hosts to a six- or eight-course meal. (Yes, you’re still at Disney.) 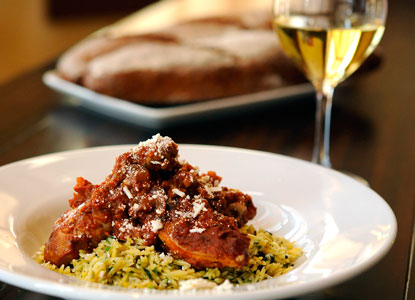 Since 2009, celebrity chef Cat Cora (she’s been on "Iron Chef" and co-hosted "Around the World in 80 Plates" earlier this year) has had her own restaurant, Kouzzina by Cat Cora, at BoardWalk Inn. Reflecting her Greek heritage, it’s also where her private-label wine—Coronation—is poured. While the restaurant’s menu hones in on Cora’s spins on Greek favorites, like lamb, baklava, and spanakopita, with The Chef’s Menu at CoraNation Room you can go deeper. A five-course meal ($65 per person, extra for wine pairings) is paired with wines (including Coronation’s Sauvignon Blanc, Chardonnay, Pinot Noir, and Cabernet Sauvignon, all from California appellations), and includes interactions with the chef. It’s available for reservation at 6:30 pm on Friday and Saturday for up to 24 people. Some of the dishes on the menu include lavender mustard lamb loin with cipollini stifado, toasted orzo, and chanterelles. If you’re in a hurry but still want to check Cora’s wines out, order the "Cat Flight" of three Coronation wines ($17-$19).

The fact that wines from Canada are rarely found on menus in the States should not give them any sort of lackluster reputation. You’ll discover why their worth a second look when you slip into a seat at Le Cellier Steakhouse in the Canada Pavilion at Epcot. It’s designed to replicate a grand hotel’s wine cellar. Wines from Canada’s Okanagan Valley and Niagara Peninsula are available by the glass or the bottle. Choose from Mission Hill Oculus Bordeaux Blend (from British Columbia’s Okanagan Valley) or No. 99 Wayne Gretzky Estates (from a Niagara Peninsula winery named for Canada’s most famous hockey player), for instance. A $29 prix-fixe lunch menu of Canadian specialties—from Canadian cheddar-cheese soup to maple crème brulee—provides lots of opportunities for DIY food- and wine-pairing. Be sure to ask for a Nanaimo bar, which is a bar-cookie treat originating from British Columbia (the suggested pairing is Taylor Fladgate LBV Port, Portugal).

Want more Disney secrets? We revealed the best ways to save at Disney, and where to splurge!