Where to Drink Beer in Oregon

Pop quiz: Which city has the most breweries in the world? If your mind went to Munich, you’re wrong. Brussels? Nice try, but no. Prague? Not quite. The answer is: Portland, Oregon, home to 51 breweries. Oregon, with its 120 world-renowned craft brewers, has been known for the gift of grog since German settlers arrived, along with their suds skills, in the mid-nineteenth century. Why is the beer so good? Some say it’s because of the pristine local waters. Others surmise that it is due to the careful cultivation of hops and barley from the nearby farms. Or, as beer scribe Christian DeBenedetti said while co-moderating a beer panel for Feast Portland recently, “Oregon has a lot of gray weather so we spend a lot of time inside drinking beer.” The variety is vast, so sussing out Oregon’s best brews can be overwhelming. We’re here to help, with a crib sheet of some of the best stops for beer in the Beaver State. 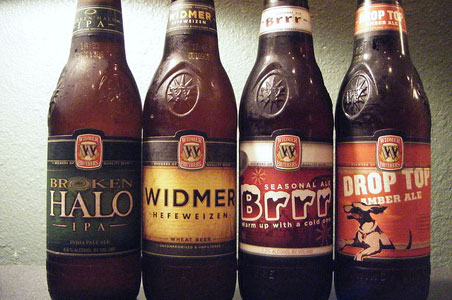 This newcomer (founded 2010), known for experimenting with flavors like kombucha, ginger, and beet, releases one new beer a week. Its highly-regarded gastropub cuisine draws food lovers, too.

Taste this: Cucumber Gose. This German-style brew smacks of lime, cucumber, and coriander. Sea salt edges its zesty finish; think of it as the margarita of beers.

Kurt and Rob Widmer grew from being home-brewing enthusiasts to the 9th largest brewer in the US. Established in 1984, the brothers helped launch the annual Oregon Brewer’s Festival, which celebrated its 25th year in July 2012.

Taste this: SXNW. The dark chocolate color gives away the “dessert” aspect of this beer, and the coffee-like aroma, and nutty flavor reveals that the brown ale is brewed with pecans, cocoa nibs, and cinnamon. A hint of ancho chile adds pizzazz.

Or, try a tour: Brewvana Portland 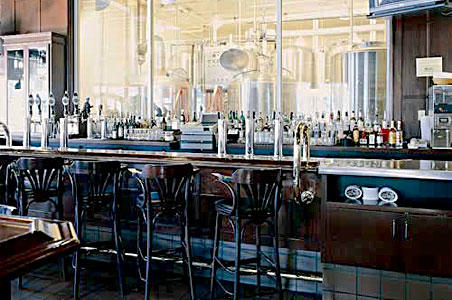 Named after the Sumerian goddess of beer, Ninkasi started as a simple brewpub in 2006. Their popularity has them eyeing an expansion that will produce 90,000 barrels a year.

Taste this: Tricerahops Double IPA. IPAs are this brewer’s specialty, so why not try double the IPA, with double the flavor? Hoppy and malty with floral and citrus notes, its frothy head makes it a beer youâ€™d like to clink mugs with. Its powerful flavor ensures it wonâ€™t be extinct anytime soon.

Though brewery tours are by appointment only, a brewpub on the premises allows for easy tasting. This Oregon original (since 1991), which expanded to two more breweries in California, is also known for its root beer.

Taste this: Barracuda Blonde. Light, mild, and creamy with a fruity, hoppy finish. Its effervescent body, and refreshing flavor, makes it the perfect warm-weather brew.

Or, try a tour: My Party Bus Hop Around the Valley 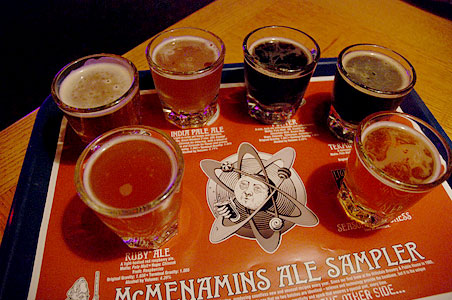 Making beer since 1985, McMenamins now boasts 24 breweries around the Pacific Northwest. This branch, located in the basement lunchroom of a former Catholic school, has been in operation since 2004.

Taste this: Gunslinger Pale Ale. The most popular creation from Old St. Francis is medium-bodied with a slight bitter flavor and dry, hoppy finish with floral notes that linger on the palate.

Brewer/co-owner Tony Lawrence assembled his brewery by refurbishing the old and unused equipment from the “boneyards” of other brewers. Opened in 2010, its small tasting room serves a rotation of five beers.

Taste this: Girl Beer. This cherry-essenced brew, created “with the ladies in mind,” has won plenty of gentlemen fans, too. A light and smooth wheat ale, it features a blend of three kinds of Oregon cherries: dark, sweet, and tart.