News Annette Richmond Meet the Activists Reshaping the Travel Industry for the Better
Home  >  News   >   Where We’re Going in ’08: 7 Places Americans Have Yet to Discover

Where We’re Going in ’08: 7 Places Americans Have Yet to Discover 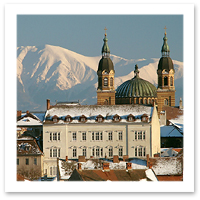 Romania: Americans flock to Eastern Europe’s Prague and Croatia but tend to overlook Romania. What’s to miss? Oh, just some of Europe’s best-preserved medieval towns, including Brasov and Sibiu, and 45 miles of sandy beaches along the Black Sea coast. Additionally, the place is loaded with moody castles, including 14th-century Bran Castle, famously the home of Count Dracula. Travelers typically head into Bucharest, Romania’s largest city and capital. Here, check out the Lipscani District, a zig-zag of cobblestone streets lined with antique shops and coffeehouses, and 19th-century Sutu Palace, which houses the Bucharest Art & History Museum. Hang your hat at Rembrandt Hotel (from $110), a trendy 16-room boutique property within walking distance from most sights. Or you could try the more opulent Athenee Palace Hilton Bucharest (from $350). Delta flies here nonstop from New York’s JFK with fares starting at $570. You can also take KLM through Amsterdam or American Airlines through London starting at $600.

Talk Travel in the Forums: “Heading to Romania — what day trips should I take?”

Kraków: Although their U.S. counterparts haven’t quite caught on yet, nightlife-loving Europeans know Kraków is now the place to party. A large part of the attraction is the legendary Zywiec beer, a heady brew that is as cheap as it is plentiful. But the range of places to drink it, running from traditional pubs to Euro-trendy clubs, also plays a part. The open-air establishments rimming Rynek Glówny (Europe’s largest medieval square) are a good place to down a pint on warm evenings; at other times the action goes underground into the dance-til-dawn bars that occupy Old Town’s vaulted cellars. Kraków looks pretty good once the sun rises, too — Wawel Hill, with its castle and cathedral, and the atmospheric Jewish Quarter (Kazimierz) beg to be explored on foot. For a truly sobering experience, make the 38-mile-drive west to Auschwitz. When you are finally ready to hit the sack, consider checking into Hotel Amadeus. Its two-night sightseeing package costs €288 for two guests. Most tourists get to Krakow through Warsaw, though national air carrier LOT now has direct flights from New York and several European cities.

Talk Travel in the Forums: “What are your favorite restaurants and bars in Krakow?” 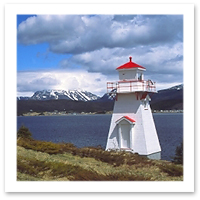 Newfoundland: In 1492 Columbus sailed the ocean blue and discovered North America. Right? Wrong. Leif Eriksson earned that distinction when he landed on Newfoundland back in 1000 AD. This isolated Atlantic Canadian province has been greeting seafarers ever since. Few of them, however, are U.S. citizens. That’s a shame because Eriksson’s excavated settlement at L’Anse aux Meadows is well worth seeing; as is the fjord-like landscape of Gros Morne National Park, which visually evokes his homeland. Another rewarding destination is Twillingate, a stamp-sized outport on Notre Dame Bay that justifiably bills itself as “The Iceberg Capital of the World.” Since much of “The Rock,” as Newfoundland is affectionately called, remains remote, the provincial capital has by far the best selection of accommodations. Amid St. John’s jellybean-colored row houses and rollicking bars you’ll find everything from an up-market Fairmont Hotel to down-home B&Bs that charge less than $100 a night.

Tunisia: Tell people you’re going to Tunisia and you’ll most likely get blank stares from Americans. Europeans, on the other hand, nod knowingly. Thanks to old colonial ties, this prosperous and peaceful country, wedged between Algeria and Libya, is a favorite destination among the French. Brits and Germans flock here, too, lured by low prices, a reliably sunny climate, and a jaw-dropping assortment of sites. Aside from the expected medinas and mosques, Tunisia has some of the best Roman ruins anywhere: the coliseum at El Jem and the temples of Sbeitla being only two examples. The real draw, however, is Tunisia’s diversity. Within a matter of hours you can drive from the Mediterranean beaches of Djerba (a resort island popular enough to support three Club Meds) through villages that were used as filming locations for the Star Wars movies, and into the Sahara. Visiting the last of these is a mostly “in-tents” excursion. Board a camel for a bare-bones camping experience ([email protected]; about $30 per person) or go upscale at the ultra-chic Pansea Ksar Ghilane (doubles from €129) tent resort. Air France has regular flights to Tunisia from New York and Paris.

Talk Travel in the Forums: “Do you have any advice for a couple going to Tunisia this spring?” 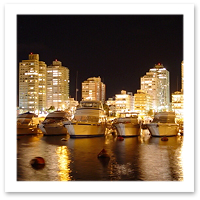 Uruguay: Each summer, denizens of Buenos Aires and Rio de Janeiro make a beeline for Uruguay. As for the rest of us, well, we’d have trouble finding it on a map. Nevertheless, there are good reasons why this tiny country squeezed between Argentina and Brazil ranks as a South American hot spot. For starters, it has a compact colonial capital (Montevideo) that is distinctly different from BA or Rio; and its interior provinces, with their estancias and gauchos, are positioning themselves to become the next “Pampas.” The biggest draw is the peninsular resort town of Punta del Este (photo, right). Washed by both the Atlantic and the Rio de la Plata, it offers endless opportunities for beach bumming and boating. Indulging in retail therapy is popular, too, thanks to the chichi shops and brand-name boutiques of Calle 20. Punta, moreover, has a high-octane club scene that makes going out seem like an X-treme sport. Stay in the heart of the action at the glitzy Conrad Resort & Casino. In season, rooms start around $220. Aerolineas Argentinas has flights to both Montevideo and Punta del Este from Buenos Aires.

Turkey: Everyone knows about Istanbul and the archaeological complex at Ephesus with its early Christian connections. Yet the Turquoise Riviera, farther south along the Mediterranean coast, is a relatively new tourist draw, especially among outdoors-y types, who love this stretch of the Med, with its Calgon-blue water, gorgeous gorges, loggerhead turtle breeding grounds, and pine-blanketed mountains that drop down to sublime beaches. Alas, Europeans have long known about this region, and the resorts built for them are changing the character of the place. If you want to avoid the hub-bub, steer clear of tourist-heavy areas like Dalaman in the west and Antalya in the east. Want to avoid people altogether? Sign up for a “blue cruise” aboard a wooden gulet. In summer, prices start around $80 per person per night. Istanbul is the international gateway to Turkey. Delta has daily flights from New York and most major European cities.

Talk Travel in the Forums: “Should we include Ephesus or Cappadocia in our Turkey itinerary?” 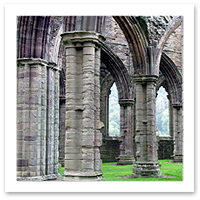 Wales: This is the perfect place for those who like an off-the-beaten-path destination. Wales has hundreds of castles for history buffs (it’s said to have more per square mile than anywhere else on earth) and there are ample literary shrines for poetic souls, Wordsworth’s Tintern Abbey (photo, right) among them. Cardiff, the capital, is young and vibrant, and Wales has plenty of terrific places for a leisurely “ramble,” from the unsullied beaches of Barafundle Bay in the south to the heights of Snowdon Mountain in the north. Accommodations can be quirky, especially if you book through Under the Thatch, which lists more than two-dozen vacations rentals, including a 17th-century farmhouse, an Edwardian railway carriage, and converted gypsy-style caravans. Prices start at £65 for a one-night stay. Manchester International Airport is a good gateway for North Wales, and Cardiff International Airport has direct flights to European destinations and Canada. Heathrow and Gatwick airports have excellent door-to-door motorway links with Wales.