When to Go to Rome: A Reason for Every Season 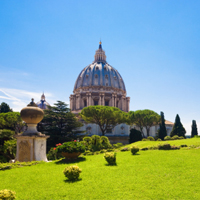 I have stood under the open “eye” of the Pantheon’s dome in an April shower, watched a red summer moon rise over the Colosseum, shuffled through autumn leaves along the Tiber, and beheld the astounding sight of Rome’s roofs under a blanket of snow. But when asked the best season for a trip to Rome, my immediate response is any time—as long as you know what to expect and plan accordingly.

La Primavera (Italian for Spring) transforms Rome. Restaurants double in size as outdoor tables spill onto every piazza. Musicians play in arched doorways. Couples stroll arm in arm or lock themselves in embraces on park benches. Appearing as if by magic, potted pink and fuchsia azaleas create a dramatic floral display on the Spanish Steps. To add to the festive air, Rome celebrates its birthday on April 21, with reenactments of scenes from ancient history, concerts, fireworks and the splendid sight of the ancient forums illuminated at night—all open to the public and free of charge.

Museums are less crowded than in summer, although you’ll run into student groups from around Italy as well as from other countries. If you’re an art lover, keep in mind that some statues and paintings in churches may be temporarily swathed in purple, the traditional penitential color of Lent.

Pilgrims flood into Rome throughout la settimana santa (the Holy Week leading up to Pasqua (Easter). The tourist information kiosks throughout the city can provide a schedule of religious concerts and ceremonies. On the evening of Good Friday the Pope commemorates the Stations of the Cross at the torch-lit Colosseum amid thousands of candle-holding onlookers—one of my most unforgettable travel experiences.

The papal Masses on Palm Sunday and Easter morning in St. Peter’s Square also are magnificent, not-to-be-missed celebrations. The crowds, though enormous, are well-managed by the Vatican’s impressively uniformed Swiss Guards. You do need to obtain tickets for admission in advance.

On June 2 Italy celebrates its equivalent of Independence Day with a patriotic parade, which you can watch live in Rome or on television. As summer progresses, expect rising temperatures and surging crowds so take advantage of the off-hours. Lines at the Vatican museums tend to be longest in the morning, but the throngs thin by late afternoon. Rather than baking under the midday sun at the forums or Palatine Hill, come later in the day when you’ll find more shade and a pleasant breeze.

Remember that even on the sultriest days, Rome’s grand stone churches remain refreshingly cool, but do dress appropriately. As a sign of respect (strictly enforced at some churches), women must cover their shoulders and knees.

The long warm evenings are ideal for strolls along the Tiber or through the expansive Borghese gardens. One of the loveliest places to watch the often breath-taking Roman sunset is the adjacent Pincio, a terraced park directly above the Piazza del Popolo with a stunning view of the city.

Romans traditionally take their vacations in August. You’ll find fewer people on the streets—and fewer restaurants and shops open. If you’re staying at a hotel, you may not be too inconvenienced. If you’re making your own meals, you may have to trek farther to find an open market.

This is my favorite season, with warm sunny days and pleasantly cool evenings. Romans, back from vacation, energize the city with their vitality. New musical and theatrical seasons begin, and piazza fill with displays for various harvest festivals.

Museums, particularly those with special exhibitions, remain crowded. But since the weather is so delightful, fall is a great time to wend your way through the city’s maze of narrow lanes and tiny “piazette” and discover visual delights at every turn. Equip yourself with a good map, comfortable shoes and a camera, and explore the city a quartiere (neighborhood) at a time.

I recommend walks along two quiet hills, the Aventine and the Janiculum, both providing panoramic views over the Tiber. Beyond the centro (city center), you might venture to the historic Appian Way or the tree-lined paths of Villa Ada. And wherever you wander in Rome, you can be sure to find a comfortable place to recharge with an espresso or gelato.

Snow in Rome, Italians say, is as rare as a “morte del Papa” (death of a pope). After a quarter-century without a flake, snow fell in February, which stunned natives and visitors alike. Without shovels or plows, Rome simply stopped for a few hours of snowman-building and snowball-throwing.

Typical winters are rainy and cold. Romans wrap themselves in fur and leather to stay warm. I suggest dressing in layers and wearing flat, water-proof shoes or boots. Churches and museums, with their vast, high-ceilinged spaces, can chill visitors to the bone, while small shops may be overheated.

After the Christmas holidays, hotel rates are generally lower. January brings citywide saldi (sales) with price cuts of 50% or more. But the greatest advantage of a winter visit is the feeling that you’re in the “real” Rome, rather than a tourist destination.

Restaurants are uncrowded and welcoming. Shopkeepers have time to chat (and complain about the weather). The museums are so tranquil that you can linger in front of a work of art rather than being jostled along. And when the sun blazes through the clouds, Rome’s skies seem brighter and bluer than ever.

Dianne Hales spent considerable time in Rome studying Italian and doing research for her book, La Bella Lingua: My Love Affair with Italian, the World’s Most Enchanting Language, which is now available in paperback. You can find out more at becomingitalian.com.