Beaches Kaila Yu Do You Enjoy Visiting Hawaii? You Should Pay a Fee
Home  >  News   >   What’s New in London 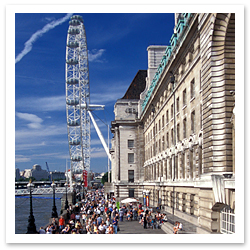 Samuel Johnson’s often-quoted opinion, that when a man is tired of London he is tired of life, sounds a bit provincial in our era of constant innovation and cheap, planet-shrinking travel. But something powerful does bring people back to London again and again, and it certainly isn’t the weather.

Maybe, besides the evergreen attractions of London’s museums and parks, its department stores and beloved Royals, repeat visitors are irresistibly drawn to what’s new. Because the fact is, wait about five years between visits and you are bound to find plenty you haven’t seen before. If you’ve been away for a spell, here’s what you’ve missed:

Bankside Facelift
In the five years since British Airways’ giant London Eye (photo, top) opened on the South Bank, the Thames-side ambiance has changed almost beyond recognition. The “Eye,” a Millennium folly that quickly became London’s most popular attraction, now anchors one end of a completely revitalized South Bank/Bankside district.

Next to the “Eye,” the first phase of the Royal Festival Hall’s $91 million facelift, Festival Riverside, was completed this year. The project, nearing completion, has already turned the once unloved, graffiti-plastered and windswept concrete passages between the South Bank’s theaters and concert halls, into a wide promenade dotted with art installations, cafés, galleries, shops, and open-air performance spaces. 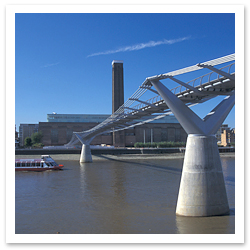 Farther east along the Thames, at the other end of the developing South Bank/Bankside district, the Tate Modern, in the former Bankside Power Station, has just revealed its first major rehang since opening in 2000, showcasing, among other things, its last five years of acquisitions.

Sweeping across the Thames from the Tate to St. Paul’s Cathedral, Sir Norman Foster’s Millennium Bridge has overcome its teething troubles. (It vibrated so badly on opening in June 2000 that it had to be closed immediately and stayed closed until February 2002.) Foster’s recent controversial addition to the London skyline, the Swiss Re building, noses up among other City of London buildings like a space ship. Londoners have defused its extraterrestrial quality by naming it “The Gherkin.”

Adding to the futuristic atmosphere is the new Tate Boat, which plies the river like a shuttlecraft from the starship Enterprise. The 220-seat, ultra-modern catamaran ties both sides of the river together, running between the Tate Modern, the London Eye, and the Tate Britain, which houses the national collection of British art, on the north bank. Fans of contemporary art will delight in knowing that the interior and exterior designs of the boat are by Damien Hirst.

A Foodie’s New Favorite Market
Several international hotel chains, have established South Bank/Bankside outposts, so it’s now even possible to stay in relative comfort south of the river. The 186-room Marriott London County, in the rather grand former County Hall Building, may not be the trendiest hotel in town but it is hard to fault the view of Big Ben and The Houses of Parliament, directly across the river. The Premier Travel Inn shares the same building, offering cheap, decent accommodations in a good location, but without the spectacular views.

On Fridays and Saturdays, visitors who continue along the river walk, past Shakespeare’s Globe, and the reconstruction of Sir Francis Drake’s Golden Hinde, are rewarded with London’s best new free entertainment, Borough Market. 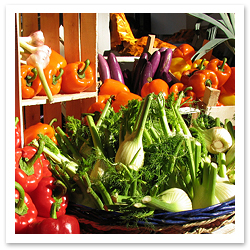 There has actually been a market or market fair in this area since before Roman times. But, in the past five years, Borough Market has morphed from a ramshackle agglomeration of local stalls and food wholesalers into London ‘s trendiest foodie market. Organic vegetables and herbs, perfect cheeses from all over Europe, wines, olives, chocolates and gorgeous breads, vie for attention with organically farmed meats, fresh fish and game.

Visitors lunch their way around the market on such goodies as sauteed scallops served on the halfshell at Shell Seekers, Jamie Oliver’s scallop man; prawn wraps with crê­¥ fraiche, garlic and chili from fishmonger Mr. Applebee; and Mrs. Bassa’s home made samosas and pakoras sold alongside her handmade chutneys and spice mixtures.

Dim Sum for Divas
If elsewhere south of the river the dining scene is relatively basic, across the Thames it is anything but. New restaurants with staying power to challenge London’s established stars are popping up everywhere. The Cinnamon Club, in the Old Westminster Library, rivals Mayfair’s Tamarind in the new wave, gourmet Indian stakes. Also in Chelsea, Tom Aiken is giving stellar international chef Gordon Ramsey’s weekday-only restaurant a run for the modern British/Continental glory. Irish gourmet Richard Corrigan re-interprets hearty, rustic cooking at Lindsay House in a 150-year-old Soho townhouse. And diners who don’t blanch at spending between ?50 to ?100 per person for dim sum, are lining up for Hakkasan (8 Hanway Place, W1, 020 7927-7000) in Fitzrovia and Yauatcha (15 Broadwick Street, W1, 020 7494 8888) in Soho. 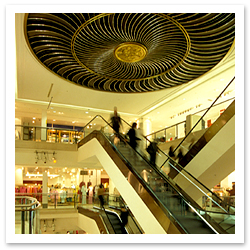 Stylish, Not Staid
Harvey Nichols and Harrods may be more famous with tourists but Selfridges, a something-for-everyone department store and one of the grand old ladies of Oxford Street, has pulled itself into the fashion and design frontlines with a 21st century facelift and outrageous annual retail theatre events. In 2000, British artist Sam Taylor-Wood wrapped the exterior in the world’s largest photographic artwork. Vegas Supernova, its recent celebration of 100 years of Las Vegas, included an “Ultra Lounge” with divas, crooners, showgirls, and illusionists.

The Fashion Circus Moves On
London’s restless shoppers are always on the lookout for the next big thing. As soon as Notting Hill established itself as the “in” place for idiosyncratic boutiques, the retail circus began looking elsewhere for excitement. At the moment, canny shopaholics are prowling the narrow East End streets and lanes between the Spitalfield’s Market redevelopment, Brick Lane, and the Columbia Road Flower Market for unusual housewares, ceramics, and lifestyle shops tucked in around the stall holders of this multi-ethnic weekend market. Like the market, most shops are open weekends only.

Cheshire Street is prime territory for small, high concept shops that are fun while they last and sell merchandise that can’t be found anywhere else. Mar Mar Co, at number 16, has brightly colored Scandinavian ceramics and other products with a strong graphic design element. 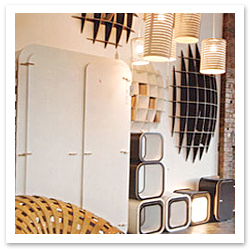 A few doors along, at number 18, Labour and Wait sells a grab bag of hardware, work clothes and household objects valued for their timeless, functional design—useful objects you never knew you needed until you saw them. A popular London magazine just named this shop number one on its list of London’s top 100 stores. Unto This Last (photo, right), at the top of Brick Lane uses computer-animated design and manufacture to create futuristic custom-made furniture and decorative objects at mass-production prices. You can watch the process through a window in the shop.

Brick Lane Beigel Bake, at 159 Brick Lane, London’s oldest and most famous bagel bakery, is a reminder of this immigrant area’s past as a primarily Jewish neighborhood. Now, shoppers too hungry to wait in the queue for a bagel with smoked salmon or salt beef can choose from an amazing range of Indian, Pakistani and Bangladeshi cafés, or visit nearby Spitalfield’s Market for an even more international array of cafes and food stalls.