News Amy Fallon With Violence Continuing There, Should We #VisitUganda?
Home  >  News   >   What We’re Watching: An Idiot Abroad

What We’re Watching: An Idiot Abroad 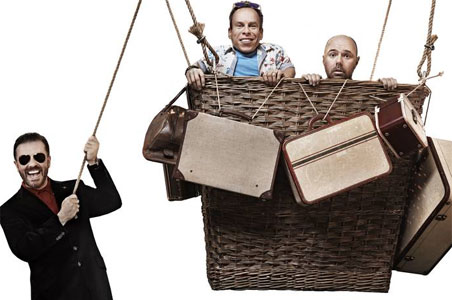 Travel television shows generally highlight the exotic and awe-inspiring realms we mortals dream about but rarely get to see. Even the "fun" ones are very serious about bringing culture into our little plebian lives. But every once in a while a travel show does the opposite, dragging our cultural IQs down a spiral staircase of whining, exploitative, low-brow humor.

And don’t we love it?

Cue An Idiot Abroad, the British TV show created by Ricky Gervais and Stephen Merchant that sends Gervais’ close friend, the titular idiot Karl Pilkington, around the world to essentially complain about it. Pilkington, a slack-jawed writer and once-radio-producer, has been to Brazil, Egypt, Jordan, and elsewhere, but as Season 3 premiered on the Science Channel this month, Gervais threw in a twist—a "little company" for Pilkington in the form of veteran actor and little person Warwick Davis. The odd couple embarks on a trip to retrace Marco Polo’s route from Venice to China, with Gervais regularly checking in. Grumbling and hilarity ensue.

From Venice the two take a jaunt to Macedonia, where they camp with some Romani gypsies who rub the head of a very uncomfortable Davis for good luck…repeatedly. Exploitative? Sure. Hysterically funny? You bet. But nothing compares to a scene in which Davis is bullied by Pilkington into ascending into the sky attached to a bunch of helium balloons while the local children hold onto him via string. "I’ve never had a kite," says Pilkington. I’m outraged! But also giggling.

Episode Two takes the pair to Mumbai, where Pilkington has been before. And while he dreads the curse of Montezuma (Shiva?) that brought him low last time, the two engage in some laughing yoga before shooting a Bollywood film (as you do). Of note: Karl Pilkington is a preternaturally good dancer.

They move on to Varanasi to see the sun rise over the river Ganges, and then it’s on to West Bengal where they join the circus and investigate a local celebrity (all while horribly offending every idea of political correctness.) As Pilkington puts it, humans have evolved to point and stare:

For now, we’re learning to love this off-beat and off-color romp around the world. An Idiot Abroad originally premiered on Britain’s Sky1 channel. In the United States, it is on Saturdays at 9 pm EST on Science Channel.