What to Know Before Going to Burma 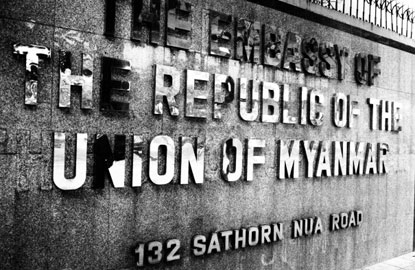 By Matt Goulding, Roads and Kingdoms

One of our favorite travel blogs is Roads and Kingdoms, where we find everything from notes on the backstory of the gin and tonic to talks with restaurant owners in Somalia and odes to hip hop’s unlikely popularity in Burma. Here, they’ve shared with us 17 of their hard-won lessons for traveling successfully in Burma.

1. There are no ATMs. In fact, there is no legitimate way to secure cash once in the country. Bring American dollars, big ones (the larger the bill, the better the exchange rate), and change them over at the Scott Market in Rangoon, where the rates are generous. Make sure they’re crisp; if they can’t break skin, they ain’t worth shit in Burma. Seriously: nearly every foreigner there is carrying around a bunch of worthless $20s and $100s they can’t use or exchange anywhere because of a single nick or crease. Go to a bank before you leave, get brand new bills.

2. Don’t expect to send photos or upload videos (or launch a website) from Burma. Internet does exist, but it runs at the same speed it did back when Al Gore invented it. Your best bet for doing anything other than watching the spinning wheel of death is to stay up late or get up early; Internet between midnight and sunrise seems to run about three times faster than it does during the waking hours.

3. Yes, those men are wearing skirts. They’re called longyi and they’re actually pretty damn cool. You might even have the urge to rock one by trip’s end, but do your best to resist. A non-Burmese man in a skirt just looks like a tool.

4. No, those women are not preparing for war. That makeup on their faces is called thanaka, and besides being an effective natural sun block (made from ground bark), it’s also a bit of a style statement. Pay attention to the different shapes—circles, stripes, swirls—women paint on their cheeks throughout the day.

5. Skip the free hotel breakfast. That was the piece of advice offered by legendary cookbook author and Burma trailblazer Naomi Duguid the first morning in our hotel and for it we owe her dearly. Even the dodgiest hotels will offer breakfast, and although it might be free sustenance, it’s a terrible waste of what may be Burma’s best meal of the day. Pull up a plastic stool at a teashop and order samosas, a plate of mohinga noodles, and a coffee with a twist of lime. It’ll set you back less than $2.

6. That smooching sound is not some dude making a pass at your girl. The international signs for flagging down a waiter—finger waves, chin nods, etc—carry little currency in this country. Instead, two short kisses are used to get someone’s attention. The trick is to make the sound via a thin stream of air passing through your lips, rather than from the lips themselves—a trick I never quite mastered, so my spirited attempts at authenticity invariably ended in me sounding like a pervert.

7. Those red stains you see everywhere—on street corners and in the cracks of sidewalks and stained to the grills of nearly every man the country over? They’re not blood, they’re betel juice. Betel nut is chewed throughout Southeast Asia, but in Burma it’s an indispensable part of the daily diet. Hard squares of betel nut are wrapped in betel leaves slicked with lye and laced with an Indian curry’s worth of spices—cardamom, fennel seed, star anise, rose powder, maybe even a touch of tobacco. For a mere 50 kyat (about six cents), you get a chance to fill the streets with your own personal burgundy stream, just like a local. With the texture of a two-by-four, it makes for a chew, but by the time the nut’s mildly narcotic juices start flowing and your head starts spinning, you won’t mind in the slightest.

8. Rise with the sun. The best hours of the day in Burma are from six to eight in the morning, when the light is soft, the heat gentle, and the naan bubbling hot from the tandoor ovens invariably firing in front of the city teashops.

9. "Where you from?" is the Burma’s unofficial way of greeting a foreigner. You could be racing down a country road on the back of a moped and rather than a wave or a simple "hello", a group of kids will shout "where you from?" as you go screaming by.

10. Skip the crab. Unless you see them pluck it directly from the Andaman Sea, it’s probably not worth the risk. There’s not enough chili paste in China to overpower the debilitating powers of a rancid crab (just ask Nathan). Refrigeration is spotty, so seafood is best consumed in the earlier hours of the day.

11. Hip-hop is king. Want to make friends? Study up on the scene. We found ourselves in numerous heated discussions about the three generations of Burmese rappers and the various alliances and beefs between them. Or better yet, bring some burned discs with the latest Odd Future or Quannum Projects mix tape to offer as a gift from the West.

12. Rehearse your China talking points. All of the locals we spoke with—old women, young monks, chatty cabbies—were eager to talk about China’s stranglehold on their country. Among the many accusations I heard leveled against the neighbors to the north: "heroin pushers," "jade thieves," and "silent colonialists."

13. English Premier League is serious business in Burma. Part of this, of course, is the lingering residue of British imperialism, but the more prosaic explanation for the EPL passion lies in the fact that most English soccer matches on the weekend take place midday (i.e. just after dinner time in Burma), meaning that by the time Wayne Rooney sets up for that bicycle blast, the Burmese spectators are on their third Dagon forty.

14. The only thing as fickle as the Internet in Burma is the power grid. Matters have apparently improved markedly in recent years; not long ago, power was only available for part of the day (in some rural parts of the country, scheduled blackouts may still be the rule). Still, don’t be surprised if you’re left groping in the dark.

15. The oil is there for a reason. I’ve heard lots of people complain about Burmese food being oily, but this isn’t the result of a nation of heavy-handed cooks; it’s a basic protective measure. With little reliable refrigeration, curries are cooked early and often kept throughout the day. The layer of oil shields against bacteria and spoilage, so be thankful it’s there.

16. Burma runs on its own time. Literally. It’s one of the few countries in the world to operate in a offset time zone. Burma is eleven and a half hours ahead of EST—a half-hour behind the majority of Southeast Asia.

17. It’s never been easier to go. We managed to secure visas in just under five hours in Bangkok with nothing more than a few passport photos, an application, and about $40 cash. Still, if you’re a journalist, better you dream up a new profession when filling out the section on job history. We went as caterers from New York, complete with our own business cards. (Slogan: Tri-Tip for the Tri State.) In Burma, you can never be too sure.

See more from Roads and Kingdoms’ series on Burma, like their Street Food Basics and Free Style on hip hop culture there.

Photo credits: Sunrise in Burma via Shutterstock; Embassy of the Republic of the Union of Myanmar courtesy of Roads and Kingdoms