Beaches Kaila Yu Do You Enjoy Visiting Hawaii? You Should Pay a Fee
Home  >  News   >   What to Do in Victoria This Summer

What to Do in Victoria This Summer

At the southern tip of Vancouver Island is a grand city of petite proportions, so popular that many tourists assume the entire Island is named after it. Enter Victoria, one of the most picturesque cities in Canada, wooing locals and visitors alike with its refreshing brew of beachfront living and historic urbanism. Turning 150 years "young" this year, there are tons of reasons to visit this summer—both for the celebrations and a dose of the easy-going island vibe—and we’ve distilled the list down to the top five. 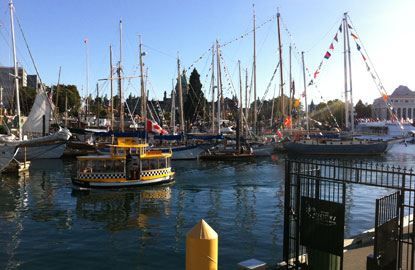 Since the late 1800s, Victoria’s inner harbor has been the place to be, and today, seaplanes, water taxis, yachts, and tall ships jockeying for position, carry on this tradition. Where else in the world can you watch the famous Water Ballet—think ice dancing on water—performed by a quintet of miniature harbor ferries gliding and spinning in sequence to the Blue Danube (Sundays during summer, 10:45 am), or grab a bite in your kayak at a ‘paddle-through’ window? As Victoria’s unofficial main attraction, there’s always something going on, be it a wooden boat festival or a fresh catch of whale watching boats causing a ripple-effect on the glassy bay. If you only have a few hours to tour the city, start here, as the inner harbor is the city’s heartbeat. 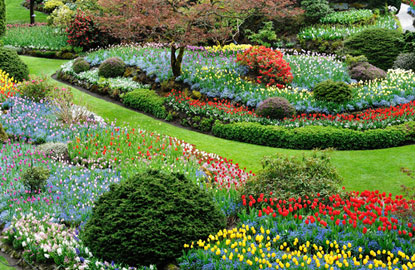 Celebrations will be going on all summer for Victoria’s 150th anniversary. On August 5th, don’t miss the Symphony Splash, when Victoria’s symphony orchestra performs in the inner harbor for a crowd of 40,000. For something less crowded but equally enchanting, visit The Butchart Gardens (pictured) for a stroll among 55 acres of flowers and Saturday night fireworks. Finally, creating a unique soundtrack for your stay, the International Buskers Festival (July 20-29) will turn Victoria’s streets into an urban theatre. And this is just the beginning, from the Chinatown Night Market to the Tango Festival, there’s something going on every day. 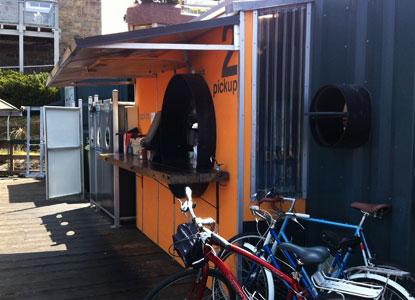 Southern Vancouver Island is often referred to as "Canada’s Provence" for its landscape and penchant for farm-to-table cuisine. As a seaside city, the capital of British Columbia also excels at reeling in ocean-to-table cuisine too. No substitutes here, Victoria is all about sustainable, fresh food—literally, the fish comes from the surrounding waters and the produce from local farms—and the restaurant scene confirms this. Take the eco-friendly Red Fish Blue Fish (pictured) positioned on the harbor’s wooden boardwalk. Operating out of a converted shipping container, the waterfront take-away serves up a fresh- catch daily. It’s so fresh that hour-long lines form even before they open at 11:30 am.

Just outside the city, also on the harbor, is Spinnaker’s Gastro Brewpub, the oldest licensed brewpub in Canada. Don’t let the casual vibe deter you, chef Ali Ryan is big on gourmet pub grub, hand-making mustard for her fresh-caught halibut with local pancetta-wrapped broad beans. Finally, don’t miss Fol Epi, a local bakery by the sea that grinds gains on-site for its loaves of artesian bread. 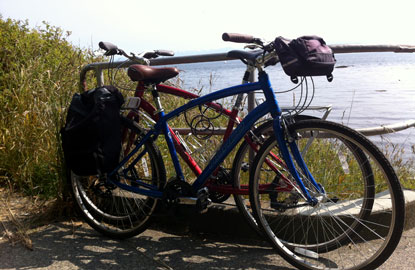 Victoria locals take a healthy lifestyle very seriously. Eating according to the 100-mile diet (before it even existed), and exercising daily are not a chore, but a way of life. This lifestyle, paired with a mildest climate and flat landscape, has made Victoria the cycling capital of Canada. Not to mention, the conversion of the former "Galloping Goose" railway into a 37-mile cycling and walking trail, and a seaside touring route, hasn’t hurt. Easily accessible from downtown, the bike routes can be conquered for one hour or an entire day with a bike rental from Cycle BC (just behind the Fairmont Empress). Everyone from Lance Armstrong wannabes to young families can "gallop" on two wheels under a canopy of trees, over wooden bridges, and through paved residential trails. 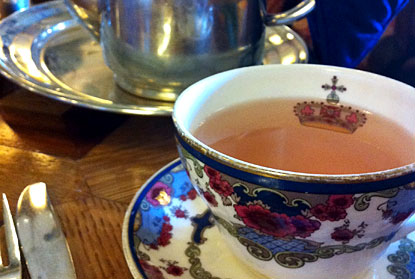 Famous for its prime piece of real estate fronting the inner harbor, the grand and historic Fairmont Empress is also the Canadian stop for afternoon tea. More than just teatime, Vancouver Island is steeped in far-flung infusions. The creator of Silk Road Tea has modernized Victoria’s tea tradition pairing it with ice cream, beer, cocktails, spa treatments, and beauty products. Notable concoctions can be found in the Rialto Cocktail, a blend of Victoria Gin and Lapsang Souchong tea at the Veneto Tapa Lounge or in Silk Road’s very own Philosopher’s Brew Sangria recipe, mixing herbal tea, fruit, and gewurztraminer.

Insider Tip: British Columbia’s capital city can be reached by seaplane from Vancouver or Seattle, or a combo of land and sea by car and ferry.

Want more tips on what to do in Victoria? Check out our Family Weekend Getaway in Victoria, British Columbia.

Thinking of a trip to Victoria?

For up-to-the-minute hotel and restaurant recommendations, plus the best planning advice, check out our Victoria Travel Guide.

Photo credits: Butchart Gardens via Shutterstock; All other photos courtesy of Trish Friesen.