A Perfect Day in Portland, Maine (On Foot, and With Your Dog) 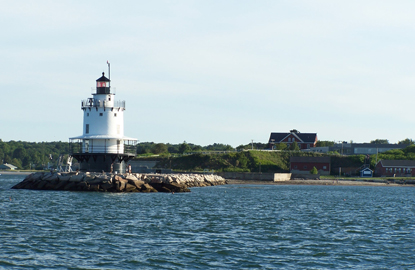 You’re in Portland, Maine for a full day, and of course you brought your dog, since Portland has several dog-friendly hotels to choose from, among them the Hampton Inn, the Portland Harbor Hotel, and the Inn at St. John. You’re planning to stay in town today: you’ll have time later to explore the rest of Maine.

It’s a beautiful morning when you emerge from the hotel. Walk your dog up Munjoy Hill for brunch al fresco at the Front Room, which opens at 8 am. Sit outside at one of the small tables looking down the street toward Casco Bay (pictured above), your dog lying at your feet. The charming wait staff will bring him or her a bowl of water, and they’ll serve you their well-cooked, local, fresh food; the whole menu is delicious.

After you pay the bill, stroll down to the magnificent Eastern Prom. Your dog can run off-leash on the East End beach only from Labor Day through Memorial Day, but during the summer, the Prom is still a great place for an on-leash walk. Make your way to the right, toward the Old Port. Stroll along Commercial Street and up through Portland’s quaint, charming shopping district, which is just above the Old Port. Longfellow Books is a great indie bookstore; be sure to stop in for a book or two. 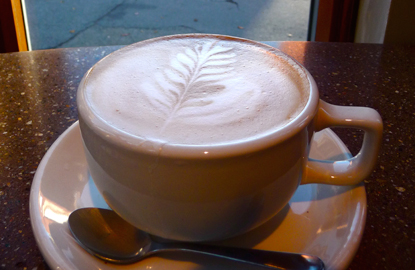 When you’re ready for a pick-me-up, get a cup of coffee or tea and a pastry at Bard Coffee or Arabica (pictured), then repair to a bench in the lovely, leafy little square on Exchange and Middle Streets called Tommy’s Park, where good musicians are usually busking.

It’s almost lunchtime. Walk down to the Browne Trading Company on Commercial Street for seafood salads, cheese and paté, fresh bread, smoked fish, and wine, before heading down the street to the Casco Bay ferry terminal. Buy your ticket, get in line, and board the Casco Bay mail boat, which departs daily at 10 am and 2:15 pm during the summer. The three-hour boat tour runs between 5 of the islands, dropping off mail and supplies. It’s a beautiful, low-key, and inexpensive way to see the Maine coast, and the crew is chatty and informative. It might be chilly out on the water, so bring a jacket. If it rains, you won’t get wet: there’s a roof. Plus, your dog will love the ocean breeze in his ears.

You’re ready for a short nap and/or a shower when you get back to land; your hotel isn’t far away. Once you’re refreshed and awake, and your dog is walked and fed, leave him tucked in his crate in the hotel room, and head out into the evening. 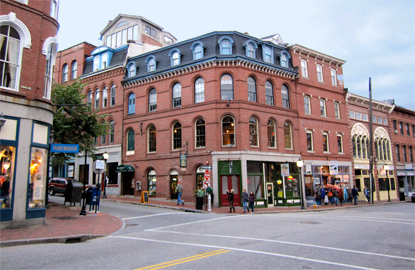 Portland is a small city, but it has so many good and even first-rate restaurants, it’s impossible to pick the best one. Street & Co. has impeccably fresh, beautiful seafood. Miyake has some of the best sushi anywhere. For down-home healthy food, nothing beats the Pepper Club. Grace is a serenely soaring former church turned bar: get the sliders. Petite Jacqueline makes the best steak frites in town. And for exceptional Ethiopian food, go to Asmara.

After dinner, if you’re in the mood for some live music, check out the night’s lineup at the Empire or Blue, both on Congress Street. If you’re up for a nightcap, go to Local 188 or LFK in Longfellow Square for a lively, friendly scene.

Kate Christensen is the author of five previous novels, including In the Drink, Jeremy Thrane, The Epicure’s Lament, and Trouble.  The Great Man won the 2008 PEN/Faulkner Award. She has written reviews and essays for numerous publications, most recently the New York Times Book Review, Bookforum, Tin House, and Elle. Her latest novel, The Astral, was released in June.