News Sorrel Moseley-Williams The New President of Chile Has Chosen a Very Unusual Place to Live
NewsWhat it’s Like: Christmas in Rome 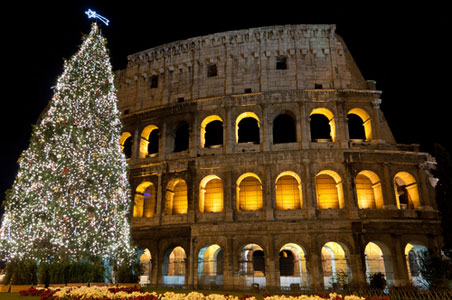 Christmas in Rome is a strikingly understated affair for a city so inextricably associated with Catholicism. Tasteful, one might say. There are the lights strung up between random streets, sometimes on the big, thoroughfares like Via Condotti and Via del Corso, and other times, tiny vicoletti whose street signs are obscured by construction awnings. During the day, the lights—usually tented garlands or hanging strings—are frosty white, like icicles, but at night, they glow in blues, golds, whites, and reds. By the time the temperature drops, roasted chestnut vendors can be found on every street corner manning florescent-lit hot pans. Nothing smells as much like Christmas in Rome as those fat, black, heat-cracked chestnuts. Nothing, that is, aside from the sweet tang of mandarins wafting throughout on the Metro, munched by harried commuters, or the buttery whiff of Panettone in bakeries.

This year, Christmas on Via Condotti is sponsored by Mercedes; the car company’s emblem dangling from all of the street’s glitzy white chandeliers and gracing the giant tree at the end of the street. Tourists stop for photos in front of that tree—clearly having mistaken it for the Rockefeller Plaza tree of Rome (wrong: the big ones are in St. Peter’s Square and at Piazza Venezia). The tree in Termini Station, however, is decorated by hand-written Christmas wishes.

In the shops, there are English Christmas carols piped through the sound system and modest decorations; mostly stars. There are the eavesdropped tail ends of cell phone conversations: Don’t worry about Paolo’s gift; it’s taken care of. What do you want to get Nonna Maria this year? No, no, she already has skis.

In Piazza Navona there is the Christmas fair, its crown jewel—the carousel—threatening to eclipse even Bernini’s fountain and Borromini’s church. Browse kiosks: load up on crepes with Nutella and cotton candy or buy handcrafted Nativity sets. By December 8th, nativity sets can be found in most of Rome’s churches, from grand to small, but after that date, the Immaculate Conception on the Roman Catholic calendar, nativities will crop up in homes as well; the baby Jesus a notable absentee until after December 25th. The Immaculate Conception is also when the Pope makes a special trip out of Vatican City to oversee the crowning of the Virgin Mary in the Piazza di Spagna. It’s a somber procession of black cars, a simple wreath of flowers, and a papal tradition that marks the official start of the Christmas season in Italy. That is, if the chestnuts and dripping garlands of street lights didn’t already get you in the mood.