News Sorrel Moseley-Williams The New President of Chile Has Chosen a Very Unusual Place to Live
NewsWhat it’s Like: Christmas in Osaka 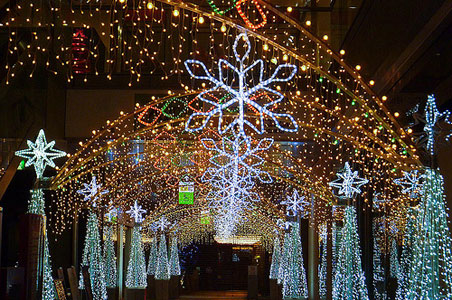 Japan is not a Christian nation but, inspired by feel-good Hollywood holiday movies, the Japanese do enjoy celebrating the "Kurissumassu" season. Japanese Christmas is a joyfully secular celebration of Santa, snowmen, and reindeer; of presents, candy, and a great big Christmas dinner. The day after Halloween, Japanese cities get into full-on Christmas mode. Lavish decorations can be enjoyed all over town; reindeer and Santa costumes can be bought in stores.

Osaka—Japan’s third-largest metropolis, known for its brash, fun-loving citizens—becomes a fairyland of lights. Shopping centers like Hep Five, Hoop, and Namba Parks have the monopoly on Kurissumassu displays, showcasing spectacular light-covered archways or complex mazes. The Umeda district hosts a German market which has been dedicated to replicating old European Yuletide charm for the past 20 years. There are "gingerbread house" kiosks and Christmas cookie booths; a train ride, a merry-go-round, and a giant tree that gives the Umeda Sky Building a run for its money. In Tennoji Parks—home to Osaka’s zoo—there is an illuminated zoo-themed Christmas village, full of rainbow-colored lights. Nakanoshima Island is the starting point for an uninterrupted series of lights snaking from the island all the way down Midosuji Avenue, one of Osaka’s toniest tree-lined shopping streets. 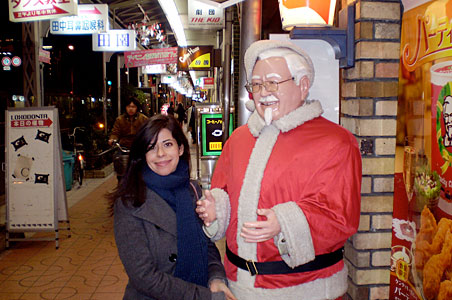 These are the 55 days of Osaka Kurissumassu, brought to you by Colonel Santa. The traditional Japanese Christmas dinner consists of "Western food," like spaghetti, hot dogs, hamburgers, or most commonly, the "KFC party meal." For around 5,000 yen, score a bucket of KFC, a side salad, and "Christmas cake". As soon as the last plastic Halloween pumpkin leaves the last store window, the Colonel Sanders statues flanking Japan’s KFC branches are dressed in Santa costumes: becoming the unofficial mascot for the Japanese holiday season. For Osaka, a city whose citizens believe Colonel Sanders has "cursed" their beloved baseball team, this is kind treatment. The Christmas spirit is clearly in the air.