News Sorrel Moseley-Williams The New President of Chile Has Chosen a Very Unusual Place to Live
NewsWhat it’s Like: Christmas in Barcelona 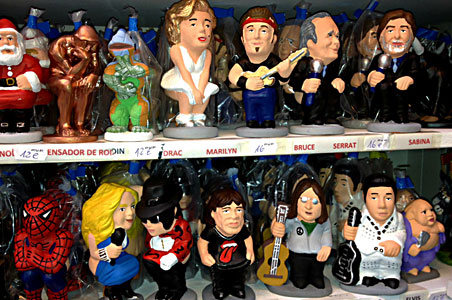 Barcelona, as does most of the rest of Spain, dresses up spectacularly for the holidays. Brilliant lights stretch high over streets and tumble, all-white, like waterfalls down hotel facades. Department store windows burst to life with festive displays, while stacks of turrónes, a tasty holiday treat, beckon from candy shops.

But visitors to this northwest region of Spain, Catalonia, this time of year are often shocked when they discover one of the most beloved—and, to outsiders at least, bizarre—holiday traditions: a small ceramic figure of a squatting man, pants dropped, going numero dos, usually in a Nativity scene.

This peculiar fellow is called a caganer—or, as my friend Rachel and I dubbed it on a recent trip to Barcelona, the Christmas Crapper. Caganers can be found in shops and holiday markets throughout Catalonia, including the festive Fira de Santa Llucia in front of the Barcelona Cathedral. The traditional figure is a squatting Catalan peasant man with white pants, a red hat, and a bare butt.

But caganers have now become so popular that actors, athletes, politicians, and even animated characters like the Smurfs are depicted dropping trou, complete with a coiled little offering behind them (and yes, the Smurfs’ stuff is blue). Barack Obama, whose figure boasts the words "Yes We Can," and the Pope are top sellers, and a standout caganer this year is pop singer and internet sensation PSY (though this is undoubtedly not what he means by Gangnam Style).

Theories abound about the origins and significance of the tradition: Some Catalans say it’s a symbol for the equality of all humans; others, that it invites luck and fertility for the New Year. At the very least, many agree it adds a bit of bathroom humor to the holiness of the Nativity scene.

And amazingly enough, the caganer isn’t the only Catalan Christmas tradition that involves the digestive system: there’s also Caga Tio, loosely translated as "the pooping log." I was less familiar with this merry little yule log, with its smiling face, twig arms, and red hat, so I asked our delightful guide, María Teresa, a native of Barcelona, to fill us in.

She balked at first—we were on a brand-new tour with distinguished operator Abercrombie & Kent, after all—but finally she relented, explaining how on Christmas morning, Catalan children hit a blanket-covered Caga Tio with a stick until it, well, "dumps" out a pile of presents, carefully placed by parents the night before. María Teresa even went as far as to belt out the accompanying song to us, amidst a flurry of shoppers. "I haven’t sung that song in years, and it just makes me feel like a kid again," she laughed.

Indeed, the holiday spirit can lurk in the most mysterious of places—and, at least in this part of the world, in the most basic of bodily functions.