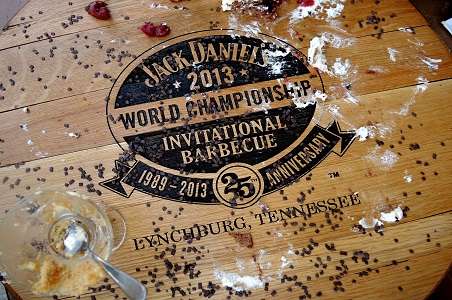 I raised my hand and read aloud to the room full of barbecue diehards:

I do solemnly swear to objectively and subjectively evaluate each barbeque meat that is presented to my eyes, my nose, my hands, and my palate. I accept my duty to be an Official KCBS Certified Judge, so that truth, justice, excellence in Barbeque, and the American Way of Life may be strengthened and preserved forever.

And with that I was ready to assume my duties at the Jack Daniel’s World Championship Invitational Barbecue, held last month in Lynchburg, Tennessee. A rather odd place to find myself as a former vegetarian lacking any real palate for whiskey—happily, last year I discovered that not only did I like the spirit, I don’t know how I’d made it this long without it! I would, however, have to forgo my trusty new friend during judging, as alcohol was forbidden. I also had to put away the cell phone, stash the sunglasses, and remain sequestered with the other judges under the watchful eye of still more barbecue fans lining the bleachers in front of us. And no expressions of rapture or disgust were permitted in front of the crowd. This was serious business. I was being schooled in the ways of barbecue. Here’s what I learned judging The Jack: 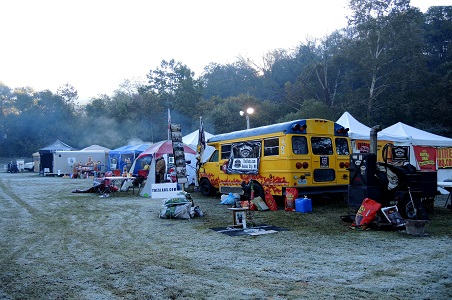 Just a sampling of each entry would total two pounds of meat. The hardest part, the 23-year judging veteran who sat next to me said, is to take it easy. Especially when the ribs arrive. A reverential silence fell over the judging pavilion when the ribs hit. Those succulent, fat-ribboned, smoky ribs. Sauces, chef’s choice, and chicken behind us, pulled pork, brisket, and dessert still ahead, only willpower stood between us and attacking those ribs. But it wouldn’t be fair to the competitors who labored over their brisket all night if I didn’t save room. I allowed myself two nibbles of each, and then tore through most of my favorite rib before I could stop myself. "I always break my rule on the ribs," my co-judge moaned to me later. Before I could slide into rib ecstasy, I slipped the remains into a Ziploc bag and stealthily texted my husband, "Come get ribs."

Judge Everything on Its Own Merits

The hardest part, the instructor told us in the prerequisite barbecue school, is to judge each piece of meat independently. "First piece is history, second piece is gone, judge that third piece on its own merits," he intoned. Don’t judge based on what should be there or your preconceived notions. In fact, he told our class, "Forget everything you think you know about barbecue."

Nobody needed to tell me to pay attention. But the ‘no cell phone’ rule took me out of my usual Instagram automation and freed me to concentrate on the task at hand—glorious barbecue. Talking to the other judges wasn’t permitted either, nor was leaving the table before we finished each round. And that’s only fair, when I think of how much labor and love went into the meat in front of me.