Hotels & Lodging Amy Fallon Quiet Hours, Curfews, and *Chores*? Why the Tide May Be Turning Against Airbnb
NewsA Stroll in the Piazza: 4 Italian Piazze You Must Not Miss

A Stroll in the Piazza: 4 Italian Piazze You Must Not Miss 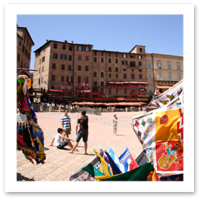 “What do you miss most about Italy?” I asked my first Italian teacher in San Francisco many years ago.

“La piazza,” she said so wistfully that I thought for a moment it might be someone’s name. After years of passing time in piazza, I now understand her fondness for these very special places.

The piazza is an Italian’s second home, although it also can double as a shopping mall, day care center, reading room, catwalk, singles club, casino, theatre, sanctuary, office, stadium and dance floor. Nor does the piazza discriminate. Everyone, regardless of gender, age, economics or social class, is welcome—including tourists.

If you want a deeper sense of how Italians live, find a comfortable spot on a pretty piazza (not all are) and just wait. Or engage in another Italian pastime: strolling le vie di mezzo (the streets in the middle) that lead from one piazza to another. You never know what delights you may find along the way.

Confessions of a Piazzalina (piazza lounger)

La piazza has been the setting for some of my most memorable moments in Italy. Yet I didn’t really “get” what a piazza is really all about until we were making our usual morning shopping rounds in Orbetello, a charming village set amid the lagoons of Monte Argentario in western Tuscany. The local wine merchant appeared in the piazza with a new go-cart for his four-year-old grandson. Within minutes, dozens of townspeople clustered around him. Several nonni (grandfathers), laughing like school boys, took rides themselves. Others inspected and praised the spiffy three-wheeler. Passersby paused to cheer as the boy finally pedaled his way around the square. It may take a village to raise a youngster in other places, but in Italy it takes a piazza.

This open-air museum may boast more capolavori (masterpieces) per square foot than any other Italian piazza. I like to imagine it in the Italian Renaissance, when Il Magnifico, Lorenzo de’Medici, filled the piazza with masquerades, revels, pageants and processions. “If ever history could be happy, it was then,” wrote one historian.

Darker times came in the final decade of the 1400s, when Florence fell under the sway of the fanatic friar Girolamo Savonarola. His followers, derided as piagnoni (snivelers), dragged priceless paintings, fine gowns, furniture, jewelry and musical instruments into this piazza and set them ablaze in the infamous “bonfires of the vanities.” In 1498 Savonarola’s opponents, known as the Arrabbiati (the angry ones), hanged the mad-eyed monk as a heretic and cremated his body in a giant bonfire that burned for hours on the same site (now marked by a plaque) where he had incinerated the works of others.

Just to the right of the Neptune fountain, which Florentines derisively called “Biancone” (Big Whitey), is a long, raised platform fronting the Palazzo Vecchio. On this arringheria aggrieved citizens aired their complaints and inveighed against their enemies to whomever would listen, adding to the piazza’s legacy to the world the root of the English word “harangue.”

Originally this was the site of the Circo Agonale, the stadium where the first century Roman emperor Domitian staged agones or games. Over the centuries its name evolved into “in agone” then “n’agone” then “navone” and finally “navona.” Among the remarkable sights this piazza has witnessed was the execution of a young Christian girl named Agnese. The Romans tore off her clothes as they dragged the virgin to her death, but her hair grew so miraculously long and thick that it completely covered her body.

From 1652 to 1866, the piazza, which hosted theatrical shows and horse races, was flooded on August weekends for elaborate nautical feats. Three fountains keep alive the piazza’s aquatic history. Most famous is La Fontana dei Fiumi (fountain of the rivers), with four giant statues representing rivers in the four quarters of the world: the Nile, the Danube, the Ganges, and the Rio della Plata. Look for the fountain and Piazza Navona in cameo roles in Ron Howard’s upcoming film based on Dan Brown’s thriller Angels and Demons.

“Il Campo” (the field), as the natives call it, was a marketplace established on a gently sloping hillside where three settlements coalesced to form Siena. The nine lanes of cobblestones that fan out from the mouth of the gavinone (central water drain) represented the Noveschi (the nine), the governors who ruled the Sienese republic at the peak of its power in the early fourteenth century.

Napoleon described this timeless piazza as “the finest drawing room in Europe.” But what drawing room floods in winter, houses two elegant cafes (Florian and Quadri), and provides haven for scores of pigeons?

As grand as the piazza proper is, I am partial to the smaller Piazzetta San Marco, between the Doge’s Palace and Biblioteca Marciana, which opens to the lagoon at the mouth of the Grand Canal.

Venice’s protectors—the lion of San Marco and San Teodoro of Amasea, whom the Venetians call “San Todaro”—stand guard atop their pedestals. When there were no official guests in the city, gambling was permitted in the space between the columns. This may be one reason why the phrase “fare il Veneziano” (make like a Venetian) has come to mean acting like you don’t know the rules so you can do whatever you like.

The Piazza in Italian Etymology

It’s no wonder that piazza has carved a place for itself in the Italian lexicon. Here are some interesting phrases to listen for when you travel.

“mettere in piazza pubblica”
Someone who expresses private feelings in public puts them “in piazza.”

“fare una piazzata”
To “to make a street row or squabble.”

“fare piazza pulita”
If thieves steal everything in your house, they “clean the piazza.”

“scendere in piazza”
Protesters who take to the streets “descend or go down into the piazza.”

“andare in piazza”
When a man starts to go bald, friends may tease him about “going to a flat open space.”

“letto a una piazza or a letto a due piazze”
When you check into a hotel, you can request a one-piazza bed or a two-piazza bed (a single or a double bed).

Dianne Hales spent considerable time in Rome studying Italian and doing research for her new book, La Bella Lingua: My Love Affair with Italian, the World’s Most Enchanting Language, which will be published by Broadway Books on May 12. You can find out more at becomingitalian.com.