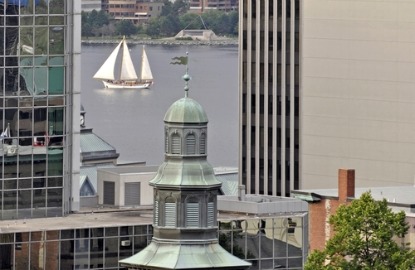 Nova Scotia’s capital is a hip, harbor-hugging city and its 400,000 citizens know how to have some serious fun. But Halifax has a past that’s been touched by tragedy, too: Most famously so in April 1912, when the RMS Titanic went down in the North Atlantic Ocean. Being the closest major port to the site of the capsized ship, Halifax became the base for recovery operations, and international attention focused on the city as wreckage and remains filtered through.

In this centennial year, the spotlight is being switched on again in Halifax as Titanic aficionados—from near, far, from wherever they are—flock in. Here’s the how-to for a perfect (and poignant) weekend escape.

Start by boning through the backstory at the Maritime Museum of the Atlantic, which houses a stellar collection of Titanic artifacts, ranging from a tear-inducing pair of baby shoes to one of the liner’s only intact deckchairs. From April 12 through October 31, it also hosts an exhibit highlighting two local ships that participated in the recovery process—and returned home with 205 bodies. Through June, another display is devoted to photos of grave markers erected for the 150 victims buried here.

To properly pay your respects, visit the Fairview Lawn Cemetery, the final resting place for 121 of the Titanic’s victims. Their simple granite headstones aren’t hard to find: Just follow the well-trodden path—or scan the grassy site for a curious pile of tchotchkes that fans of James Cameron’s film occasionally leave at the one honoring 23-year-old J. Dawson, an onboard coal trimmer.

Both the museum and cemetery factor prominently in special anniversary events, too. On the evening of Saturday, April 14, a candlelit public procession begins at the museum and winds up to the Grand Parade (a colonial military site) for a music-filled commemorative program. After a moment’s silence at 12:20am (the time Titanic started going down), flares will go off to symbolize her distress calls. The next afternoon a memorial service takes place at Fairview Lawn.

A boatload of other themed events is slated for April, as well: Concerts, lectures, tours, theatrical performances—like Celine Dion’s heart, the list goes on. Visit www.destinationhalifax.com for details.

The Halliburton, a trio of 200-year-old townhouses near the harbor, is the top choice. Its boutique rooms mix period furnishings with 21st-century perks. All 29 have fluffy duvets and some have fireplaces, making this ideal on chilly spring nights.

Alternately, book a room at the Lord Nelson. Built in 1928, this landmark facing the city’s gorgeous Public Gardens postdates Titanic, but still has plenty of gilded, grande dame appeal.

For true Titanic cred, no restaurant rivals Five Fishermen, across from the Grand Parade. Part of its splurge-worthy dining room was once Snow’s Funeral Home, where wealthy passengers—including John Jacob Aster—were "laid out." Today, wine bottles line the rope-pulled elevator, which brought bodies up, while the original embalming area has morphed into a room for private parties. Throughout April, the eatery offers a $46-prix fixe menu featuring dishes served at Titanic’s last supper (like salmon mousseline and Waldorf pudding).

For a quick nosh right on the water, try the Seaport Farmers’ Market. The architecturally striking venue sells finger food plus takeaway treats. Look outside for the statue of Halifax-born shipping magnate Samuel Cunard: His line’s Carpathia, the first vessel to reach Titanic, rescued some 700 passengers.

Thinking of a trip to Halifax?

For up-to-the-minute hotel and restaurant recommendations, plus the best planning advice, check out our online Halifax Travel Guide.