News Apeksha Bhateja Have $340,000 and Want to Vacation in a Survivalist's Paradise?
NewsWatch a Total Solar Eclipse on a Fred Olsen Cruise in 2015 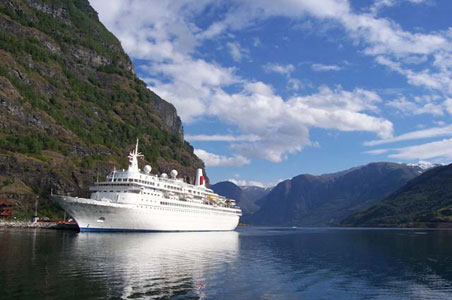 If you’ve ever wanted to see something extraordinary while cruising, this is your perfect trip. Fred Olsen Cruise Lines just announced the itinerary of Voyage D1504—embarking Southampton, UK on March 9, 2015—that has been dubbed the “Solar Eclipse Cruise.” The most interesting aspect of the voyage will be your chance to view a rare total solar eclipse. That’s when the moon travels between the earth and the sun and lines up in the perfect position to totally block all direct sunlight. For all intents and purposes, day becomes night for a few brief moments. It’s an awesome sight, but there’s a catch. You must be within a narrow band called the "Path of Totality"—typically covering less than 1 percent of the earth’s surface—in order to see the eclipse at all.

It just so happens that Fred Olsen’s 880-passenger Boudicca will be perfectly positioned off Denmark’s Faroe Islands to view the eclipse on March 20, 2015. These rugged, rocky, and wind-swept islands are about halfway between Norway and Iceland between the Norwegian Sea and North Atlantic Ocean. This truly is an out of the way spot and with limited light pollution, it will be an excellent spot from which to view the eclipse.

The 15-night voyage embarks from Southampton on March 9, 2015, and then calls on the Norwegian ports of Alesund (where there’s terrific bird watching and fishing), Tromso (inside the Arctic Circle), Alta (where you can tour the Sorrisniva Igloo Hotel that’s made of snow and ice), and Leknes (home of a reconstructed Viking longhouse) before gearing up for the eclipse during a sea day. The final port of call is Runavik, one of the Faroe Islands. The ship returns to Southampton on March 24.

Boudicca is an intimate ship that caters to hundreds of passengers instead of the thousands aboard mega cruise liners. This makes her the ideal vessel for a sightseeing voyage to witness a total solar eclipse. You won’t be fighting for a spot on deck; there will be room for everyone to enjoy the spectacle. Onboard there are three swimming pools and two Jacuzzis. The Atlantis spa—with its sauna and steam rooms—is a highlight as is the fitness center and salon. Four restaurants plus a pool grill and several lounges round out the ship’s offerings. The Solar Eclipse Cruise is on sale now starting at $2,665 per passenger.