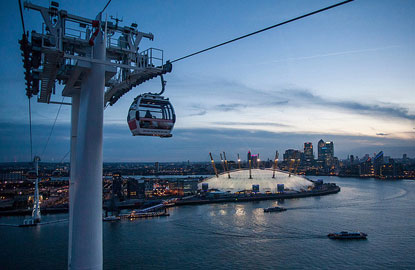 This little cable car may not take you halfway to the stars, but it will take you high above the Thames, offering sweeping vistas up and down the river.

The first aerial river crossing to hit London, the Air Line—or, to give it its official name, the Emirates Air Line, thanks to the Dubai-based carrier’s ten-year sponsorship deal with Transport for London—takes passengers on a 5-10 minute journey between the North Greenwich Peninsula and the Royal Victoria docks on the river’s north side.

Up to 34 windowed cabins each seating 10 passengers travel in a continuous loop, slowing down at either end for hop-on, hop-off access, just like a ski lift. At peak times, the cabins leave every 30 seconds, which means they can carry 2500 passengers an hour in each direction. One-way tickets are £3.20 with an Oystercard, £4.30 without.

The Emirates influence is apparent in the use of smartly uniformed stewards who assist with boarding and debarking, as well as en route recorded announcements like "enjoy the flight" and "we have reached our cruising altitude" (295 feet).

Launched at the end of June, the system got a real workout during the Olympics, carrying up to 22,000 people a day as a link between two venues: The O2 Centre (the former Millennium Dome) on the Greenwich peninsula, the site of gymnastics and basketball events; and the Excel Centre near the Royal Victoria dock, which played host to the weightlifting, wrestling, and boxing (plus ping-pong) competitions.

EAL travel between both venues during the current Paralympics is expected to be similarly busy. However, ordinarily passenger numbers hover around a more serene 8,000 a day, and you will probably have plenty of room in your cabin.

Like the London Eye, the EAL is more about sightseeing than utility. Most tourists never get further east than Canary Wharf, so the cable car gives some idea of just how vast east London is, with unusual views past the Olympic Park and the Thames barrier towards Tilbury, where the sky opens up and the river widens as it approaches the North Sea. Meanwhile, you can see familiar landmarks like St. Paul’s Cathedral and The Gherkin to the West.

Once on the ground in North Greenwich, a 15 minute walk to Greenwich itself takes you to two architectural masterpieces: Christopher Wren and Nicholas Hawkmoor’s beautiful English Baroque Old Royal Naval College and Inigo Jones’s fine Queen’s House, the first Palladian building in England. Also worth seeing are the Cutty Sark, a restored 19th Century tea clipper, and The Royal Observatory, home of the Greenwich meridian. The Observatory is set in Greenwich Park, recently the venue for the Olympic equestrian events.

At this point you might want to repair to one of Greenwich’s many restaurants or cafés for sustenance (there’s a nice café overlooking the park in the Observatory.) Alternatively, if you haven’t had enough of heights, you can tackle a 90-minute climb up the roof of the O2 via its new walkway for yet more spectacular 360-degree views.

Want more London? Check out the best new French brasserie to open across the pond: Brasserie Zedel. And get a preview of the city’s new Ampersand Hotel.

Photos courtesy of Transport for London