News Nicole Brewer The Dating (Mis)Adventures of a Single Black Woman in the Middle East
Home  >  News   >   Virginia is for Oysters: Kayaking, Wine, and Oysters in the Eastern Shore

Virginia is for Oysters: Kayaking, Wine, and Oysters in the Eastern Shore

I stood with a shucking knife in one hand and an oyster in another, about to crack open one of the great pleasures of Virginia. After a couple clumsy stabs at the shell, I successfully nudged the oyster open, peeling back its lid to reveal the meat beneath. It was still cold from the river. I slurped the briny bivalve down, pausing for a couple good chews to bring out the flavor. I tossed the shell aside, immediately ready for another. 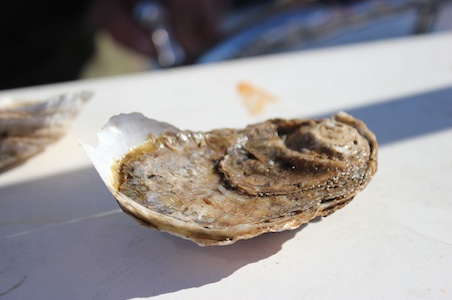 This oyster shucking extravaganza took place at Chatham Vineyards, a winery and historic farm located on Virginia’s remote Eastern Shore, tucked between the Atlantic Ocean and the Chesapeake Bay. It’s the final stop on the only kayaking and winery tour in the state of Virginia, an introduction to all of the region’s sensory pleasures: its sounds, scents, and flavors.

My love of salty, unadorned raw oysters prompted a visit to Virginia’s Eastern Shore where I learned about how oysters are raised and tasted them plucked straight from local waters. As it turns out, Virginia may be on track to become the oyster capital of the East Coast; it’s home to seven distinct oyster regions, their plump denizens popping up on menus across New York City.

This mission planted me in the seat of a kayak, paddling along the peaceful Nassawadox Creek. Accompanied by an eco-tour guide from Southeast Expeditions , my small group set out for a day of kayaking, wine tasting, and oyster slurping. The November day was warm, and the rich blue hue of the creek matched the expanse of cloudless sky. We didn’t encounter a soul during the journey—except an oyster farmer or two checking on his “crop.”

We paddled over oyster beds, pausing to peer down at cages full of maturing bivalves. The clean, clear waters flow through the cages and the oysters themselves, infusing their meat with delicate nuances unique to this very section of the Eastern Shore. One of the local oyster farmers, Tom Gallivan of Shooting Point Oyster Company, described his oysters, called Nassawadox Salts, like one might a fine wine. They have a “salty sweetness with the slightest mineral hints and a clean finish.”

An easy one–hour paddle later our group arrived at Chatham Vineyards. We sailed up to a dock stretching into the creek, complete with two Adirondack chairs facing the water. This farm has deep historic roots, including a striking Federal–period home dating back to 1818. We strolled past orderly rows of Chardonnay, Merlot, Cabernet Franc, and Cabernet Sauvignon vines to the tasting room.

The tour includes one bottle of wine per couple, and some secrets behind Virginia winemaking and about how each year’s weather influences the vintage. On Sundays, Chatham Vineyards also offers a special extra: an oyster tasting. Chatham’s steel–fermented Chardonnay is the perfect match for the briny oysters. The acidity and brightness of this un–oaked Chardonnay allows the terroir to shine through.

After exploring the winery, we headed back to the water for a (slightly giddy) return paddle. The delights of Virginia’s Eastern Shore—its wines, oysters, seaside villages, and peaceful creeks—had all come together in a single afternoon, revealing the region’s real character. Gliding over oyster cages in the seat of a kayak exposed all the subtleties that locals love—and might be willing to share.

Insider Tip: Each year Chatham Vineyards hosts an event focused on pairing local oysters and wines. “Terroir and Merroir” took place on November 10, 2012 and featured a tasting of six oysters alongside a vertical tasting (2009, 2010, and 2011) of their steel-fermented Chardonnay, followed by a traditional Eastern Shore oyster roast and clam steam dinner. It’s an annual event worth traveling for.

Freelance writer Jessica Colley covers cuisine, culture, the arts, and experiential travel. She is currently based in New York City and called Dublin, Ireland home for several years. You can follow her on Twitter @jessicacolley or check out her “Writer in the Kitchen” series on her blog The Great American Travel Dream.