Coronavirus Leila Najafi Want to Stay in Costa Rica for Over a Year? A New Law Might Help You
Home  >  News   >   Vienna, with a Modern Twist

Vienna, with a Modern Twist

Oh, Vienna. That grand Austrian city of imperial palaces, traditional coffee houses, and swirling waltzes. Who doesn’t want to visit its past and play Mozart-for-a-day? But as rich as it is to relive those gilded times, Vienna is a living city, and the best parts are when that historic past gets muddled with a dose of modern life in a potent cocktail that’s very much Viennese. 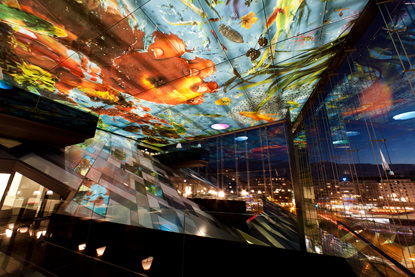 Skip the chandeliers-and-red-velvet opulence of the typical first district hotel. If you come to the stark Sofitel, you’ll be treated to something they can’t offer—a view over the city center. Opened in 2010 on the edge of the second district, this hotel doesn’t have the same building restrictions, so it towers over nearby properties. It’s the most scenic on the top-floor restaurant Le Loft, where breakfast is served up along with the entire city skyline through a sweeping bank of windows. A minimalist color palate of gray, white, and black, is a wink to the towering St. Stephen’s Cathedral to the south. At night, a ceiling art installation by Pipilotti Rist (pictured, above) acts as a vivid, colorful beacon across the Danube Canal. Thankfully, the rooms are every bit as sensational as the public spaces. They benefit from the same outstanding views, plus deep tubs and beds of extreme fluffiness. See full Sofitel Vienna Stephansom review.

The portrait in the dining room says it all: looming over an entire wall is a reproduction of Empress Maria Theresa. But note, there’s something off—her eyes have been replaced with a photograph of the owner’s eyes. It’s both grand and cheeky, which suits the Ein Wiener Salon. The mood here is more supper club than restaurant, and actually, that’s how the Salon began. In the intimate 12-table dining room, you’ll have a direct sightline to the open kitchen and the chef’s slumbering dogs in back, but the service and Louis XV chairs radiate elegance. The chef applies his Italian background to Austria’s bounty, and the result elevates traditional dishes with bright flavors. Seasonal dishes vary, but they could include morel and asparagus soup or Wooly pig filet with beechnut oil. Naturally, all are paired with crisp Austrian wine. Tyrolean cheese makes a fine ending to the meal. See full Ein Wiener Salon review. 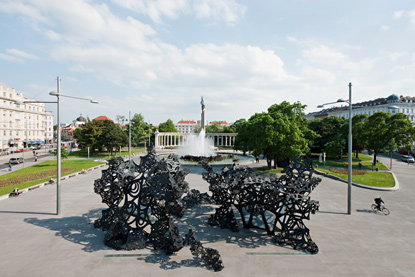 The charm of Vienna is that every bend is chockablock with architectural eye candy: swirling Art Deco gates or buoyant Rococo trim. Your urge is to block out modern additions as they intrude on your postcard view. But on the rotary of Schwarzenbergplatz, stands a new development that demands to stay in the picture. Rising up in a traffic circle around various grand embassies is the contemporary art piece, The Morning Line, a soaring structure of black coated aluminum. Made of modular pieces of curlieques linked in various sizes, it expands 10 meters high and 20 meters long. Like a dark coral reef, the pattern geometrically builds into shadowy branches that frame the boulevard’s historic buildings, a juxtaposition that makes both all the more vivid. Artist Matthew Ritchie brought the piece to Vienna supported by an arts foundation headed by Francesca von Habsburg, proof that the Habsburg name continues to influence Vienna’s landscape in bright new ways. Tip: Visit before November, when the traveling installation moves to a new city.

Off a little cobblestone lane, you’ll find Lena Hoschek’s boutique, a pink-poodle girlie enclave. The clothes here are a pin-up’s paradise, with 1950’s style wasp waists, circle skirts, and cheerful prints. But the local designer stays true to her roots; among the racks is a modern take on the dirndl (that traditional Alpine bodice-blouse-apron combo). It’s somewhat in the style of Maria von Trapp, if Ms. von Trapp also wore fishnets and made a mean martini. It’s an outfit you could wear spinning on the hilltops of Technicolor Austria, but you’d also look perfectly appropriate swinging from a strap on the U-Bahn. See Lena Hoschek review.