Coronavirus David Silverberg Are Your Kids Heading Back to Summer Camp? Here's What You Need to Know
Home  >  News   >   What It’s (Really) Like: Venice’s Acqua Alta 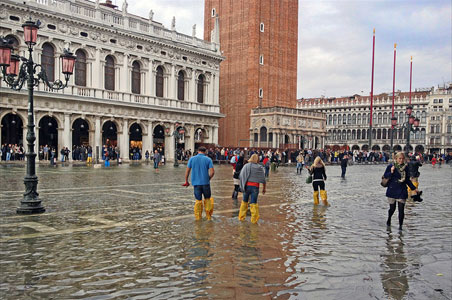 In October and November of 2012, Venice has undergone a severe and extended bout of acqua alta, the periodic flooding that afflicts one of the most beautiful and artistically significant cities. International media has reported the problem widely, publishing images of tourists bathing in Piazza San Marco and Venetians trudging through flooded streets. Much of this reporting, however, has been misleading, and especially in the context of the almost simultaneous tragic flooding along the east coast of the US, has made many who plan to visit Venice anxious. While both the flooding after hurricane Sandy and the Venetian acqua alta, are most likely affected by global warming and present serious long term problems, they are very different phenomena. The possibility of acqua alta need not cast a cloud over your plans for a Venetian vacation.

Acqua alta is a natural phenomenon that has occurred for centuries when especially high tides caused by the moon’s gravitational pull coincide with a strong scirocco, a warm wind blowing across the Mediterranean that forces water from the Adriatic into the Venetian lagoon. This coincidence happens from about the middle of October to the beginning of December. The chance of acqua alta outside this period is extremely rare, and if flooding does occur, it is mild and restricted to Piazza San Marco, the lowest point in the city.

While global warming seems to have increased the frequency and intensity, it has not caused flooding outside this period. So, if you plan a visit to Venice any other time of year, you don’t even need to consider the possibility of acqua alta dampening (get it?) your holiday.

But even if you do get caught in Venice during acqua alta, it is not like other floods. Since it is a tidal phenomenon, it lasts three to four hours, during high tide. So, if you wait a while (have a drink perhaps), the water will drain away, and you can go back to getting lost along the canals. The water may last a bit longer if there is a particularly strong scirocco, as has been the case this year, but rest assured the water will drain away as soon as the incidence of low tide, which happens every six hours, takes effect.

Also, since acqua alta depends upon a confluence of weather and tides, it is, to a very great extent, predictable at least a couple of days before it happens. The municipality runs a service notifying residents of the potential danger.

Those who love Venice are, of course, concerned with the damaging effects of this periodic flooding, both on the artistic monuments and the life of the city in general. Since the flooding has been occurring for centuries, it has been built into the life of the city; electrical and telephone lines are watertight, and unlike the situation on the east coast in the US, Venetians don’t put the boilers to their heating systems on the ground floor. (We, of course, don’t have underground cellars in Venice!)

Museums and other cultural institutions have long since stored their artistic treasures well above the high water marks, so the direct damage to Venice’s cultural monuments is minimal. The foundations and first floors of most architectural monuments are more damaged by the underwater vibrations caused by the mammoth cruise ships than they are by the high tides.

Nevertheless, the high water, especially since the rising sea levels as a result of global warming, does exert a toll. Many residences whose ground floors were a few steps higher than street level, and were formerly immune to flooding, have now been flooded or are in danger of it. This danger does not mean that the effected floors of such buildings will become unusable, but preserving them from flooding through underground flood chambers (vasche) and pumps is expensive.

The Italian government has allocated funds for the construction of movable dykes at the entrances to the lagoon that can be raised temporarily when acqua alta threatens. They were supposed to be finished by 2012, but budget shortfalls have now delayed finishing the project until 2016. It is hoped that these dykes will do much to alleviate the problem.

There has been some concern they will temporarily interrupt the flow of water from the Adriatic, will disturb the ecological balance in the lagoon. This is a serious consideration, since much of Venice does not have a sewage system, and depends upon the strong and radical tides to cleanse the waters of the Venetian canals. Even an occasional interruption of this flow for a few hours may have a deleterious effect. However, Venetians have become so desperate by the increasing frequency of the interruption of their lives and businesses caused by rising sea levels and flooding, that objections to the dykes seems to have diminished substantially. It’s hoped, in fact, that the severity of the recent flooding will urge officials to speed the funds from the central government to allow a quicker completion of the movable dykes.