Imagine if thousands of foodies, 50 celebrity chefs, and a reserve list of the US’s best sommeliers descended upon Vegas at once, mingling, clinking, and dining together under one glittering sky. Then factor in the delicious editors and contributors of the recently revamped epicurean magazine (read: Bible), Bon Appetit, hosting and curating events, and you’ve got a gourmand gathering in epic Vegas-style. Welcome to Vegas Uncork’d (May 10- 13, 2012). Food and drinks are best shared with others, so here’s a sampling of what this year’s line-up was like, complete with insider tips for your next trip. 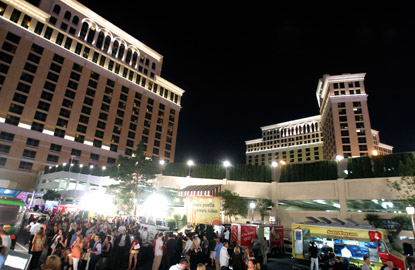 Insider Tip: Venture off the strip to sample locals’ favorite food picks at prices that won’t break the bank. Most food trucks have regular schedules, while others change it up; all tweet their location. 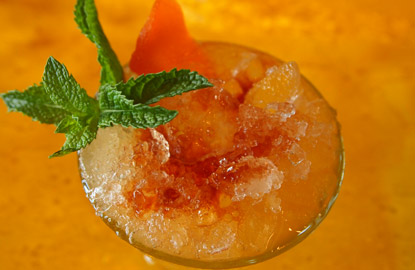 Overlooking the Bellagio’s swaying fountains at Hyde Lounge, a sold-out crowd of cocktail devotees started to follow the motion of the fountains as they sipped concoctions from 10 local bartenders and selected the crowd favorite at the Mix-Off. Later that evening Gordon Ramsay, Nobu, and 48 other award-winning chefs mingled with a pack of 2,500 at the weekend’s biggest draw, the Grand Tasting. Showcasing over 100 international wines and sought-after dishes from the Glitter Gulch’s gourmet scene, Caesar’s Garden of the Gods Pool Oasis was transformed into a moveable feast—like the foodie version of Coachella, but with Armani suits and Louboutins. 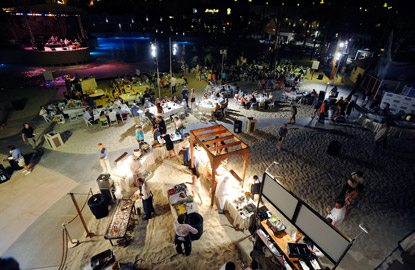 Saturday was all about Cabernet and a Clambake. The second of the weekend’s two wine seminars paid homage to Vegas’ top-selling wine: Cabernet Sauvignon. Led by Bon Appetit contributing wine editor and Master Sommelier David Lynch, a panel of California’s kings of Cabernet, and the Bellagio’s Director of Wine, the crowd swirled, sipped, and studied eight cabs with one simple instruction: "This is Vegas, there are no spittoons here, so drink up!"

Over at the Mandalay Bay, Saturday ended with a splash on the sandy shores of the surfside pool. Barefoot dining and beach dancing were in full effect as chefs dished up Baja ceviche cones and gastronomes ate by candlelight and driftwood.

Insider Tip: Jason Smith, the Bellagio’s Director of Wine and Master Sommelier, is responsible for 17 sommeliers and a 90,000-bottle cellar, so make sure to chat with him (or one of his underlings) for a classy, wine-soaked start to a night on the Strip.

What to Know for Next Year:

1. 2012 marked the sixth year of Vegas Uncork’d. Dates have not been set for 2013, but plan ahead for around Mother’s Day weekend.

2. Tickets can be purchased as singles or as a VIP package.

3. Participating hotels are Mandalay Bay, The Cosmopolitan, Bellagio, and Caesars Palace. Use your ideal event schedule to help determine the most fitting hotel. Word to the wise: just getting from your hotel room to the cab stand can take up to 10 minutes of walking, so do bring comfortable shoes.

4. Choose from eight events per day, running Thursday to Sunday. For the full lineup of this year’s events (and thus a taste of what next year might look like), check out the Uncork’d event schedule.

5. If you choose to attend multiple events, you’ll be filled to the brim with Vegas’ best food and wine. Balance all the indulgence with simple breakfasts and plenty of walking along the Strip.

For up-to-the-minute hotel and restaurant recommendations, as well as the best planning advice, check out our Las Vegas Travel Guide.

Photo credits: The Mix Off and Grand Tasting courtesy of Trish Friesen; Follow That Food Truck and Clambake via Isaac Brekken/Bon Appetit