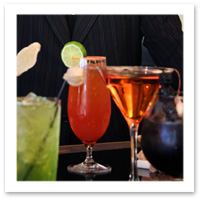 In Las Vegas, where anyone at a blackjack table or slot machine is entitled to free drinks, the beverage gun used to be a bartender’s best friend. Not anymore. The recent move toward upscale restaurants and lounges has prompted the rise of mixology — the art and science of the cocktail. Here’s where you can sample the best of the trend.

If you passed on the soufflé after dinner, order the Carrot Cake Martini at Noir Bar, a new, ultra-swanky lounge next to the LAX nightclub in the Luxor. Complete with raisins, fresh carrot shavings, a lump of brown sugar, freshly ground nutmeg, and a cream cheese frosting-rimmed martini glass, the cocktail is quite literally dessert in a glass.

“I wanted something that combined sweetness and sophistication,” says Hall, who interviews every patron so he can customize individual drinks. “The first time people hear about it, they say, ‘Carrot cake? In a drink?’ When they try it, even if they don’t like it, they admit it’s like nothing they’ve ever had before.”

Equally delectable is the Spicy Brown Girl, a cocktail made with Horchata, a spiced rice milk usually found in Mexico. Niles Peacock, the mixologist at Stir Lounge in the off-Strip Platinum Hotel & Spa, developed the libation for the wedding of Brent Hammer, the hotel’s executive chef. The drink was so popular that Peacock added it to his regular menu. He named it (lovingly) in honor of Hammer’s wife, Carla, who is Mexican.

“Between the refreshing Horchata and the vanilla flavors, the first sip of this drink soothes your throat,” Peacock says. “Then the Ancho chile hits you and creates this wonderful warming sensation in your mouth.”

Muddling returned to fashion when mojitos made a comeback earlier this decade, and at Boa, a restaurant and bar in the Forum Shops at Caesars Palace, bartenders employ this technique to make the Blackberry Smash, a punch-like blend of fresh blackberries, spearmint, lemon, Belvedere Citrus Vodka, and Marie Broussard Parfait Amour liqueur.

The drink is the brainchild of Tony Abou-Ganim, one of the first professional mixologists to arrive in Vegas for the opening of the Bellagio back in 1998. Boa hired Abou-Ganim to create one of his signature cocktails, all of which incorporate fresh fruits, fresh herbs, and top-shelf premium spirits and liqueurs.

“For me, if you have quality ingredients, everything else falls into place on its own,” says Abou-Ganim, who runs a mixology consulting firm and is set to release his first DVD, titled “Modern Mixology,” next year. “In this drink, the fresh blackberries and spearmint provide most of the flavor; everything else is just accompaniment.”

Abou-Ganim also enjoys modernizing cocktail classics, and has done just that with his Corpse Reviver No. 2. This drink, available at Eyecandy Lounge inside the Mandalay Bay, is a variation on a classic recipe by renowned mixologist Harry Craddock. You can make it yourself with equal parts gin, Cointreau, and Lillet, an orange-flavored aromatized wine.

To this trifecta, Eyecandy bartenders add fresh lemon juice and a splash of absinthe, a highly-alcoholic, anise-flavored spirit that was only recently legalized for distribution in the U.S. Abou-Ganim says that while mixologists previously had to settle for absinthe substitutes (such as Pernod, Herbsaint, or another pastis), the ability to use the real thing expands their creativity

“The good news is that anything with absinthe will be a big deal because it’s something that was deemed illegal,” he predicts. “The even better news is that most of the cocktails that incorporate it are incredibly complex, wonderfully flavorful, and entirely unique.”

Not up for one of these innovative concoctions? Three other modern improvements on classic cocktails in Vegas are turning heads, too:

At the Petrossian Bar in the lobby of the Bellagio, try an authentic Cable Car, which combines Captain Morgan Spiced Rum, Marie Broussard Parfait Amour, Orange Curacao and fresh lemon in a cinnamon sugar-rimmed cocktail glass.