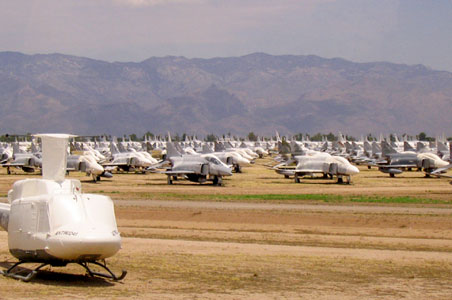 You have got to take a moment and watch this video recently produced for Airman, the official magazine of the United States Air Force. The beautiful, tender short takes viewers through the 309th Aerospace Maintenance and Regeneration Group (AMARG), commonly known as the "Boneyard," at Davis-Monthan Air Force Base in Tucson, Arizona. The article that accompanies the video describes AMARG as a "2,600-acre parking lot and storage facility for about 5,000 retired military aircraft," ranging from B-52 Stratofortresses to C-5 Galaxies.

But what the AMARG really represents is the history of military air combat in the United States, the machinery of war, and the pilots who loved it. Retired planes here stand ready to offer their parts to active duty aircraft, or after they endure a long preservation process, are returned back into service. Rather than a pit of skeletal remains, says the author, the Boneyard is a place of rebirth.

Bus tours of the Boneyard are offered by the Pima Air and Space Museum in Tuscon, Arizona. Tickets are $7/adult and $4/child, and seats are first-come, first-served. Call 520-574-0462 for tour times and other information.

Deanna Cioppa is a freelance writer and editor based in New York City. When not in the air or on the road, she can be found bellied up to a raw bar, martini in hand, or in the mountains, martini in pack. She’s a regular contributor and guest editor of Fodors.com, and has written for Gadling, BudgetTravel.com, ShermansTravel.com, GO Magazine, and others.  www.deannacioppa.com or @likeitsmyjob