The perfect combination of sun, sand, and sea helped make Cancún one of Mexico’s premiere resort towns back in the ‘70s. Now another factor must be added into that equation: people—lots of people. Cancún’s Zona Hotelera (the high-rise hotel corridor) is hopping. And even once-sleepy villages further south—known collectively as the Riviera Maya—are experiencing a boom. If you want non-stop action, this is the place to be. If not, look west. There is a good deal of ground to cover, but fear not: we’ve done the legwork for you. 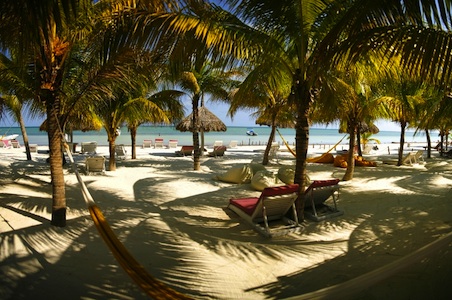 Vacationers who want to play “castaway”—or ones who believe that old saw about the journey being as important as the destination—can reset their GPS for Isla Holbox. Getting to the island typically involves a two-and-a-half hour overland trip northwest to Chiquilá, followed by a 20-minute ferry ride across the shallow Yalahua Lagoon—and, thanks largely to its limited accessibility, Holbox (pronounced hol-bosh) provides the perfect antidote to over-built Cancún. Forget crowds and concrete. Fewer than 1,500 people live on this 12-square mile isla, and the streets aren’t even paved; rather, they are sandy tracks traversed by golf carts.

Like the island, resorts here are beguilingly small. Case in point is Casa las Tortugas. It has all the prerequisites for a relaxing holiday—starting with B&B rates that won’t stress you out (doubles begin at just $95). The 21 guest rooms seem tailor-made for lounging; outside, hammocks and chaises scattered around the pool offer further opportunities for indolence. Oh, did we mention that the resort also boasts the island’s only spa and fronts a blissful beach? If you can rouse yourself, the hotel can arrange kite surfing, fishing, and turtle watching, plus up-close encounters with the supersized whale sharks that congregate offshore each summer. 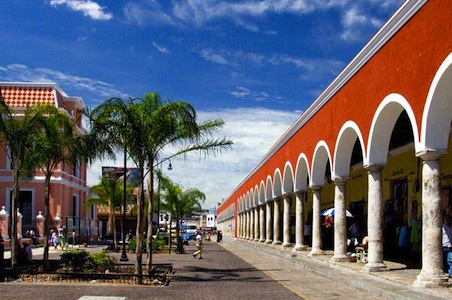 For an urban alternative, head 200 miles west of Cancún to Mérida. It is something of a miracle that the Yucatán state capital has maintained its under-the-radar status. Said to be one of Mexico’s safest cities, it has gracious boulevards that can be toured by horse-drawn calesa, handsome heritage buildings, a leafy main square, markets bulging with quality crafts, and atmospheric eateries serving local cuisine—in other words, all of the elements that add up to “Old World charm.” Yet the relative dearth of foreigners makes you feel more trailblazer than tourist. The same holds true at outlying sites such as Dzibilchaltún, a 15-minute drive north.

Though not as grand as Chichén Itzá, Mérida’s Mayan temples and ancient cenote (a sinkhole once used for human sacrifices) are still impressive. Best of all, you clamber over the former or swim (as locals do) in the latter without tripping over tour groups. Afterwards, take your pick of—count ‘em—four Fodor’s Choice hotels ranging from Rosas & Xocolate (doubles from $235), a hip-meets-historic boutique hotel in the heart of Mérida, to Hacienda Xcanatun (doubles from $260), a glorious 18th-century plantation house on the outskirts. This being Mexico, cost-conscious accommodations like Hotel del Peregrino (doubles from $60), are plentiful, too. 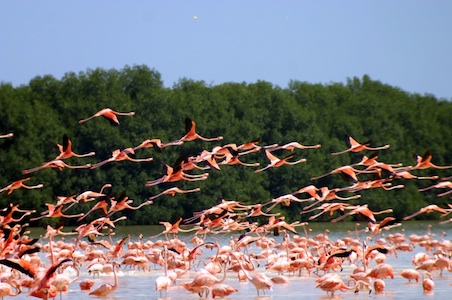 Ready for a walk on the wild side? Travel another hour west from Mérida and you’ll eventually reach the 146,000-acre R’a Celestún Biosphere Reserve. Party animals are rare here. Real animals are not. Spider monkeys, anteaters, ocelots, and endangered jaguars are just some of the mammals that call this biosphere home. However, birds (300-plus species) are the star attraction—the most notable being bubble gum-pink flamingos that flock in by the thousands.

If you want to join these feathered residents, your bar-none best lodging option is Hotel Xixim (doubles from $204). In part that’s because this intimate resort makes a logical base for exploring. After all, its tour menu includes bird-watching junkets, fishing trips, kayak excursions and after-dark boat rides showcasing the biosphere’s nocturnal residents. All that aside, Xixim is a simply a fine place to bed down. Its 32 palapa-capped beachfront bungalows are low-key and low-tech: they don’t have TVs for philosophical reasons or air conditioners for ecological ones (thatched roofs and fans let air circulate the old-fashioned way). What they do have is oodles of style. Their calming contemporary colors, clean lines and (in the case of master suites) Lilliputian plunge pools are enough to make even the well-heeled want to kick off their shoes.

Frequent fodors.com contributor Susan MacCallum is a proud Canadian. But in winter she prefers snorkel gear to snow shovels, so Mexico holds great appeal. When not on the road, Susan lives in Halifax, Nova Scotia with her husband and two children.