In the fourth of a series of articles about travel to Mexico, Fodor’s Editor Kelly Kealy talks about a recent trip to Michoacán state.

With “authentic” being such a travel buzzword these days, it’s tempting to take its use with a grain of sal. When I heard the word used to describe Michoacán, particularly Morelia, Pátzcuaro, and the smaller towns dotting the adjacent Tarascan Plateau, I’ll admit I was a little skeptical. But if authenticity is measured by pride in regional history and efforts toward continuity of culture, then “authentic” is right on the dinero, as I learned on a recent press trip.

Morelia: Not Just About the Butterflies

Mexico’s Michoacán state isn’t just about its famous butterfly migration (though that is a pretty spectacular draw; if you’re here from early November to early March and can spare a full day, head to the Santuario de Mariposas el Rosario). It’s also where you’ll find some of the best-preserved colonial architecture in all of Mexico. In fact, the entire town of Morelia, the capital of the state of Michoacán, was named a UNESCO World Heritage site in 1991; most downtown buildings date from the 16th century and are made of ubiquitous locally-quarried “pink stone”—really more of a beige, but whatever you want to call it just try not falling in love with the place at sunset. An aqueduct dating from the 1700s runs through the center of town; it’s in great shape too (though no longer provides the city’s drinking water), and is enchantingly lit up at night. 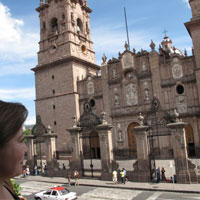 The main architectural event, though, is arguably the Cathedral—built between 1640 and 1744 and with a façade full of ornate carvings. Thoroughly professional English-speaking tour guides can be found through the Secretaría Estatal de Turismo (Palacio Clavijero, Calle Nigromante 79; 443/312–3641); hire one at the very least to take you through the Cathedral’s fascinating history (which reflects the history of the region itself). My travel companions and I toured downtown’s buildings with a guide named Déborah, and her enthusiasm for all things historical was catching in the best possible way. 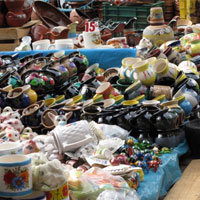 But why all the contemporary excitement over history, you might be wondering? Turns out Michoacán isn’t called Mexico’s Heartland for nothing. Mexico’s independence from Spain owes some of its momentum to a local bishop’s notion of human rights. To learn more about this we traveled to Pátzcuaro, about an hour’s drive southwest of Morelia. This was home base for Michoacán’s first bishop, Don Vasco de Quiroga, known affectionately around these parts as Tata (father) Vasco. He ignored Spain’s suggestion to enslave any rebellious indigenous Purhépecha and instead encouraged a system of town-based, self-directed craft specialization that exists to this day and has made the region home to some of the most beautiful, professionally-executed crafts around. For example, copper goods come from Santa Clara de los Cobres, mimbre (straw or reed items) and pottery come from Pátzcuaro proper, a different kind of pottery comes from Capula, lace comes from Aranzo, and fanciful ceramic devil creatures come from Ocumicho—to name just a few.

If a whirlwind tour of the Tarascan Plateau sounds overwhelming and you’re eager to see a few samples and craftspeople in one place, head to La Casa de Los Once Patios, a workshop-slash-marketplace with a little bit of everything. (And if you see something that looks like a ceramic hen, ask “puedo abrirlo?” and lift off the top when you get the all-clear; inside you’ll find a tiny statuette pair demonstrating an activity that may make you blush.)

However, each town has happenings throughout the year, and if your visit coincides with one, you really shouldn’t miss it. Our trip happened the weekend of the guitar fair in Paracho, and we got to listen to an outdoor rock concert with locals, bargain hunt for jewelry with one of our hosts (our excitement was mutual over the delicate wooden rings for sale), and watch the mayor pose for pictures with the three young finalists for the title of festival queen. 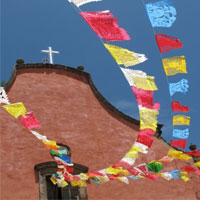 Yes, Michoacán has immaculately-preserved architecture, and the craft towns themselves are a kind of living history museum. But the best part of the trip—the most “authentic,” you could say—for both the Americans and the Mexicans in our group was visiting the smallest indigenous communities here. Nurio, for example, is so small that when we arrived a bit early and the church attendant hadn’t yet gotten there with the keys, a sufficiently proactive step was for someone to get on the town center’s loudspeaker and call for anyone with a spare set of keys to stop by. Five minutes late were were in, enjoying the church’s mix of traditional iconography and modern additions like neon bulbs sculpted to spell out saints’ names.

Members of these small communities are also actively creating ways in which pre-Quiroga Purhépechan culture itself is accessible to visitors. In the tiny Santa Fé de la Laguna, for instance, a group of Purhépecha women have just begun cooperatively running several simple, clean hotels whose draws include the opportunity to participate in traditional cooking. We paid a visit to Hostal Echeri (01 454/35 4–9217), a beautiful place with multiple courtyards full of shady lime trees and delicious smells from the kitchen. On the menu were tortillas that we could help cook; small sardine-sized whitefish from nearby Lake Pátzcuaro, lightly fried and highly addictive; and plenty of mezcal, which we drank from small handmade clay vessels on strings that we’d been presented with upon arrival, placed like leis around our necks: welcome to Michoacán.

If you’re headed to Michoacán state as a side trip from, say, Mexico City and only have time to visit Morelia (about 4 hours by road), you can still take in the state’s varied craft offerings and meet a few artisans at the Casa de las artesanias del Estado de Michoacán. And if you’re concerned such a tiny dip into artisan and indigenous culture might not be authentic, contact the Secretaría Estatal de Turismo and ask to be put in touch with Déborah—she’ll set you straight.

Morelia Airport, a 20- to 30-minute drive from the city center, has direct flights from major U.S. cities (Houston, Chicago, Los Angeles), or you can catch a half-hour connecting flight from Mexico City (or hire a driver/take a bus from there; the ride takes about 4 hours).