News Christina Mueller Yes, You Can Visit Los Angeles Without a Car. Here's How to Use the L.A. Metro Subway System
NewsUndiscovered Hawaii: The Big Island 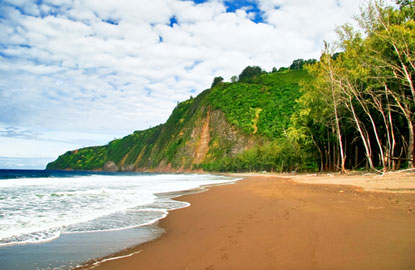 With its erupting Kilauea Volcano, Hawaii’s Big Island promises something new at every visit. But for people more interested in culture, community, and cuisine than lava, there are plenty of changes afoot. The Big Island’s most popular tourist destination, Waikoloa, has kicked the offerings up a notch and is currently erupting with energy of its own.

Kona’s Waikoloa region might be known for its stunning resorts and plush condos, but there is a new kid in town—one that is changing the face of this tourist region. Owned by the guys behind Kona’s famed Huggos on the Beach, the Lava Lava Beach Club and Restaurant recently splashed on the scene, making waves with locals and tourists craving sophisticated accommodations on the sand. The four cottages feature beach chic interiors that would make any interior designer smile. Think bubble gum colored daybeds topped with heaps of pillows, bowls of seashells, ukuleles hung from the walls, local art featuring surfers, a wide comfy bed with views of A’ Bay through the floor to ceiling windows, an outdoor rock shower, and a kitchenette. Sit on the lanai with a flaming blue cocktail and watch the sunset over the Pacific Ocean. Or meander over to the restaurant where you can bury your toes in the sand and sip microbrews and fill up on fish tacos while musicians serenade the setting sun.

Food in Waikoloa doesn’t come cheap. And the Mauna Lani Bay Hotel’s Canoe House Restaurant might cost a pretty penny. But with the addition of new chef Allen Hess, every morsel is worth the money. Sit along the coastline, with tiki torches ablaze as the sun descends over the sea and get to know some of the freshest Hawaiian seafood on the island. Hess only offers what can currently be sourced from the ocean, so his seafood, like the indulgent coastal salad or the furikake-crusted ono, is enough to make even the most serious foodie giddy.

Inside the Mauna Lani Bay Hotel, the organic coffee growers and roasters Mountain Thunder have opened a shop—pleasing locals and tourists who had, up until recently, not been able to find a killer cup. If that’s not enough, sign up to visit their farm and roast five pounds of your own organic beans to take home for friends and neighbors.

Waikoloa breeds stunning strands, but if you want to get away from the crowds, park at the Mauna Lani Bay Hotel. Ask the valet for directions to the black sand beach. You’ll walk south along the coast, past the golf course, to a hidden black sand beach lined with houses where you will find some of the finest snorkeling in Hawaii. But shhhh, don’t let the secret get out. For now, the beach is rarely visited by anyone but locals and a snorkel boat that docks here every so often.

Okay, so you come to Hawaii to don a bikini, but on the Big Island, you’ll need to lug a sweater as well. The Big Island can get cold, especially if you are heading up to the volcano, Mauna Loa, or nearby Waimea Town to grab a bite to eat.

Want more undiscovered Hawaii? Check out ‘Undiscovered Molokai’ and take a look at our insider’s guide to Kauai’s West Side.