Undiscovered Bahamas: Top 15 Things to Do in the Exuma Cays

If you’re looking for a true escape—a vacation where you’re more likely to see giant starfish, wild iguanas, swimming pigs, dolphins, and sharks than other people—visit the Exuma Cays in the Bahamas. The archipelago stretches about 80 miles northwest from Great Exuma, the chain’s main island and activity hub, relatively speaking.

You’ll want to spend a couple days boating and floating through the 365 cays (one for every day of the year, as the locals say), most uninhabited, some owned by celebrities. But I recently spent one day hitting as many islands as I could. If a trip to the Exumas isn’t in your future, slap on some sunscreen, blend up a pina colada, and join me in some (virtual) island hopping.

View Treasure Map for the Exumas in a larger map 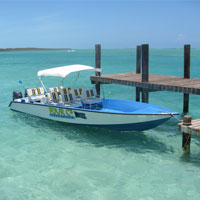 We started our adventure in Barraterre, on Great Exuma’s northern shore. Pat Smith of Four C’s Adventures (242/464-1720, www.exumawatertours.com) was our trusty captain and guide. Born and raised in the Exumas, he definitely knew the best spots to show us. A full day expedition with Four C’s starts at $700, and the boat seats up to 12 people.

Can you believe the color of that water? You’ll notice how much the shade shimmies from sea green to sapphire in the rest of the photos. It’s the prettiest water I’ve ever seen.

Our first stop came before we hit the first island. Locals call the water surrounding the first few cays the Starfish Reserve, where tons of starfish dot the ocean floor. I had never seen them so big! As long as you don’t keep them out of the water for too long, it’s okay to pick them up. And the water is extremely shallow, so it’s easy to find them.

A little ways past the Starfish Reserve, our guide dove in the water and had no problem coming up with several conch shells. He later used them to make us some tasty conch salad, the Bahamas’ version of ceviche. Besides the raw conch, which you pull out from the shell, the dish includes chopped onions and peppers, lime and orange juices, and whatever spices you want to throw in. Watch the video to see how our guide created this tasty dish for us, fresh from the ocean floor.

It was so exhilarating to step on a footprint-less stretch of sand and make the first mark. Visit in the morning during low tide for the most sand. I’d love to spend a few hours hanging out here with a good book—complete solitude! 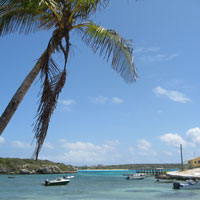 If you’re looking for a little civilization, stop off at Little Farmer’s Cay. It’s the first inhabited cay in the chain, about 40 minutes (18 miles) from Great Exuma. The island has a restaurant and a small grocery store where locals gather to play dominos. But don’t expect too big of a party; just 70 people live on the island.

Staniel Cay is the activity hub in the cays, and a favorite destination of yachters. That’s thanks to the Staniel Cay Yacht Club, the only full service marina in the cays. Shack up in one of the cotton candy-colored cottages, some perched on stilts right in the water. The club’s restaurant is the place to be for lunch, dinner, and nightlife. An airstrip, grocery store, and a few shops round out the island’s offerings.

Just across the water from the Staniel Cay Yacht Club is Thunderball Grotto, a marine cave that snorkelers (at low tide) and experienced scuba divers can explore. It definitely was a bit of work paddling inside, and then once in I felt somewhat claustrophobic, but it was worth it! Now I can say I snorkeled inside a cave. The grotto was featured in the James Bond films Thunderball and Never Say Never Again.

Swine flu is so 2009. Take a dip with swimming pigs at Big Major’s Cay. These guys aren’t shy; as you pull up to the island they’ll dive right in and swim out to greet you. Don’t forget to bring some scraps!

Compass Cay is the perfect deserted island boater’s paradise. Tie up your boat, grab a cold Kalik beer out of the fridge, and hang out on the dock with boaters from around the world. Don’t let the big guys swimming below scare you; they’re harmless nurse sharks. (Check out that conch salad video for a visual!)

Spanning 22 miles, the protected Exuma Cays Land and Sea Park, the first park of its kind in the world, boasts some of the best snorkeling and diving in the country. Since its waters have essentially never been fished, it’s like seeing what the ocean looked like before humanity. For landlubbers there are hiking trails and birding sites. 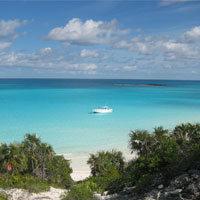 If you boat around to the back of the Exuma Cays Land and Sea Park, you can climb up to one of its highest points. To do so, you need to wade through shoulder deep water and climb up a rocky path, but the 360 view is so worth it!

Another great stop-off point for that 5-o’clock-somewhere cocktail and good Bahamian cooking, Norman’s Cay’s one restaurant, MacDuff’s, has a Margaritaville feel. If you’d like to spend the night, two guesthouses face the ocean (242/357-8846, www.ncbcmacduffs.com). In the 1970s and 80s, the island was the private domain of Colombian drug smuggler Carlos Lehder. 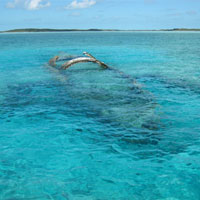 This plane, crashed off Norman’s Cay in the early 80s, was supposedly part of Carlos Lehder’s operations. Although I didn’t get in the water, the snorkeling here is said to be great, since the water is so shallow.

Does anyone ever get sick of secluded sandbars? Saddle Back was another beaut, and guess what? Not a single soul in sight. Keep your eyes peeled for sand dollars.

For this stop all you’ll need are grapes and a stick. Sounds like a strange order, but Allan’s Cay, at the tippytop of the Exumas chain, boasts hundreds of wild iguanas. They’re not scaredy iguanas; just pop a grape on your stick and they’ll come crawling out for a snack.

Direct flights are available from Miami or Fort Lauderdale and take about 1.5 hours. Prices start around $350 in high season (Christmas–April). Exuma International Airport is about nine miles outside of Georgetown, the island’s capital.

If you’d like to spend a few days on Great Exuma (which I highly recommend) before your island hopping adventure, these hotels are our Fodor’s Choices in various price ranges.

Augusta Bay. The perfect balance of luxury and laid-back, without the megaresort feel, this 16-room resort on 300 feet of narrow beach is a mile west of George Town. Under new ownership, rooms underwent a $2 million renovation in 2008. French doors open onto private patios or balconies that overlook the pool and a beautiful white sand beach. Starting at $275/night in high season. (full review)

Club Peace and Plenty. This pink, two-story hotel is in the heart of the George Town “action.” Rooms have private balconies overlooking the pool or ocean; this will become your favorite place to have breakfast. There’s no on-property beach, but its Beach Club on Stocking Island is a five-minute ferry shuttle away (free for guests). In high season the hotel is known for its Friday-night parties on the pool patio, where Lermon “Doc” Rolle has held court at the poolside bar since the ’70s. Starting at $180/night in high season. (full review)

Grand Isle Resort and Spa. This luxury resort picks up where its neighbor, the former Four Seasons, left off. The five-year-old, 78-villa complex boasts a spa (the only one on the island), an infinity pool overlooking the ocean, and a poolside patio restaurant. A secluded patch of Emerald Bay Beach is right off the pool, and guests can use kayaks and snorkel equipment. Rooms are elaborate, and vary from one-bedroom garden-view villas to four-bedroom penthouses. All have fully loaded kitchens, private patios, washers and dryers, and come with your own golf cart. Starting at $460/night in high season. (full review)