Berlin is one of those cities that relates to just about any interest. Whether heading to Germany’s capital to shop, sample traditional German cuisine, or explore alternative street art and wall paintings, Berlin rarely disappoints. Yet, it can be tricky to navigate the city, as each neighborhood caters to a specific crowd and it’s easy to get lost in its contrasting districts. When it comes to Berlin, each neighborhood is as uniquely fascinating as it is different and while it may be confusing at first, it ultimately adds to the city’s global appeal.

A quick trick to determining your location and neighborhood is by looking at the crosswalk lights. In former East Berlin, these lights depict an old-fashioned man wearing a stylish-looking fedora hat while those in former West Berlin resemble a far less amusing sign but are fairly similar to those seen in other European cities. 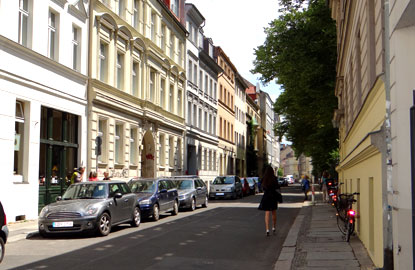 Perfect for: Seeing the city’s most recognized monuments, memorials, and landmarks

Mitte is generally considered Berlin’s city center mainly due to its name, which translates to “middle” and its geographic location. Mitte is also where Berlin’s most recognizable city monuments and memorials are found, making this area an ideal starting point for first-time travelers. Museum Island, Brandenberg Gate, and Alexander Platz are just three popular Mitte tourist attractions that will look familiar to the photographs you’ve surely seen in guidebooks.

Serving as the historical center as well, Mitte has an old city charm with a modern feel, as seen through the many coffee shops, restaurants, and art galleries lining the streets. It’s a place where old cobblestoned streets and modern high-rise buildings exist in harmony. 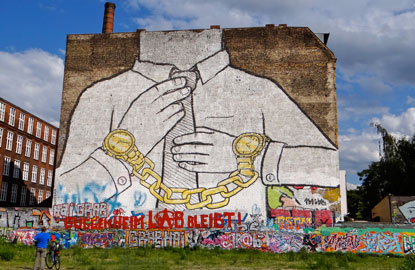 When it comes to Berlin’s most notorious district, there’s no arguing that Kreuzberg-Friedrichshain takes first prize. Although technically two separate neighborhoods, many of the same lifestyle trends are found in both areas. There is a large Turkish community in Kreuzberg, made clear by the large, outdoor cable dishes set up outside each apartment, a necessity for watching Turkish TV. The district also attracts other nationalities, young people, and artists looking for a creative environment. It is especially known for its edgy collection of graffiti and wall paintings.

After crossing The Oberbaum Bridge along the River Spree, Kreuzberg ends and Friedrichshain begins. The spot also marks the East Side Gallery, the former Berlin Wall now serving as a memorial of 150 wall paintings from a slew of international artists. Just behind the gallery is one of Berlin’s most popular hangouts, the Ostrand Beach bar.

Insider Tip: For more time at Berlin’s “beach,” check out some of the other beach bars along the River Spree including Badeschiff, a man-made beach with a large swimming pool next to the water and loud electronic music playing by night. 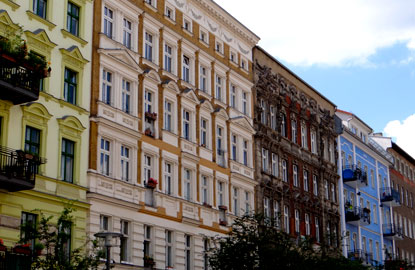 Upon reunification, low rents immediately drew artists and other creative professionals to Prenzlauer Berg, but after significant gentrification, the area has become more upscale. While nowadays most young hipster types prefer to party the night away in punk-driven Kreuzberg, Prenzlauer Berg is still one of the most sought after neighborhoods to live and work in. Trendy designer boutiques, art galleries, restaurants, bars, and cafes are never hard to find. The neighborhood also has a penchant for a green and organic lifestyle.

In many ways, Prenzlauer Berg is a combination of its neighboring districts. It has the touristic appeal and artistic influence of Mitte, but a young student population still comes here to eat, drink, and party as they do in Kreuzberg.

Insider Tip: Head to Mauerpark on Sundays for their local vintage flea market to score the best deals or stop by later in the day to experience an outdoor live karaoke party with local Berliners. 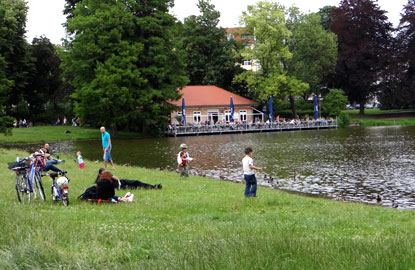 Perfect for: Families looking for upscale shopping and dining

Kreuzberg hipsters rarely find themselves in Charlottenburg-Wilmersdorf, two neighborhoods that have merged into one district. Located in former West Berlin, Charlottenburg-Wilmersdorf primarily attracts families and more upscale types. Since the fall of the Berlin Wall, this area has continually embraced change to benefit the community. Historical sites include a part of the Tiergarten and the Charlottenburg Palace, while the 32-storey “Zoofenster” contributes to a more cosmopolitan, urban setting.

Thinking of a trip to Berlin?

For up-to-the-minute hotel and restaurant recommendations, as well as the best planning advice, check out our Berlin Travel Guide.