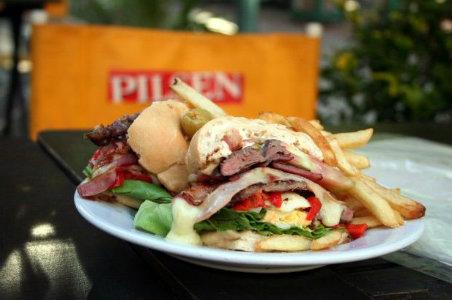 Right now I'm living for the World Cup, which happens to be a great starting point for reading about international cuisine. Over at Bon Appétit, Matt Gross issued a call for popularizing Uruguay's chivito (think of it as an über Philly cheesesteak) in the U.S. Meanwhile, FiveThirtyEight is conducting a World Cup of food, and only 16 nations remain. I'm probably more excited to see who wins that than the actual tournament. —Michael Alan Connelly, Editor, Fodors.com

I just finished Herman Koch's new novel Summer House with Swimming Pool. It's definitely darker than your typical summer beach read but I thought it was riveting. I'm still thinking about it. I love the book jacket design, too. —Caroline Trefler, Senior Editor, Cities and Cultural Destinations

Two articles caught my eye for their different perspectives on the much-maligned Millennials: In The New York Times, the focus was on boomerang kids moving back in with their parents. The Atlantic has a different take: the same group is moving out and hitting the road, hiking the Inca Trail or climbing the Himalayas. Their point—that travel is helping prepare them for their future—is inspiring. —Mark Sullivan, Editor, Cities and Cultural Destinations

I've been reading—and rereading—my friend Paula Kahumbu's recent essay in The Guardian about the tragic death of Satao at the hands of poachers. He was one of Kenya's largest and most adored Tuskers, and the world will miss him. I simply cannot believe he's gone. —Kristan Schiller, Editor, Cities and Cultural Destinations

I've cycled through stages with Led Zeppelin: idolization, scorn, indifference, appreciation, all of the above. This fun piece in Slate reminds me that I'm not alone in these feelings. —Luke Epplin, Associate Editor, Countryside and Adventure

I needed Paris, vicariously. Ernest Hemingway's memoir A Moveable Feast captures the City of Light in the 1920s, conjuring its cafes and street life, and enticing with knife-sharp portraits of F. Scott Fitzgerald and Gertrude Stein. The restored edition from 2009 reveals Hemingway in a more honest light and includes previously unpublished sketches that showed me writing (and life) aren't as simple as some of Hemingway's sentences. —Linda Cabasin, Editorial Director

This week I've been dipping into Jonathan Franzen's essay collection, Farther Away. The title essay recounts his experience in traveling to a remote South Pacific island in the wake of the suicide of his friend, the writer David Foster Wallace, (while somehow also encompassing a potted history of the novel form in English), and will be familiar to many form its publication in The New Yorker in 2011. The other pieces are equally wide-ranging ruminations on his great loves (birds, fiction) and his bugbears (modern technology) in beautifully compressed prose. —Róisín Cameron, Associate Editor, Countryside and Adventure